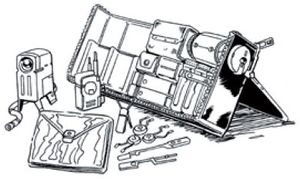 The Apple-Churchill Personal Surveillance Kit is a special investigative kit from Apple-Churchill used by the Maskirovka, the feared intelligence agency and secret police of the Capellan Confederation. Small enough to fit within a backpack, these kits contain a bevy of surveillance and espionage equipment: forensic devices, undetectable to the naked eye, able to collect hair, skin and fingerprint samples; hacking software that can be loaded into a personal computer; and a full-body catchall suit which prevents the operative from leaving behind any evidence of having entered the target's home or office. The video and audio monitors can be hidden within innocuous locations such as light fixtures and can transmit in either burst or continuous mode.[1]