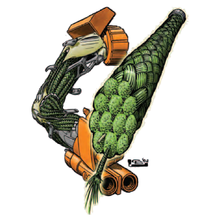 Myomer is an artificial analog of biological muscles with a greater strength to weight ratio. They are engaged with electrical current and its strength depends on the amount of fibers activated, not the current provided.

Myomer requires large amounts of electrical voltage to function, with the larger "muscles" obviously requiring more energy than smaller ones. However, they have high electrical resistance, causing large amounts of waste heat which needs to be dispersed or the fibers will fry themselves. This does however grant an advantage as myomer cannot be stunned by electrical discharges. Additionally, metal armor and skeletons have a low electrical resistance, channeling and discharging any strong electrical hits into the ground.

In a way, myomer is the reason BattleMechs are the supreme war machines they are; the myomer is an extremely efficient and load-bearing form of locomotion, but cannot be used in a wheeled, tracked, or airborne platform due to the nature of its operation. As such, even though BattleMechs present much greater surface area that must be armored, and much more structure to be carried, myomer still allows them to bear more weapons and armor per-ton than any other form of armored fighting vehicle.[citation needed]

Myomer is composed of microscopic polyacetylene tubes filled with an acti-strandular fiber. These fibers are created by mixing biologically engineered bacteria with specific polymers within the tubes. An electric current is sent through these tube, causing the fibers to arrange themselves into a complex nano-structure similar to the proteins myosin and actin that allow biological muscles their movement.