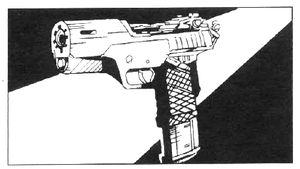 The Sternsnacht Python Auto-Pistol was designed to be a smaller, lighter version of Sternsnacht's more famous heavy pistol, though it bears little resemblance and features an extended ammo capacity. Build by Sternsnacht, brand-name recognition alone helped propel sales of the Python in the Chaos March during Operation Guerrero, especially when it became the weapon of choice for the action star of hit holoshow Warrior II Ace Slater, followed by Sternsnacht slashing the pistol's price and flooding the market with it. The Python has since become the most-sold pistol on Epsilon Eridani, and compared to the Claymore, it carries more rounds and has a greater range (though it has earned a reputation for inaccuracy at long ranges).[1][2]