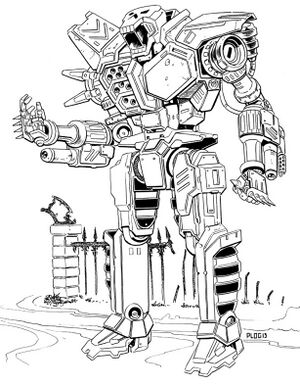 Cadaver in the striker unit role

Striker is a battlefield role performed by certain models of 'Mechs, as well as other ground units. These units are relatively fast, lightly armored, and equipped with heavy, close-range weaponry.[1][2]

Strikers are generally fast BattleMechs, second only to scouts, and armed with what would be considered a loadout of heavy, close-in weapons. They tend to fit between scouts and skirmishers on the combat platform spectrum, because they are better armed than the former but less lightly armored in comparison to the latter. In their strike role, they rely on their speed, running in to face the enemy units and letting loose with as much firepower as they can unleash quickly. Generally operating in lance formations with other strikers, they'll attack one designated target until it is removed as a battle-capable unit. While often costly in 'Mechs, these bold tactics often result in significant damage to the enemy.[1][2]

When operating in a mixed-role formation, strikers are best paired with heavier units (such as skirmishers) that can still keep in weapons range, to provide the needed support or to take advantage of the open target the striker has provided. This affords them the relative security of speed (or numbers, if swarming). Movement is the striker's key advantage, taking care to utilize cover as much as possible until they have closed to short or medium range with their target. BattleMechs, ProtoMechs and fast combat vehicles often represent the striker role.[1][2][3]

In Alpha Strike, a unit is identified as a Striker when it meets the following standards[2]:
Speed: Fast
Armor: Light to Medium
Range: Short
Special: no requirements