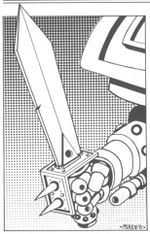 While most 'Mechs are equipped with ranged weaponry, melee weaponry is also both feasible and useful due to increased damage (over a punch) and a lack of heat buildup. The Sword is a melee attack weapon used by some BattleMechs. Developed in 3058 by the Draconis Combine[1] as an "honorable" alternative to the "crude" Lyran Hatchet, the Sword inflicts almost as much damage as a Hatchet and offers a better hit probability due to its exceptional balance.[1]

The most notable 'Mech equipped with a Sword is the No-Dachi, but many more can be found in the complete list of Hatchet or Sword using BattleMechs.

In the BattleTech board game, the Sword is swung in the physical attack phase at -2 to hit[2], dealing a point of damage for every ten tons of the 'Mech's weight, plus an additional point.[1]

The Sword was introduced in Unbound and has since been superseded by the rules above. In fact Unbound specifically states that the sword was not suitable for tournament play and didn't introduce the weapon into general use.[3] The Unbound sword did normal punch damage, but offered a -2 bonus to the attack roll. It weighed one ton for every twenty tons of 'Mech weight.[4]

Swords are manufactured on the following planets: