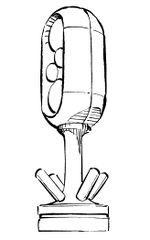 Image of a VTOL Mast Mount

Introduced in the Pre-Spaceflight Era, the Mast Mount is mounted on the top of a VTOL's rotors. A VTOL using a Mast Mount can use cover, and be able to see over the cover, while protecting itself from enemy fire. Mast Mounts were generally not found on modern VTOLs due the reduced size of them as compared to their pre-spaceflight predecessors.[1]

The mast is considered one level higher than the craft it is mounted on. It is always mounted above the Rotor. This allows for VTOLs to use spotter aircraft while hovering behind buildings, hills and other obstructions.[1]

The mast is designed to allow a VTOL to mount sensors and other nonweapon equipment (example; C3 computer systems, active probes, ECM suite) above the main rotor. Weapons and combat equipment including TAG & Narc cannot be placed in the Mast.[1]