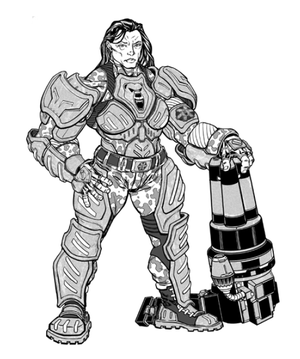 The "Bearhunter" Superheavy Autocannon is a variation of the Semi-Portable Autocannon developed by Clan Hell's Horses. As one of the few Clans proficient in deploying conventional infantry, Clan Hell's Horses designed the "Bearhunter" to improve their offensive capabilities by using three rotating barrels to prevent overheating and achieve a greater rate of fire than the original at the expense of cost and effective range. Also, like the semi-portable autocannon, the "Bearhunter" cannot incorporate recoil compensators but can be used by a single individual by means of a gyroscopic harness.[1]