The Adventures of Clan Spaniel 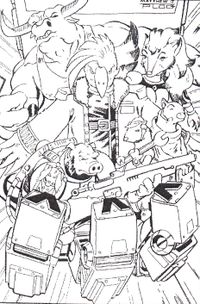 "The Adventures of Clan Spaniel" is one of the most popular entertainment shows among the preteen children of the Clans Merchant Castes. [1]

"The Adventures of Clan Spaniel" revolved around a series of anthropomorphic warriors led by their parrot Khan Polly on a never-ending quest to liberate their homeworlds from five tribes of evil monkeys, thinly veiled analogs for the Successor States. While all of the show's characters are based on animals which the Clans consider pets—an attempt to avoid the promotion or denigration of any individual Clan—the show provides a means of teaching its young viewers overall Clan virtues, with each episode a morality tale or illustration of some aspect of Clan life.[1]

When relaying information about the show as an example of the media available in the Clan Homeworlds to his father, Khan Phelan Kell commented that in most respects it greatly resembled the shows of his childhood in their methods of teaching the morals and ethical values of each Inner Sphere nation.[1]

MechWarrior Online would also use Clan Spaniel for an April Fool's joke in 2018, introducing the Corgi BattleMech supposedly piloted by a member of Clan Spaniel named Pembroke.[3]