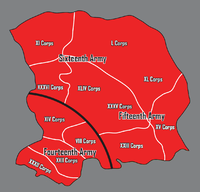 The Draconis Combine Military Region was created by General Shandra Noruff-Cameron, the first Commanding General of the SLDF, to organize all SLDF forces that were located in the Draconis Combine.[1] It corresponded to the borders of the Draconis Combine. The DCMR was then divided into three districts. District 1 was bordered by the Terran Hegemony and the 250 light year circle. The systems between the 250 light year circle and 500 light year circle were split evenly into Military Districts 2 and 3.[2] Each military district was assigned its own Army,[3] and these three Armies were organized as a part of Army Group Kurita, with their overall headquarters located on Dieron. The General in command of Army Group Kurita also represented the SLDF in Combine political matters.[4] All SLDF naval assets in the Federated Suns Military Region were overseen by a Vice Admiral.[5]

In 2764 the Fourteenth Army was assigned to District 1, with the Fifteenth and Sixteenth Army assigned to Districts 2 and 3, respectively. This gave Army Group Kurita a total strength equivalent to 106 divisions.[6] The Fifteenth and Sixteenth would take part in the New Vandenberg Uprising, and the entire Army Group fought in the Hegemony Campaign during the Amaris Civil War.