The Game News magazine was a magazine with related articles on roleplaying games, war games and other adult games. 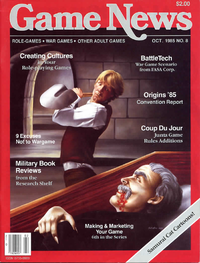