Morton "Mort" Weisman, the father of FASA co-founder and BattleTech co-creator Jordan Weisman, joined FASA as CEO in 1985. His long-time experience in the publishing industry helped FASA to expand into a major game publisher.

In the spring of 1967 Mort Weisman, then president of A. C. McClurg, a wholesale book distributor, happened to be teamed with Martin Miller at a golf course during a vacation to Las Vegas. Miller, lawyer of the late Adam Swallow, learned of Weisman's involvement with books and asked him for advice on how to proceed with a possible sale of Swallow's publishing house. Weisman convinced Miller and Swallow's widow Mae to sell it to a group of people including himself in July 1967, and moved it to Chicago under the new name 'The Swallow Press'.

In August 1968 Weisman sold his interest in A. C. McClurg's and went to work for The Swallow Press full-time in January 1969 as president and production manager. 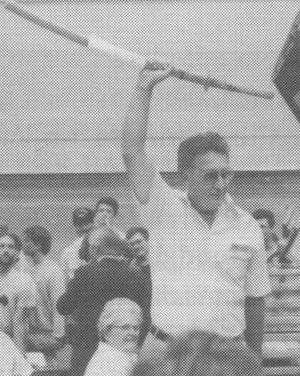 Mort Weisman at GenCon 1988
In 1985, Mort Weisman joined FASA, his son Jordan's firm. Having worked in the publishing industry since 1962, Mort Weisman brought the experience that was required to organize FASA as it grew into a major game publisher, and also editor Donna Ippolito who would serve as FASA's chief editor. Between 1986 and 1991, FASA published twelve novels and one anthology for the BattleTech universe besides a multitude of rulebooks, sourcebooks, and game supplementals as well as other games, most notably Shadowrun which—being primarily a role-playing game—was also a gaming universe driven by novels. Roc Books took over the novel line in 1991.

On 25 January 2001, a FASA announcement signed by Mort Weisman and L. Ross Babcock III announced that FASA was closing its doors. Reportedly, Mort Weisman had been speaking about retirement for himself and percieved the gaming market to be in a downswing. FASA subsequently ceased its active operations, but remained as a corporation holding intellectual property rights which are licensed out to other publishers (some sources claim, apparently in error, that the IPs were sold).[1]

Mort Weisman was appointed president of WizKids Publishing, an in-house publishing division for WizKids, in 2003.[2]