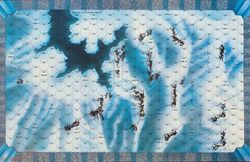 Boreal Reach is the most popular of the Open Arenas which make up the Solaris Games, gladiatorial fights between BattleMechs that take place on Solaris VII. Located in the Black Hills sector of Solaris City and governed by House Davion, Boreal Reach was originally a cold climate battlefield until the recovery of Star League lostech allowed its renovation into a high-tech arena with changeable terrain. Despite its update the arena's most popular setting is its original tundra setting and it remains known by its original name.

Construction of the Boreal Reach began in 2786 as a consortium of corporations, the United Federation Corporation, converted four square kilometers of abandoned industrial area into an enclosed arena featuring vast snowfields, ice caves, snowstorms and subzero temperatures; two geothermal power plants were simultaneously built to maintain these arctic conditions. The arena proved immediately popular and Boreal Reach matches were among the most top-rated broadcasts for many years. However, the recovery of the Helm Memory Core in 3028 provided UFC with the knowledge and impetus to design something even greater. Starting in 3036 the arena underwent a massive reconstruction effort, with the grand re-opening designed to coincidence with the War of 3039. While the war itself was less than successful for the new Federated Commonwealth, the reveal of the re-imagined Boreal Reach was a smashing success: using the best in Star League technology the arena could replicate just about any type of battlefield imaginable. Boreal Reach quickly became the most popular of all Solaris City arenas, and every effort was made to broadcast its matches throughout the entire Inner Sphere.[1]

Like Black Hills as whole, Boreal Reach suffered heavy damage as a result of the Word of Blake occupation of Solaris, most notably being the devastation of its advanced climate control and holographic terrain systems. While the Davion Arena remains popular following the Jihad, lack of funds and resources mean the rebuilt but much less advanced Boreal Reach is arguably a shadow of its former self.[2]

The revitalized Boreal Reach uses state-of-the-art technology, known collectively as the Universal Terrain Generation System, to replicate a variety of battlefield conditions. Holographic projectors located throughout the arena project photorealistic images onto solid objects to give them mass and volume; for example, the image of a fir tree might be projected onto a cone-shaped obstacle or an office building on a rectangular cuboid. These objects are designed to be easy and cheap to replace, though inevitably the projectors themselves will take fire and need to be swapped out, adding significantly to the expense of maintaining the arena. The projectors are controlled by the arena's advanced computer systems, which also tie into the weather, temperature and sound systems to create an immersive battlefield environment. The UTGS operates best when simulating the terrain found on Terra - forests, deserts, swamps, and the original arctic tundra landscapes. Underwater and vacuum conditions are possible but less realistic, requiring Actuator limiters and the use of aerosols and lighting tricks to suggests combat on the ocean floor, while replicating zero-G conditions are impossible.[3]

Following the heavy damage inflicted on Boreal Reach during the Jihad, the crippled UTGS was removed and climate control system partially rebuilt. The post-Jihad arena still has simulated terrain in the form of temporary constructions and set-piece modules but the terrain options are greatly limited, they have to be manually placed by work crews and can only mimic the look and effects of the chosen terrain. Likewise the rebuilt climate control system is much more limited, though it can still rapidly shift between hot and cold it cannot go any lower than -10 C at the lowest and 40 C at its highest point, still cold enough to support artificially-produced snow and ice but not to the previous extremes for which the arena was famous for. The arena's now less advanced weather simulation equipment also can only replicate rain, snow, fog and light-gale force winds.[2]

Boreal Reach has a total capacity of 76,000, with spectators viewing the combat on closed-circuit Tri-Vid monitors. General admissions costs 35 C-bills and allows for viewing on large-format monitors, with seating for 70,000. Tickets for one of the 4,000 box seats costs 60 C-bills, while a private booth can be rented for 100 C-bills.[4]