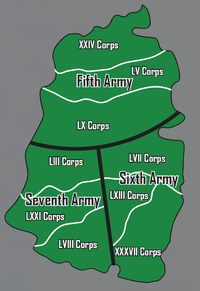 In 2764 the Fifth Army was assigned to District 1, with the Sixth and Seventh Army assigned to Districts 2 and 3, respectively. This gave Army Group Liao a total strength equivalent to 50 divisions.[6] The Sixth and Seventh would take part in the New Vandenberg Uprising, and the entire Army Group fought in the Hegemony Campaign during the Amaris Civil War.