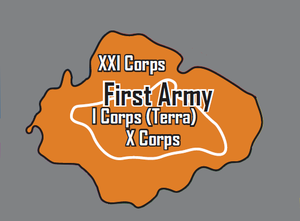 The Terran Military Region was created by General Shandra Noruff-Cameron, the first Commanding General of the SLDF, to organize all SLDF forces that were located in the Terran Hegemony.[1] It corresponded to the borders of the Terran Hegemony, and had the largest percentage of Star League Defense Force Royal Divisions, with its headquarters on Terra and Mars.

All SLDF naval assets in the Terran Military Region were overseen by a Vice Admiral.[2]

As a result, only a single army, the First, was assigned to the region in 2764, with a strength equivalent to 25 divisions. However, as part of the New Vandenberg Uprising, the redeployment of SLDF forces to the Periphery had reduced the strength of the Terran Military Region to less than ten divisions.[4] The Rim Worlds Republic Military was brought in to shore up the region's defenses, however this would prove to be a ploy by Stefan Amaris in his plot to overthrow House Cameron and gain control of the Hegemony.