The Corps (subtitle: BattleCorps Anthology Vol. 1) is a print anthology of 17 short stories previously published via BattleCorps, and an 18th, previously unpublished story (Destiny's Challenge) that continues the storyline of Destiny's Call.

It also includes a Foreword by the editor, Loren L. Coleman, how BattleCorps came into being; an "About the authors" section at the end; and a collection of BattleMech illustrations in the back.

The cover depicts a climactic scene from one of the stories (Isolation's Weight). 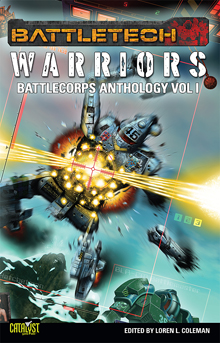 The anthology was also published in EPUB/Kindle format on 3 June 2010. In this format, the cover title reads "Warriors" instead of "The Corps", presumably an alternative title going with the tagline from the back cover ("Warriors all"), although the product information still calls it "The Corps".