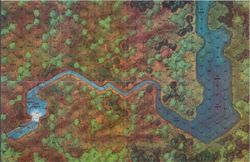 The Jungle is the House Liao Open Arena of the Solaris Games. Built within the Cathay sector of Solaris City, the arena offers a tropical space to hold gladiatorial fights between BattleMechs. Even during the darkest days of the Confederation, the Jungle has served as a point of pride for the state, and money is no object in making sure the arena is kept in top shape.

The Jungle was originally meant to be a Buddhist temple, but construction was terminated while it was still half-completed in 2770. House Liao took over the site and assigned Geraldo Ling to turn it into a gladiatorial arena. Ling in turn hired noted architect and Capellan chauvinist Vladmir Veltovic for this purpose. Veltovic, whose devotion to the Capellan state was matched only by his ego, crafted his final design to represent his belief that architecture serves the state. The Jungle would not just serve as a gladiatorial arena but to impress upon the citizenry of the magnitude and monolithic authority of the state. The Jungle opened to glowing reviews and catapulted Veltovic to the height of his popularity. Unfortunately this was soon followed by his disastrous "Monument to the Inevitable Triump of House Liao" on Teng which the Chancellor called "an obscenity and an affront to the decency of the Capellan state" and he quickly fell out of favor. Regardless, the Jungle has continued to serve as Cathay's most popular destination and earned the controlling Ling family vast sums from concessions and broadcasts of its matches.[1]

The Jungle is a huge pyramidal structure to which are attached secondary structures for 'Mech maintenance, spectators and other functions. Within its ferrocrete shell is enclosed a lush, tropical interior, an attempt to replicate the jungles of Spica. Groundskeepers periodically change the landscape of the Jungle to prevent MechWarriors from getting too comfortable: where one week there was a fast-flowing stream there might instead be a small lake the next or a stand of trees afterwards. BattleMechs are transported into the interior via underground elevators, where the teeming foliage combined with the high temperature and humidity encourages close-ranged slugging matches with quick resolutions; it is quite common for duels to end in furious hand-to-hand combat as both 'Mechs operate on the edge of overheating.[1]

In the center of the arena, beneath ten meters of ferrocrete, is the underground command bunker. Exceeded only by Boreal Reach's command center, the bunker incorporates total weather and lighting control, allowing the arena manager to make it rain or have night turn into day, as well as control the Tri-Vid cameras carefully spotted and camouflaged among the landscape. The bunker is also in charge of deactivating any landmines or other bobby traps which have been added to the arena, an important safety feature for the maintenance crews or when the Jungle is opened to the public for sightseeing and picnicking.[1]

During the Jihad, the Cathay District of Solaris City suffered severe damage and the roof of the Liao Arena collapsed forcing the closure of the venue after 3070. When The Jungle finally reopened in 3082 it was without the upper levels of its trademarked Asian-style pyramid. The arena floor was left wide open to the elements and debris from the original structure was largely left scattered across the floor of the venue allowing much of the cultivated gardens to overgrow the shattered chunks of ferrocrete and fragments of classical architecture. Meanwhile, the arena seating and supporting facilities were completely redesigned, improving the overall comfort for staff and spectators alike.

With little more than scaffolding to support a mix of stadium lights, holo-cameras, high-powered speakers, and a ballistic-deflecting mesh, the floor of The Jungle no longer benefits from the artificial weather produced in the arena’s pre-Jihad heyday, but few competitors have noticed the difference thanks to Solaris City’s usual weather patterns. Meanwhile, the other well-recognized features of this venue—including the waterfalls, the periodic traps, and the moving battle - boundary markers — have been retained.[2]

Seating for the Jungle is fairly large with a total capacity of 51,000, though the quality of the seating varies dramatically. At the very top are the 1,000 private booths, with tickets going for 100 C-bills. Here spectators lack for nothing: fine dining salons, palatial restrooms, even conference rooms. The action can be observed through private holovid tanks with individual controls to switch between cameras at will. Below that are the 30,000 general seats, available at 25 C-bills a ticket, where the matches can be watched on large-format, high-resolution flatscreens from wooden benches. Food vendors roam about offering food and drink while members of the Capellan Reserves conduct security patrols. Lastly is the standing enclosure, with room for 10,000 spectators packed together like sardines at 10 C-bills a ticket. Here fights often break out as people attempt to watch the match through small, black-and-white screens and often have to be put down with liberal usage of stun grenades. Unfortunately for both general and standing audiences, the number of public restrooms available are wholly inadequate to the task, leading to long lines (and an unfortunate smell which permeates the standing enclosure).[1]

There is a bay, part of an immense series of caverns dug out from underneath the complex known as "the Jungle". Each bay held different classes of 'Mechs by weight and by stable, which are themselves filled with armories, 'Mech berths, loading docks, and ammunition holding areas. Ever-present betting stations overflowing with gamblers seemed to fill up the remainder of the useable floor space.[3]