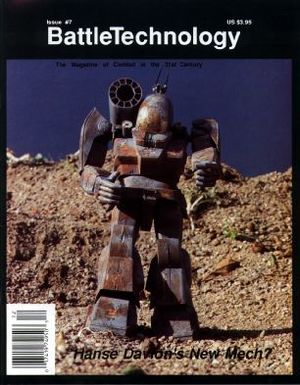 The existence of the ALI-1A Alliance BattleMech was announced in 3028 in the lead-up to the wedding of Hanse Davion and Melissa Steiner. It was described as one of the "wedding presents" from a combination of NAIS scientists and leading Lyran 'Mech designers to the couple. While the Alliance was allegedly originally intended to be deployed in regimental strength, it failed to achieve production, even during the flood of new and recovered designs produced in the 3030s and 3040s following the discovery of the Helm Memory Core.

Intended to "out-Atlas the Atlas", the Alliance was to field massive quantities of a new composite plasti-ceramic armor intended to give greater resiliency than ordinary plate. Its Vlar 300 fusion engine was also supposed to contain new systems possibly sourced from an old Star League supply/repair base. Finally, "new, improved" NAIS-80 heat sinks were installed to handle heat from the weapons array.

In the long run, the existence of any of these new systems—perhaps prefiguring Ferro-Fibrous armor, XL fusion engines, and double heat sinks—remained unproven, and the only technical data available indicates the use of standard equipment in all cases. The fact that the Alliance never entered service could mean the advanced systems failed to live up to their promises, or may never have existed outside Davion-supplied propaganda. Despite the supposed existence of 20 prototypes undergoing testing at the NAIS, the only hard evidence of their existence is a photograph of one Alliance in what appears to be a field repair unit (though the physical appearance is reminiscent of a modified BattleMaster).

The Alliance was later expressly described (written from an out-of-universe omniscient perspective - in another Apocryphal source) as a hoax that never really entered production [1].

The Alliance was designed around a heavy long-range weapons load—two Whirlwind Type 10 Autocannons and a medium-sized Delta dart LRM-10 rack. With only one ton of ammunition per weapon, the Alliance would soon be forced to rely on the three Diverse Optics Type 20 Medium Lasers carried for close-in defense.

The Alliance was first reported in BattleTechnology, which is not counted as a canonical source anymore. No information exists besides the report, which in and of itself might be biased or erroneous.