The Particle Projector Cannon (or PPC) is an energy weapon, firing a concentrated stream of protons or ions at a target with damage resulting from both thermal and kinetic energy.[4] Despite being an energy weapon, it does produce recoil. The lethality of the weapon rivals that of higher-caliber autocannons; just three shots from a PPC will vaporize nearly two tons of standard military-grade armor.[5] During the Star League era, multiple hits from certain PPC models were known to scramble electronics, until the SLDF introduced dampers. These proliferated to the armies of the Great Houses and beyond during the outbreak of the Succession Wars.[6] The ion beam also extends to much farther ranges than autocannon fire, though PPCs generate large amounts of waste heat, the earlier prototype versions (produced between 2439 and 2460) even more so.

PPCs are equipped with a field inhibitor to prevent feedback that could damage the firing unit's electronic systems.[7] This inhibitor degrades the performance of the weapon at close ranges of less than 90 meters. Particularly daring warriors have been known to disengage the inhibitor and risk damage to their own machine when a target is at close range.

Considered by some observers as the best weapon produced by Anderson Armaments, when linked to the Garret GRNDTRK 9 targeting and tracking system the weapon would prove to be particularly deadly.[8]

Used in the armament of the original Warhammer 6R and BattleMaster BLR-1G.[11] Manufactured at various locations throughout the Inner Sphere and Periphery, it is distinct for the long 'barrel' and blocky power chamber.

The Kinslaughter PPC has a well-known reputation for difficulties with its insulation, generating additional heat if not properly maintained and making preventive maintenance more of a priority than other weapons of the type.[20]

The most common PPC produced in the Draconis Combine, the Lord's Light is an exceptional model noted for its compactness and flexibility, allowing it to be mounted on the right arm of 35-ton Panther while still retaining the hand.[23]

Unlike other PPCs, the Parti-Kill Heavy Cannon does not use an energy collection capacitor or similar chamber, instead using a series of magnetic collection bottles that gather plasma straight from the 'Mech or vehicle's Fusion Reactor. The resulting energies are then channeled through a larger magnetic bottle and released from the cannon as an energy "shell" that is unstable at ranges of less than ninety meters and loses cohesion and disintegrates at 540 meters.[31][32][33]

The Tiegart Particle Projection Cannon provides similar performance to the Donal PPC while being ten percent smaller. Unlike the more common Donal however, even during the Star League era Tiegart replacement parts were more scarce with fire control suffering greatly without a steady supply of parts, even with several redundancy circuits providing backup if needed.[38] Production of the Tiegart PPC ended during the destruction of the early Succession War with designs utlizing the more compact PPC being reworked to use the more common Donal PPCs. [39] 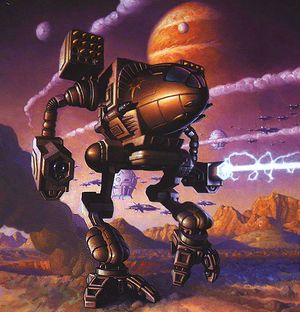