The Tamarind March was a military region of the combined Federated Commonwealth, based in the Lyran half of the super-state.

After the setbacks during the War of 3039, the Federated Commonwealth decided to completely reorganize its military into a single entity. [1] To that end, the Ford and Cavanaugh Theaters of the Lyran Commonwealth Armed Forces were reorganized into a single military March. The new March included much of the Commonwealth's border with the Free Worlds League. [2]

When the Clan Invasion struck in 3050, the Tamarind March was only indirectly affected for the most part. It did see a minute reduction in the number of AFFC troops posted to its borders, going from over 15 Regiments in 3050 [2] to 14 regiments by 3054. [3]

In 3057, Katherine Steiner-Davion claimed the title of Archon and severed the Lyran half of the Commonwealth, renaming it the Lyran Alliance and abandoning the AFFC . With this move, the Tamarind March was effectively dissolved, with the Tamarind March Militia was reorganized into the new Province Militias.

The Tamarind March consisted of the following military theaters : [2] [4]

The March consisted of many important worlds, most notably Hesperus II, home of Defiance Industries, the largest Battlemech factory in the Inner Sphere. It also included Bolan, an important political world that became the capital of the new Bolan Province when the Lyran Alliance seceded from the Commonwealth. 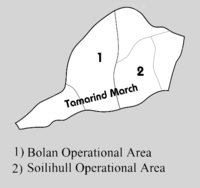