This article is about the novels. For the in-universe media, see Warrior Trilogy (Trivid).

The Warrior Trilogy is an early BattleTech novel series by Michael A. Stackpole, initially published by FASA as print novels in the US in 1988 and 1989. The novels saw several reprints. For a time they were also published in EPUB (electronic publication) format including an omnibus edition released through BattleCorps in 2010; however, the electronic copies were withdrawn again after a short time and have not been available since 2012.

The trilogy consists of the novels

The novel follows the intertwined stories of Justin Xiang Allard, Daniel Allard and the Kell Hounds and Yorinaga Kurita and the Genyosha in the buildup to the wedding of Hanse Davion and Melissa Steiner and the Fourth Succession War that was launched during the wedding, as well as political machinations of Michael Hasek-Davion and of subversive elements within the Steiner nobility. ComStar is revealed to be a very powerful and ruthless agency who are following their own agenda behind the mask of a benevolent, pacifistic and neutral organization. 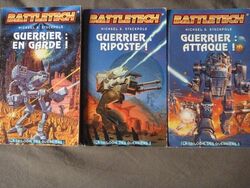 The three covers of the German 2005 reprint next to each other. Art by Franz Vohwinkel. Note the anachronistic appearance of a 3067-era Project Phoenix-style Marauder.
Retrieved from "https://www.sarna.net/wiki/index.php?title=Warrior_Trilogy&oldid=824239"
Categories: