Operation LIBERATION was the codename given to the liberation of Terra during the Amaris Civil War.[1] Begun on January 23rd, 2777, the operation would last until September 29th, 2779, with the personal capture of the Usurper Stefan Amaris by Commanding General Aleksandr Kerensky. As the final battle of the Hegemony Campaign and, indeed, the civil war, the effort to win back the seat of the Star League would prove to be a grueling affair, resulting in immense destruction and the loss of millions of lives. 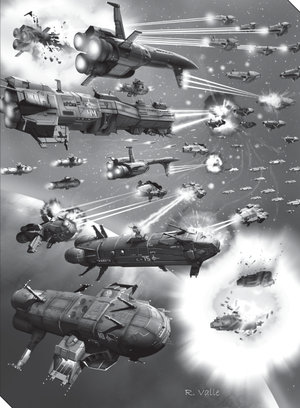 By the time General Kerensky had captured all the worlds closest to Terra, he had suffered significant losses: a third of his ground forces and nearly half his navy had been destroyed in the campaign to recapture Hegemony worlds. However, relief would come in the form of military supplies and refugee assistance from the Capellan Confederation, Lyran Commonwealth, and Federated Suns. As such, Kerensky still had nearly a thousand ships and over 100 divisions available for the invasion of the most heavily defended world in the universe.[2]

The Reagan Space Defense System was the largest and most powerful SDS ever built: besides the many dozens of ground-based laser and missile batteries, it included 250 Casper drone ships orbiting the planet and five heavily armed and armored battlestations protecting both jump points. Unlike prior SDS which had been more easily defeated once electronic countermeasures were developed, the Reagan was more robust; brute force would be the only means of defeating it.[1][3] Garrisoning the planet's major cities and Castles Brian were Republican divisions fanatically loyal to the self-styled "Emperor" Amaris.[4] Most of these divisions, including elite formations, were positioned on the North American continent, protecting Unity City and Amaris.[5]

General Kerensky and Admiral Janos Grec, commander of the Star League Navy, spent several months devising the invasion plan, in the mean time offering Amaris a chance to surrender; the Usurper, who had begun losing his sanity since the beginning of the Hegemony Campaign, refused in a rambling message. The finalized plan first called for the destruction of the jump point battlestations through the use of automated "fire ships."[3] 20 JumpShips would carry 60 Overlord DropShips, with weapons stripped for extra armor and packed with explosives, to perform suicidal kamikaze runs in an effort to take them out. With the jump points clear, the waiting fleet of 932 WarShips and transports would jump in from eight different worlds and make a high-g burn for Terra. Because speed was critical, it was decided the distance between jumping ships would be reduced to one-fourth, in order to fit in more ships per jump, and to give each group five minutes to clear the jump point before the next group jumped in.[3]

While the fleet was en route to Terra, a second task force of 40 WarShips would use a Pirate Jump Point to jump close to the planet and destroy as many Casper drone ships as possible before the main fleet arrived.[3] Once the main fleet had destroyed the rest of the drones, Aerospace Fighters would be launched to take out 30 key laser and missile batteries on the European and Asian continents, allowing the transports to land the ground forces and begin the reconquest.[4] General Kerensky knew this would be the last, greatest battle of the civil war, and on January 23rd, twenty minutes prior to the invasion's launch time, he gave a taped address to the entire fleet.[3] 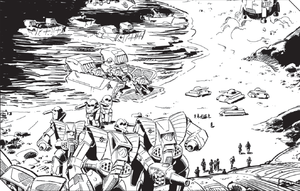 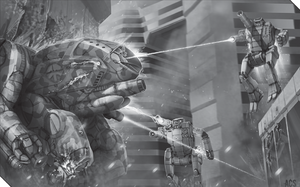 Star League in combat on Earth 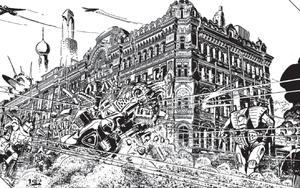 The battle for control of Terra's orbital space would become known as the largest space engagement ever in human history.[1] The automated "fire ships" jumped in and, although most DropShips were lost in the attack, all ten battlestations were destroyed.[3] With the jump points secured, the all-clear signal was sent and the fleet began jumping in. Despite the sheer size and complexity of the operation, only 20 ships failed to make the jump, with 18 suffering drive failures at their point of departures.[1] The troop transport Richardson suffered damage to its station-keeping drives upon arrival, and her captain ordered all DropShips to launch to save themselves. The Richardson would be destroyed when the corvette Mississippi Queen materialized with its prow inside her engineering section, though the latter ship would survive and retain enough functionality to clear the jump point before the next group appeared.[3]

Once the operation was complete, the fleet assembled into formation, WarShips forming a protective barrier around armored DropShip carriers, and made for Terra at speed. When the main fleet was four days away from the planet, the 40-ship flotilla jumped in and began a two-day confrontation with the Casper drone ships. When the last ship of the flotilla, the cruiser Sovetskii Soyuz, was finally destroyed, their sacrifice had accounted for the destruction of over 100 drones.[1][3] That same day, the remaining 150 drones began to engage the main fleet, shadowing it outside of weapons range before making small, swift attacks aimed at destroying as many transports as possible. In an effort to protect the transports, some heavily-damaged WarShips attempted to ram the drone ships; while most such runs were avoided, these efforts caused the drones to be more cautious, in part because of their confusion over such suicidal tactics.[4] Eventually, when the fleet was only 12 hours flight time from Terra, the entire drone force moved in to attack. The ten-hour running battle that followed was fierce, leaving a trail of debris in the wake of the two fleets; however as the melee dragged on the drones lost their tight organization and were eventually destroyed in a crossfire. While Kerensky had lost a significant portion of his fleet and ground forces, he had destroyed the entire drone fleet and was poised to begin the invasion of Terra.[4] 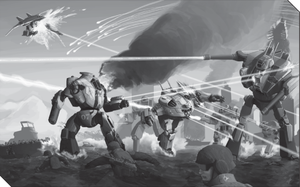 Star League in combat on Terra 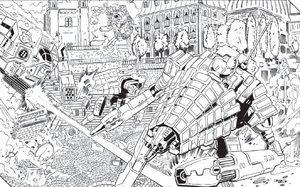 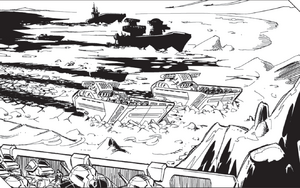 When the fleet was one hour away from Terra, flights of AeroSpace Fighters were launched to take out the key planetary batteries protecting the European and Asian continents. The fighters reentered Terra's atmosphere at an especially steep angle, in an effort to reduce their vulnerability to enemy fire, but still took heavy losses from ground-base fire.[4] Others were destroyed by defending Republican fighters or from the dangerous descent, and relatively few fighters were spared to defend the DropShips, having already started to offload their cargo, from being targeted by the enemy. However, despite extensive casualties and near-failure, the fighters succeeded in destroying all 30 SDS installations.[4] Those WarShips which did not stay to provide orbital fire support moved off to a safe distance.[1]

30 divisions landed on Terra during the initial drop, over an area stretching from Madrid to Magadan, with the goal of capturing major cities and spaceports. With the destruction of the SDS installations, their landings went mostly unopposed, as Republican ground forces maintained their garrison positions and fighter attacks were easily driven off.[4] Among those forces which landed was the 146th Royal BattleMech Division, supported by the 11th Mechanized Infantry Division, which landed within striking distance of Moscow. General Kerensky himself landed shortly after to take command of the attack to liberate his hometown. The defending 33rd Amaris Dragoons regiment was driven out of the city after brutal fighting and surrounded. After two hours of pleading for mercy, Kerensky finally accepted their surrender.[4] Amidst the rubble of Moscow General Kerensky was able to find his wife and two sons, who had been able to hide their identities and fought as part of the local resistance movement.[6]

Bitter fighting would follow for the next two years as the SLDF forces fought to retake control of Europe and Asia. The Republican forces were equally fierce and desperate, resorting to chaining together civilians as human shields to slow down the SLDF's relentless advance. By January of 2779, most of Europe and Asia was finally under General Kerensky's control.[5]

In an effort to spare any further loss of civilian life and hoping to end the war quickly, Kerensky decided to forgo the planned invasions of Africa and South America and instead invade North America.[5] The continent's SDS batteries were still operational, and the transoceanic tunnels connecting it to the rest of the planet had been severely damaged, requiring an expeditious plan of attack. On January 15th, orbiting WarShips and fighters launched a massive bombardment of the ground batteries as thousands of DropShips landed in the Mexican Republic. Simultaneously, a massive attack force led by the 322nd BattleMech Division and 9th Jump Infantry Division crossed the Bering Strait into Alaska.[5] Initial Republican efforts to repulse the invaders were intense and, at times, nearly succeeded. However Amaris would soon personally take control of the defense of the continent, and his skills as a strategist had been eroded by his ever-growing insanity. By March the northern force had worked its way into Canada and was moving along the coast towards Unity City, mirrored by the southern force moving along the Californian coast. Secondary fronts were opened up in Florida, Texas, and New York to tie down further Republican divisions.[5]

A final desperate effort was made by Republican forces to hold back the SLDF during the months of June and July. The southern force, spearheaded by the 135th Royal BattleMech Division, was held up for three weeks along the Colombia River before forcing their away onto the northern bank, while the northern force fought several furious battles over Vancouver Island.[5] By September 3rd, the two forces had pushed the Republicans to Unity City, first glimpsed advanced forces of the 9th Mechanized Infantry Division, and the final battles for control of the capital began. The Republicans were suicidal in their defense of the city, which only delayed the inevitable, and led by General Kerensky the SLDF forces finally took control shortly thereafter.

However, victory had not been complete, as Amaris had since fled to the Imperial Palace, built deep in the Canadian Wilderness. On September 29th General Kerensky's second in command, General Aaron DeChavilier, lead forces of the 26th Royal BattleMech Division in the capture of the nearby spaceport and, linking up with Kerensky leading the 328th Royal BattleMech Division, defeated the Republican garrison.[5] Kerensky, DeChavilier and two lances of 'Mechs made the final assault on the Palace itself, destroying the armored pillboxes defending it. Piloting his Orion 'Mech, Kerensky smashed open the Palace's doors and personally captured Amaris.[5]

Amaris gave the signal to surrender, and he and the thousands of surviving Republican troops were initially treated with respect as prisoners. Amaris and his family were kept in a luxury suite of rooms in a nearby hotel while their ultimate fate was debated.[7] That fate would be sealed two weeks after the surrender, when the Throne Room of the Court of the Star League was finally unsealed, and the rotting corpses of the Cameron family were discovered. Two weeks later, in the wake of the outrage that followed, Kerensky himself would travel to the scene of the crime. After thirty minutes of examining the Throne Room, Kerensky flew out to Amaris' hotel and ordered him and his entire family executed by firing squad.[7]

The destruction caused on Terra had been immense. Millions were dead or wounded, with millions more left homeless. The Star League itself was in shambles, its ruling family wiped out entirely, and the Defense Force had lost more than three-fourths of its original pre–Civil War force.[4] While many hoped that Kerensky would assume control of the Star League, events would conspire against him. With no new First Lord and the rival Great Houses already conspiring to pick apart the League's dead corpse, General Kerensky would lead one final mission: Operation EXODUS.