Fallout is a BattleTech comic series by Malibu Comics Entertainment Inc., inspired by the BattleTech animated TV series. Four issues plus a special edition labeled "Issue #0" were published between 1994 and 1995.

Although an official BattleTech product and published under a valid license, the Fallout comic series is not counted among the canonical sources of information by the current license owners, making it apocryphal.

While its storyline remains unconfirmed, there is no canonical information available that would contradict, rule out or otherwise challenge the Fallout storyline at large. 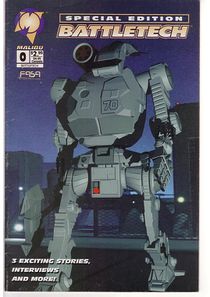 Published in February 1995 between issues #3 and #4, this "special edition" includes three very short stories all set in May of 3050, an "Introduction to the BattleTech universe" by Jordan Weisman, an article about Jordan Weisman and a section called "BattleTech Sketch Book" that gives sketches and brief descriptions of some of the characters.

The first story depicts a Jenner on patrol duty on Evciler where the pilot witnesses the combat drop of the Clan Jade Falcon assault force. The Jenner is quickly hunted down and a Timber Wolf (Mad Cat) steps on the cockpit, killing the pilot and declaring his intention to do this to the entire Inner Sphere.

The second and third stories show the Jade Falcon invasion of Somerset from different perspectives. At the military academy, the trainers put up an ineffective defense in a Wolfhound and two Centurions. One Centurion is marked "07" and the (unnamed) pilot has "Trainer 07" written on his neurohelmet. He is killed when his Centurion is destroyed by a Summoner (Thor), and a blond woman called Barbara (confirmed to be Lea Specter) gets very upset upon retrieving his lifeless body. 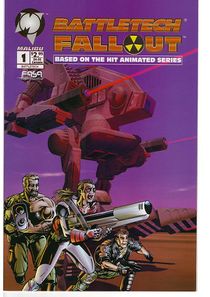 The Tramp-class JumpShip Ironclad arrives at Star's End in 3050, having fled from the devastating Jade Falcon attack on Somerset. However, the JumpShip and all but one of its DropShips are destroyed by asteroids in the Star's End system. Bedford Beauregard, who has been here before and knows the treacherous system, navigates the remaining small spheroid DropShip to the surface of a planetoid with breathable atmosphere and manages a crash landing. The survivors salvage a JagerMech (piloted by Beauregard), a Hollander (piloted by Hilda Lauber) and a Wolfhound (piloted by Uriah) from the wreckage.

In her HQ in the operations center of Movl, Star's End's port city, pirate leader Morgan Fletcher answers questions from a clansman named Raul about the unknown JumpShip and its DropShips when Star Colonel Darius interrupts them and demands to know what is going on. Fletcher explains that five of her 'Mechs have been sent to investigate the site of the crash landing.

The crash survivors manage to defeat the approaching 'Mech force (consisting of a Mad Cat, two Thors, a Mad Dog (Vulture) and a fifth, non-clan 'Mech). Uriah proves a highly capable pilot and his comments during the battle suggest he may himself be of Clan origin. Meanwhile, Lea Specter, another survivor from the DropShip, detects a recon jeep and subdues the driver to commandeer the vehicle.

Back at the Movl command center, confusion breaks out when contact is lost with the jeep and three 'Mechs approach the city complex. Raul explains to Fletcher that he is only of the merchant caste while Darius is of the warrior caste, and therefore Darius is the one to make decisions. When Star Colonel Darius appears, Raul desperately tries to explain that the situation is under control until Fletcher knocks out Darius from behind.

As the three 'Mechs from the DropShip approach Movl, Specter catches up in the jeep she captured. Beauregard suggests they head for Northridge Iron Works which doubles as the city's starport, but upon arriving they are immediately surrounded by Clan 'Mechs.

The first issue had two limited special editions with fancier covers. One featured a holographic cover, the other a gold print cover. 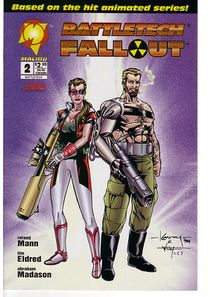 Beauregard and his followers surrender, although Specter disagrees. Raul then insists that Fletcher take the prisoners into custody which she does. Beauregard leaves with Fletcher for "negotiations" (in bed) where she informs him that she needs his unit for a special task. Beauregard is very unhappy about this, pointing out that his "unit" is really only a random collection of people. Meanwhile, the others discuss the situation in a bar and Lea Specter points out that she holds the rank of Hauptmann and should be in charge. Lauber, only a cadet, agrees while Uriah refuses to even state his rank. At that point Beauregard finally returns, and Specter confronts him with her rank. Introducing himself as a Lieutenant, Beauregard nevertheless claims command and knocks Specter down when she hits him, ending the discussion. Carl Stouffer, the barkeeper, helps Lea Specter up and tells her that he served with her father in the past.

Raul of the merchant caste and pirate leader Fletcher discuss how they will use Beauregard's unit to destroy a Clan Wolf production facility so that an unspecified work can only be carried out at the facilities of Star's End. Raul is clearly planning to establish a monopoly of some sort by destroying a competing facility.

Simulator battles show that Beauregard's unit is seriously lacking in skill, and prone to fighting among each other. Hauptmann Specter is unhappy with not being in command. Carl the barkeep asks Beauregard for himself and another man to be accepted into the unit as a 'Mech pilot, but gets into a fight with the drunken Beauregard over whether or not Morgan Fletcher is in with the Clans and knocks him out cold. However, after another few days of simulator training, Carl, Antonio Rulli and a female tech (Tasha) are accepted into the group. 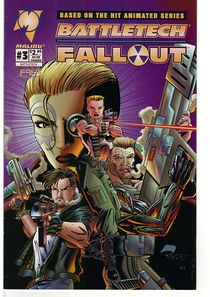 Beauregard's unit, now known as Fallout, launches their attack on the Clan Wolf facility. Lea Specter has been given a Rakshasa; Carl pilots a Catapult, Antonio a Raven and tech Tasha drives a tracked vehicle emblazoned with the Jade Falcon crest. While the vehicle remains at the drop point, the attack force divides into two groups of three 'Mechs each.

Back in Movl, Raul and Fletcher are arguing with each other and with Star Colonel Darius. Fletcher claims an escaped Inner Sphere pilot knocked down Darius, and that she had them all summarily executed. Darius remains suspicious.

The two Fallout teams encounter no resistance and destroy a naval repair yard and an ammunition dump. A man in a Federated Commonwealth uniform appears and signals to Specter's team. He leads them to a 'Mech hangar containing several BattleMechs. Meanwhile, Beauregard's team is attacked by a Star of Nagas that combat-drop on their position. Only the return of Specter's team saves them. Hilda Lauber is killed in the fight. After defeating the Nagas, Beauregard takes additional 'Mechs from the depot and the DropShip narrowly escapes Clan Wolf reinforcements, carrying twelve 'Mechs instead of the six it came with.

After their triumphant return to Movl with the unnamed FedCom soldier, Raul expects that the captured 'Mechs will appease Star Colonel Darius, but Darius is furious. He declares that Raul will be dealt with in the Clan way, then announces a batchall—the warrior caste will seize Star's End, as they should have done right away. 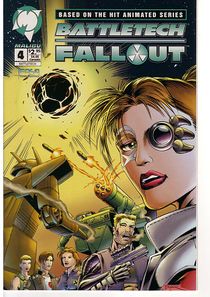 The Fallout unit, together with Morgan Fletcher (piloting a Wolf Trap), answer Darius' batchall and face off against a Star of Thors. By not adhering to the Clan custom of engaging the enemy one-on-one, they manage to defeat the first Jade Falcon force. Star Colonel Darius, enraged at this breach of the honor code, announces that he will send more troops. Morgan Fletcher explains to her allies that she had stuck a deal with Head Merchant Raul, of the merchant caste. Raul told the Jade Falcon that he had effectively bought Star's End, thus preventing an invasion. But now the invasion is taking place anyways, and she has to set her backup plan in motion.

The Jade Falcon reinforcements, a Star of Mad Cats, are led into a trap when the entire asteroid is blown apart. Darius scorns the defenders for killing themselves and, assuming all have died in the cataclysm, declares that he is sick of Inner Sphere cowardice. He orders his forces away and the Jade Falcon starships leave Star's End.

In a sealed command center that is still intact and floating on a piece of debris, Morgan Fletcher explains that she had scattered all important pieces of technology across other, smaller asteroids long ago; the destruction of the main asteroid was not the end of Star's End as Darius was led to believe, and Beauregard has now forged Fallout into a capable fighting force ready to bring the fight to the Clans.