An electronic countermeasures suite (or ECM) covers the area around the unit on which it is employed, disrupting sensors and communications. ECM suites exist for BattleMechs, battle armor, Combat Vehicles, and aerospace fighters.

While this article deals with specific ECM suites, all combat units, from 'Mechs to tanks to aircraft, are equipped with a basic level electronic warfare capability designed to make them harder to track and hit (especially by those not using with a modern Targeting-Tracking System).[1] These systems are also relatively easy to update to deal with unexpected threats: within months of the deployment of the Listen-Kill Missile during the War of 3039, the Draconis Combine had developed and distributed to their front-line units a software plug-in which rendered the missile ineffectual.[2][3] 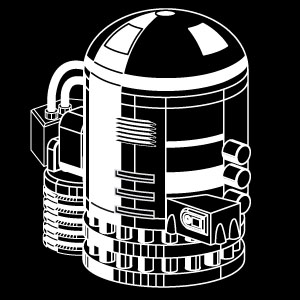 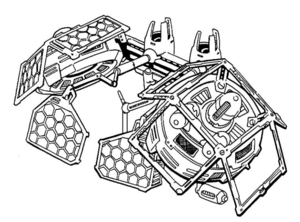 Though electronic countermeasures systems had been in use for centuries in the Inner Sphere, towards the end of the Age of War these systems had become ubiquitous: active camouflage, laser spoofers, and other countermeasures had made it so that many combat units were having difficulty finding and targeting each other until it was too late. In an effort to combat this fog of war, the Star League developed the Beagle Active Probe to cut through the haze of electronic jamming and locate units quicker and sooner than before. However the League soon became concerned that its Member States would acquire the Beagle and use it against them, leading to the development of the Guardian ECM Suite.[4]

The Guardian ECM Suite proved to be a powerful electronic warfare device, jamming the Beagle and other advanced electronic systems, but maintaining the system proved too hard for the Great Houses after the fall of the Star League. The system went extinct in the Inner Sphere in 2845 in the midst of the Succession Wars.[5] The Successor States were still able to maintain and produce ECM suites, but these were more primitive, less discerning systems, like those found on the Packrat. These jammers were powerful enough, for example, to block out all communications within a given area, but both friendly and enemy forces were equally affected by it. Commanders operating under such conditions would either have to lay down fiber optic landlines to maintain communication, or conduct their battles based on prearranged plans which might fall apart under ever-fluid battlefield conditions.[6]

Towards the end of the Succession Wars, the Capellan Confederation made a concerted effort to recreate the advanced ECM gear available during the Star League years in an effort to shore up their weakening position. While the resulting Electronic Warfare Equipment was a technical success, it fell far short of their expectations and failed to provide the edge they needed.[7] It would not be until after the discovery and decoding of the Helm Memory Core, and the renaissance in rediscovered lostech it created, that the Confederation succeeded in reintroducing the Guardian ECM in 3045.[5] In the years since, newer and more powerful ECM suites have been developed,[8] and new technology like Stealth Armor was designed to work in conjunction with these suites for even greater benefit.[9]

The Guardian ECM Suite, originally introduced in 2597, is a powerful electronic warfare device able to disrupt a wide variety of sensors and detection equipment while leaving friendly units unaffected. Unfortunately the complex system was too difficult for the Great Houses to maintain during the Succession Wars, and it went extinct in the Inner Sphere in the year 2845, until it was eventually recovered by the Capellan Confederation in 3045.[4][5]

Before the Helm Memory Core was decoded, the Capellan Confederation tried to recreate the Star League-era Guardian ECM suites. The resulting electronics package was known only as ECM Equipment when it appeared on the Raven in 3025.[10] Given the technology level of the Succession Wars era, it isn't surprising that this equipment was heavier and bulkier than the systems that inspired it. Interestingly, it could operate in either an offensive or defensive capability: It could seek targets like a Beagle, or hide the unit mounting it like a Guardian. As it weighed as much as a standard PPC, took up as much room as an Autocannon/5, and had only half the range of the Guardian, production halted when the Confederation began production of their own Guardian systems in 3045.[5]

The experimental Angel ECM Suite was based on the early Guardian suite by the Draconis Combine during the Clan Invasion. More powerful than the Guardian, the Angel ECM proved difficult to develop and saw only limited deployment at first.[8]

An ECM suite for battle armor was first developed for the Nighthawk power armor suit during the Star League era. The suite was later adapted for use on other battle armor designs.

In the Clans, the Guardian ECM suite never went extinct, and was used as the basis for an improved ECM Suite introduced by Clan Smoke Jaguar in 2832. This more advanced version of the Guardian, found mounted on machines in every Clan's touman, has the same capabilities as the original but is lighter and takes up less space.[5]