Developed by the Clans, Enhanced Imaging or EI is an advanced targeting and piloting system for use with humanoid shaped combat vehicles such as BattleMechs, battle armor and ProtoMechs. While offering considerable advantages, as well as serving as the only viable control method for ProtoMechs[1], EI inflicts serious side effects on the user, including possible mental instability, nerve damage and death. 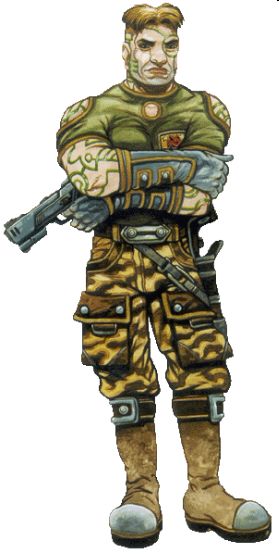 The Enhanced Imaging system combines two separate components, the first of which is an Enhanced Imaging Display. This advanced computer uses sensor data from friendly units in combination with preloaded terrain data to essentially create a more detailed "virtual reality" heads-up display. This component can be used by itself to aid in battlefield coordination and piloting, and by 3050 most Clan 'Mechs were equipped with EI Displays.[2][3][4]

The second and more dangerous of the EI components are Enhanced Imaging Neural Implants, which only work in conjunction with EI displays. Implanted just beneath the skin and connected to the subject's central nervous system, these implants not only replace the need to wear Neurohelmets but allow a person to access the EI system by thought and communicate with their machine instantaneously for superior reflexes. The drawback to these implants are significant, with those implanted liable to suffer feedback from internal damage to their machines in the form of potentially lethal electrical shocks, along with increasing mental instability which in a matter of years renders them unfit for duty.[2][4][5]

During the Clan Invasion, forces of the Inner Sphere first encountered warriors with EI implants in large numbers, leading them to believe the system was widespread in Clan toumans. In truth, about 5 percent of all Clan warriors choose to receive the implants, a recognition of their dangerous and painful side effects. The fact that EI warriors tend to operate in units together and that the system is more popular among Crusader-minded Clans, such as Clan Jade Falcon and Clan Smoke Jaguar, was responsible for the Inner Sphere's incorrect observations.[4]

In the development of the ProtoMech, Clan Smoke Jaguar used EI technology as a solution to the problems they were having with developing these machines, namely the fact that there was no room for a Gyro or standard Cockpit. The ProtoMech Enhanced-Imaging System works on the same basic principle of allowing the ProtoMech pilot direct neural control, essentially making them feel and control the ProtoMech as if they actually were the machine. This eliminated the need for a mechanical balancing system and meant the cockpit could be much smaller and so fit within the ProtoMech frame. Additionally, the genetically-enhanced brains and circulatory systems of Trueborn aerospace pilots could better withstand the stress of EI usage and stave off some of the negative side effects.[6][7]

In studying the potential for copying and using EI to build their own ProtoMechs, a number of Inner Sphere scientists discovered that EI implants could have medicinal benefits for people with certain degenerative conditions such as multiple sclerosis and muscular dystrophy. When fitted with EI implants, volunteers could exert normal control over their bodies, although this effect only lasted for the two to five years until the drawbacks of implant usages took hold. This usage of volunteers, who would receive appropriate compensation, was considered slightly more palatable than the alternative of young children and early teenagers whose bodies were believed to be more resilient to the system's degenerative effects.[8]

Although the Manei Domini developed a system similar to Enhanced Imaging for use in controlling their 'Mechs and vehicles, theirs was based on early DNI research not associated with the development of EI implants.

In CBT play a unit equipped with EI receives a -1 to Piloting checks; adds a -1 modifier per hex of forest, jungle or smoke terrain it fires through to a minimum of +1; ignores darkness modifiers; and allows an Aimed Shot attack with an additional +2 modifier (total of +5), which changes to a -1 modifier if also equipped with a Targeting Computer or against an Immobile opponent (for a total of +2). If internal damage is suffered the pilot must pass a 2D6 roll or suffer damage equivalent to an internal ammunition explosion.[9]