This summary article provides an overview of the "Unit Digest", "Stable Report" and "Ship Profile" type publications that have been published as exclusive content through the BattleCorps website.

Articles are listed here with the exact same name as listed on BattleCorps, irrespective of possibly deviating names within the document proper or the name of the downloadable PDF file. 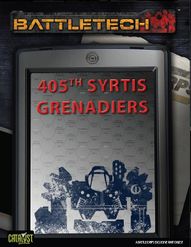 They may not have BattleMechs, and they may not be known throughout the realm, but the 405th Syrtis Grenadiers are soldiers just the same. Now offering one-off BattleTech and A Time of War gameplay aids!

Description of a conventional arms regiment and its four battalions as of 3080, including details on six individual members. 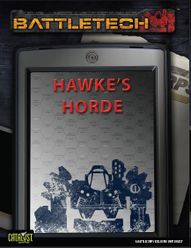 Hawke's Horde was a pirate group based in the Taurian Concordat just after the turn of the Thirty-First Century. They had a short-but-violent life.

Description of a small mercenary unit-turned-pirate force as of 3013. They consisted of a lance of 'Mechs and a reinforced armor company.

The initial version of this Unit Digest had a faulty random allocation table for vehicles which wrongly included the Savannah Master hovercraft; as this vehicle did not yet exist in 3013, the Unit Digest was updated with a corrected version that did not list this vehicle.

In his story "A Cover of Paint" Christopher Purnell introduced us to Killian's Commandos. Now see the mercenary company's unit digest!

The public "Mercenary today!" profile of the unit (as of 3027), annotated by one Adept VII Martin of ComStar with some behind-the-scenes information on their inner workings and conflicts.

Description of an Aegis-class WarShip in the Terran Hegemony navy while under the command of Captain Lindsay Rathbone between 2522 and some unspecified time after an incident in 2525. Includes brief information on the Repulse's attached DropShips (4 Vultures: THS Barclay, THS Grant, THS Boris and THS Earnestine) and Aerospace fighter contingent as well as background information on six notable officers.

A profile of the last of one of the great ships, just before its final battle.

Description of the DCS Galedon II, a Block II Samarkand-class carrier under Cho-sho Greg Hossu that was destroyed by the LCS Invincible during the 7th Battle for Hesperus II in 2853. Includes brief information on the Galedon II's Aerospace fighter and DropShip contingent during the Hesperus campaign (3 Achilles: DCS Katana, DCS Rapier and DCS Broadsword; 1 Mammoth: DCS Sabeeh) as well as background information for four notable officers.

Matthew Hawk shows us one of the smaller WarShips of the Rim Worlds Republic Navy, from just before the Star League fell!

A former Terran Hegemony vessel sold to the Rim Worlds Republic, the RWS Krait, a Tracker-class surveillance vessel, was mothballed for a time but reactivated in 2764 and refitted to serve as an ambush craft. Unwilling to serve Stefan Amaris after learning of his actions, Captain Birch and his crew took the ship and disappeared into the Deep Periphery in 2769.

An pair of DropShips consisting of an Intruder and a Leopard CV is named as the ones carried most often by the Krait.

A BattleCorps Stable Report is a gameplay aid designed to offer players a glimpse into one of the myriad unnamed and unknown smaller level MechWarrior stables in the Inner Sphere. This first report is a smaller stable on Solaris VII, in the year 3013.

Description of the Gilgamesh Stables, a small arena stable affiliated with House Marik with 18 'Mechs available to them. 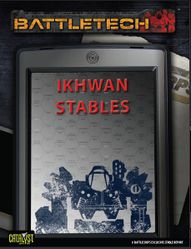 The Ikhwan, former Azami soldiers marooned on Westerhand by treachery, are trying to raise funds to return home. A BattleCorps Exclusive Stable Report.

Description of the Ikhwan Stables as of 3042, a small Westerhand arena stable affiliated with the Azami/House Kurita with 9 'Mechs available to them.