Difference between revisions of "Ian Dresari" 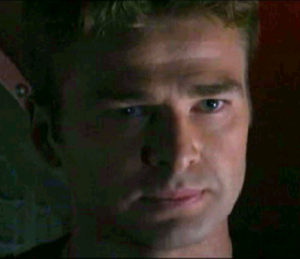 Duke Ian Dresari was a noble from the Federated Commonwealth world of Kentares IV. He became Duke after the murder of his entire family at the hands of Steiner Loyalists who had conquered his planet.

Ian Dresari was the son of Duke Eric Dresari, noble ruler of Kentares and a highly vocal political enemy of Archon Katherine Steiner-Davion. Ian was also the nephew of Armed Forces of the Federated Commonwealth Colonel Sir Peter Dresari, a MechWarrior commander in the Fourth Davion Guards, who held the noble title of Duke Sharpe, and was the brother of Duke Eric. Colonel Peter Dresari was the original leader of the anti-Steiner resistance on Kentares, but was later brutally murdered, leaving command of the resistance to his nephew Ian.

With two older brothers, Ian was far enough down the line of succession that he knew he was not destined for the planetary throne. Feeling overshadowed by his family and their noble history and reputation, with no way to distinguish himself, he adopted a profligate lifestyle that caused his father, Duke Eric, to disown him in disgust, though Ian's younger sister Johanna begged him not to.

Now that the pressure was on Ian, he joined the military and went to where the action was - the Clan Wars. At first he was only there for the excitement, but he soon matured into a fine soldier; he began to make something of himself, and to accomplish on both a personal and a larger scale.[1]

After the murder of Duke Eric Dresari in late 3062 at the hands of Lord Marcus Roland, Ian returned to his homeworld and staged a guerrilla war alongside his sister Joanna against the Steiner Loyalist forces to regain control of Kentares.

After defeating his treacherous cousin William and driving the Steiner forces off world, Ian was pronounced Duke of Kentares.

There is an alternate ending in which Ian does not abandon his sister and instead saves her. Once the Steiner forces have been defeated, Ian gives rule of Kentares to his sister and leaves with his forces to join the fight against Katrina Steiner off world.

Shortly after Ian was confirmed as Duke, House Steiner used propaganda broadcasts and deviously planned attacks to make it appear that Duke Ian was responsible for the destruction of the planet's cities, killed numerous innocent civilians, disbanded the Kentares Senate in revenge for two of their Senators turning against him, suspended civil liberties by declaring planetwide martial law and even claimed that Duke Ian had turned his back on the Davions and was cooperating with the Lyrans. As a result, most of the people of Kentares rebelled against their Duke and labelled him a tyrant, little different from his Loyalist predecessors.

House Steiner ordered one of their mercenary liaisons, Major Clarissa Dupree, to hire the Black Knight Legion to kill Dresari and his closest supporters and take back the planet for "Archon Katrina". The Legion succeeded in their mission on Kentares, believing they had killed Duke Ian.

It turned out that the Black Knight Legion had failed to kill Duke Ian, as he was still alive in January 3065, nearly two years after his "death".

During the FedCom Civil War, Duke James Sandoval of the Federated Commonwealth's Draconis March (where Kentares IV is located) attempted an unauthorized invasion of the Draconis Combine, his family's longtime enemy. When this invasion failed, generals of the Draconis Combine Mustered Soldiery organized a counterattack against Duke Sandoval and his Draconis March. One of the planets chosen as a reprisal target was Kentares IV, long considered a grievous stain upon the honor of the Combine.

The Third Benjamin Regulars were assigned to erase that stain of honor by capturing Kentares for the Combine. On January 23, 3065, the Regulars landed on Kentares and immediately engaged Duke Ian and his Kentares DMM in battle. Although Ian and the DMM were determined to hold off the Regulars, the DMM was heavily outnumbered and outgunned.

Salvation for Duke Ian and the DMM came in the form of the pro-Victor Tenth Lyran Guards, who were enroute to the planet Tikonov to assist Prince Victor, but were forced to make an unscheduled stop in the Kentares system due to the sabotage of their JumpShips. Marshal James McFarland, commander of the Tenth, decided to assist the beleaguered Duke Ian. A week later, the surviving Third Benjamin Regulars were forced to surrender and were imprisoned on Kentares.[2]