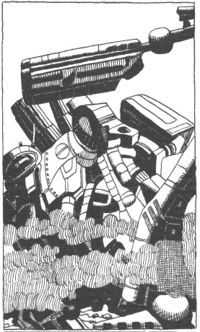 Durant Carlyle's death at the helm of his Phoenix Hawk

Carlyle's Commandos (formerly Colby's Commandos) were a mercenary unit consisting of two BattleMech lances plus several platoons of infantry, led by Captain Durant Carlyle. By 3024 the unit was garrisoning the planet Trellwan, where a 'Mech lance of local Lyran regulars accepted Carlyle as their CO, effectively bringing the unit's strength to a full 'Mech company (three lances).[1]

After the unit's effective destruction in 3024, many survivors joined the Trellwan Lancers under the command of Durant Carlyle's son Grayson. The Trellwan Lancers in turn formed the nucleus of what would become the famous Gray Death Legion.

Sometime around 3015 the Commandos were present for the Battle of Dahlgren where they were forced to retreat off world when a Sword of Light unit dropped in their rear.[4][5]

Carlyle's Commandos were stationed on garrison duty on the world of Trell I (Trellwan) since 3019[6] in the employ of House Steiner. During their stay on the planet they defended it several times against bandit raids.[6] In 3024 the unit met its end in a sneak attack by Oberon Confederation troops, who pretended to be friendly forces, arriving in the course of an alliance between the Confederation and the Lyran Commonwealth as a replacement garrison, but who in truth worked for Duke Hassid Ricol from the Draconis Combine. Upon arriving at the starport, the DropShip and the BattleMechs and troops it carried launched a surprise attack, killing Durant Carlyle in his 'Mech in the process. Together with the efforts of an indigenous saboteur and the infiltration by enemy commandos Carlyle's Commandos were shattered in short order and the survivors forced to retreat off planet, leaving only Grayson Death Carlyle, Durant's son, behind, for he was believed to be dead.

Unexpectedly showing both leadership capabilities and military genius, young Grayson Carlyle subsequently rallied the local defenders and formed a militia force that could resist the invaders long enough to thwart Ricol's plot and save the planet from occupation by the Combine.

Following the successful fighting on Trellwan he went on to create a mercenary unit, the Gray Death Legion, from his Trellwan Lancers and the remains of Carlyle's Commandos. Later, the Legion would adopt the name "Carlyle's Commandos" for its Recon Lance.[7]

The 'Mech company was led by Captain Durant Carlyle. One lance composed of his Phoenix Hawk, Lieutenant Ernest Hauptman's Shadow Hawk (the number two in the lance), and two Wasps was stationed at the "Castle" on Trellwan.

The unit also had a spacecraft at their disposal, referred to as a "shuttle" at one point. Their remaining troops used this craft to escape from the sneak attack. It is implied that the "shuttle" also accommodated their 'Mechs, and this and the visual description suggests it to be a Leopard-class DropShip. Carlyle's Commandos may not have been the owners of this vessel though, as it displayed the crest of House Steiner.