This article is about the digital BattleTech magazine. For the 1988 BattleTech print anthology, see Shrapnel (anthology).

Shrapnel (subtitle: The Official BattleTech Magazine) is an electronic and Print-on-demand magazine dedicated to the BattleTech franchise, intended as a spiritual successor to both the older BattleTechnology print magazine and the shuttered subscription-based BattleCorps fiction website, among others. It was first announced as a non-exclusive stretch goal during the 2019 Clan Invasion crowdfunding campaign, and the stretch goal was achieved; CGL thereby committed to producing at least four issues of the magazine.

The first issue was released to backers of the crowdfunding campaing on 28 May 2020 through a download link; it was made available to the general public in the following month including a Print-on-demand (PoD) option.

Produced directly by CGL, Shrapnel was explicitly stated to be fully canonical for the BattleTech universe. This is a notable exception from the current definition of canon for BattleTech, which states that magazines are not counted among the canon sources by default (overridden in this case through explicitly declaring the publication canonical). 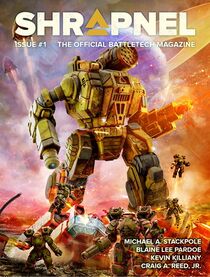 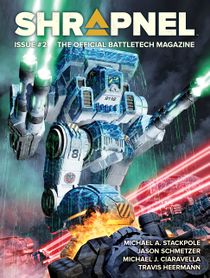 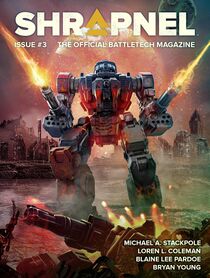