The Draconis Combine responded in force. Warlord Grieg Samsonov (on direct, albeit unofficial orders from the Coordinator himself) cruelly sent none other than the unlucky Minobu Tetsuhara, who was promoted to General for just this purpose, to Misery with explicit orders to destroy Wolf's Dragoons. For this mission Tetsuhara received command of the Ryuken regiments, augmented by several other line regiments. Additional regiments under Samsonov's direct orders were stationed on DropShips hidden on the far side of the moon with orders to drop behind the enemy lines if and when Tetsuhara managed to draw the entire Dragoon force into battle. Samsonov disliked Tetsuhara with a vengeance and was fully aware that he pitted friend against friend and students against their former teachers.

Torn between friendship and duty, Tetsuhara did his best to carry out his orders. When he noticed that the Dragoons concentrated their BattleMechs in one location but did not deploy conventional or AeroSpace units, he assumed that Wolf wanted a ritual 'Mech battle and felt compelled to comply. In fact, Jaime Wolf knew how to use the Bushido code of honor against him so that the Dragoons could dictate the terms of the engagement. 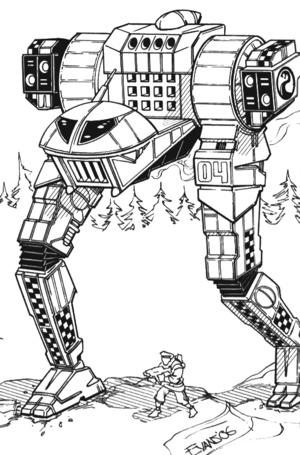 Both armies set up camp far away from each other. However, it was not until midnight some days later (on April 22, 3028) that Wolf's Dragoons finally moved out. Michi Noketsuna, Tetsuhara's aide and friend, reported this to him and observed that they were obviously moving under the cover of the darkness. Tetsuhara could not help but note that there was perhaps another reason: It was just past midnight, and the formal contract between Wolf's Dragoons and the Draconis Combine had now run out.

The two forces met at an ice field where, much to the surprise of the Kurita forces, the Dragoon BattleMechs began to challenge their counterparts to single combat one after another. After a while, a Kurita 'Mech that had just destroyed his Dragoon opponent was suddenly destroyed by renegade fire from the Dragoon lines. Enraged, the Kurita forces charged across the ice field while the Dragoons retreated. Tetsuhara could not stop his troops even when he realized the trap for what it was. Demolition charges broke up the ice and swallowed many Draconis Combine 'Mechs. The Dragoons then turned around to pick off their remaining pursuers who suddenly found themselves on breaking ground. Only the timely arrival of heavy reinforcements allowed the Kurita troops to withdraw.

The losses from this first encounter had already reduced the Draconis Combine's numerical superiority. Worse, it quickly became apparent that Warlord Samsonov had betrayed Tetsuhara and his troops. Twice, Tetsuhara called in his reinforcements when he had the Dragoons ready to be crushed between hammer and anvil. Twice, the reinforcements failed to appear and Tetsuhara barely managed to disengage in good order. In the weeks of vicious fighting that followed, much of the best blood of both Wolf's Dragoons and House Kurita was spilled in the icy wastes of aptly named Misery. While both sides suffered from an equally high rate of attrition from the harsh climate, the Dragoons continually outmaneuvered the Kurita troops and rapidly wore them down. Tetsuhara did not know that the snowstorms only blinded his own units. The Dragoons had deployed recon satellites in orbit and by avoiding AeroSpace combat, had prevented Tetsuhara from noticing them.

The fighting ended when both Minobu Tetsuhara and Michi Noketsuna were captured following the destruction of their 'Mechs, after an attack on the Kurita command post. Tetsuhara had been running from the damaged communication truck to his own BattleMech, a Dragon, when he had suddenly found himself standing before Jaime Wolf's blue-and-gold Archer. Wolf did not kill him, and the appearance of Kurita reinforcements led by Michi Noketsuna in his red Ostroc 'Mech drove the attackers away for the moment. With his command post destroyed, Tetsuhara tried to regroup his forces, who were hopelessly scattered in the snowstorm, but his makeshift command lance was soon brought to battle and destroyed by a Dragoon lance led by Dechan Fraser.

In the aftermath of the Misery debacle, Tetsuhara saw no other way than to commit seppuku for having failed to carry out his orders to destroy the Dragoons. Jaime Wolf desperately tried to dissuade his friend, explaining how he had been betrayed by his own superiors. Tetsuhara remained adamant, however. In Tetsuhara's mind, his rescue of Wolf in 3023 made him responsible for Wolf's life -- and therefore responsible for the destruction on both sides. He nevertheless asked Wolf to fulfill a certain role in the ceremony. Only after Wolf had accepted this request he learned that his role would be to kill Tetsuhara before he could show a sign of pain. Although at first shocked, Wolf did as he was asked and shot Tetsuhara with a laser pistol at the conclusion of the ceremony as a last gesture of mutual respect and friendship, in the presence of Natasha Kerensky and all Dragoon battalion commanders who had assembled to show their respect. Although many were dismayed, similar rituals were not at all alien to those among them who were original Clansmen.