The Ostroc is a heavy 'Mech, weighing in at the lower end of its weight class, originally designed to act as an urban combatant during the Age of War. The best-known of Ostmann Industries' Ost Class of 'Mechs, the Ostroc debuted in 2511 and proved so successful in this role production continued for approximately 200 years. Its unique walker/pod profile, later seen in the Stalker and Marauder, combined with a low silhouette similar to the UrbanMech makes the Ostroc difficult to spot in an urban environment. Fast for its size, well-armored and boasting good medium- and short-range firepower, the Ostroc was also capable when fighting outside a cityscape, particularly as a heavy scout/raider.[1][5]

While a quality 'Mech, the low production capacity of Ostmann Industries made the Ostroc a rarity; indeed the company licensed their other Ost 'Mechs out to Kong Interstellar just to maintain their rate of production, and the majority of those produced were assigned garrison duties within the Terran Hegemony. Still, the 'Mech saw action in every major conflict of the Star League, especially towards the end in the civil war and subsequent First Succession War. The destruction of Ostmann Industries meant an end to any new Ostrocs, although all sides of the Succession Wars continued to field these 'Mechs in combat, particularly the Draconis Combine. It was because of the small number and wide dispersal of surviving Ostrocs that the design was largely passed over while others were being updated after the Helm Memory Core discovery.[1][5][6]

A major revitalization of the design took place within the Capellan Confederation after the Clan Invasion. Having largely rebuilt their forces after the previous decades' setbacks, the Strategios wanted to update the ancient 'Mech, but rather than reverse engineering the original they ordered all Capellan 'Mech manufacturers to submit bids for a replacement. Ceres Metals was the only one to send in a proposal which matched exactly what they wanted and won the contract, completing the first production run in January 3067. Versions of these new Ostrocs also started showing up in the Taurian Concordat and Circinus Federation, a result of espionage according to Capellan charges.[7]

The Ostroc carries as its primary weapons two Fuersturm-C Large Lasers in the left and right torsos. These give the Ostroc good medium to long range damage capabilities. The Ostroc's secondary weapons are two Fuersturm-b medium lasers also mounted in the side torsos and a Totschlagen SRM-4 launcher in the right torso for close-range combat, with one ton of reloads carried in the center torso. While the Ostroc's laser-heavy weapons payload allows it to operate well as a guerrilla fighter since it has limited dependency on supply lines, its short arms are a handicap in close combat, and the shocks of hand-to-hand fighting can easily damage the Fuersturm systems. The nineteen-ton Vlar 300 fusion engine propels the Ostroc to a cruising speed of 86.4 km/h, fast for its size, while fifteen heat sinks provide adequate heat management. Although nine tons of armor provide good protection for the 'Mech, very little is used to protect the arms, meaning the loss of one or both in battle is likely.[1][5][8]

The Ostroc has the following Design Quirk:[37]

The standard configuration with hands and a launcher in the right torso was used for the miniature (see left), depicted in Technical Readout: 3050 and also used in various artwork such as the McCarron's Armored Cavalry scenario pack which depicts three Ostrocs with hands and a shoulder-mounted SRM launcher on the cover.

Earlier sources presenting this design, namely the CityTech rulebook and the Technical Readout: 3025, pictured the Ostroc with two flat, paddle-like devices (presumably SRM-4 launchers) for "hands" on both arms instead of the torso-mounted launcher. Although associated with the 'Mech, this is in fact a common but nevertheless nonstandard variant employing spare parts that were originally meant for another 'Mech, the rare Ostwar (which does feature SRM-4 launchers instead of hands); the Ostwar was a precursor of the Ostroc and many of their components were interchangeable. 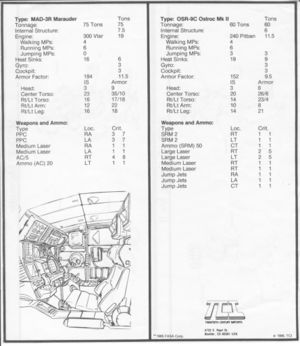 The canonicity of the Ostroc Mk II was a particularly complicated issue, prior to Recognition Guide: ilClan, vol. 21. The design's first and only mention to that point was a model kit set from Twentieth Century Imports (TCI) that included game stat sheets for the classic MAD-3R Marauder and the OSR-9C Ostroc Mk II (Set 7). The stat sheet shows both a FASA and a TCI trademark from 1985 and 1986, respectively; it remains unclear if it can thus be regarded as a FASA publication.
Advertisements for the model kit set were printed in the BattleTechnology magazine, which itself was considered canon in its time (but is now considered apocryphal). Its initial design in these older sources included the SRM-2's in the torsos, where the newer version of the design moves the missiles to the arms, in a style similar to the Ostwar.