The First Succession War was a conflict of unparalleled brutality and horror that raged across the Inner Sphere from 2786 until 2821. At the beginning of the conflict, humanity was at the apex of its technical achievements. At the cessation of hostilities in 2821, the Inner Sphere was slipping rapidly into a technological abyss.

Beginning of the War[edit]

Following the Exodus of General Aleksandr Kerensky and four-fifths of the Star League Defense Forces in November of 2784, the Successor Lords braced for war. They had been building up their household forces since the regency of First Lord Richard Cameron (2751-2762). Once Kerensky and the Star League forces had withdrawn from the Inner Sphere, the Successor Lords were quick to come to blows. In December, 2786, Minoru Kurita, Coordinator of the Draconis Combine, declared himself the new First Lord of the Star League. The other House leaders quickly followed suit and within months the Inner Sphere was plunged into conflict. 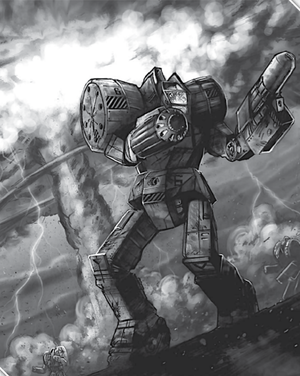 The war lasted thirty-four years and was a horrific and brutal affair. The Ares Conventions went largely ignored during the conflict and billions of civilians lost their lives. The Successor Lords used every means at their disposal to assail their enemies, including biological, chemical, and nuclear weapons. By 2788, the war had regressed primarily to quick raids behind enemy lines to cripple industrial or technical targets. Some forces, in particular those of the Lyran Commonwealth, were ill-equipped to carry out these kinds of attacks and paid heavy prices.

Hardest hit were planets that relied upon water purification technology to make them habitable. Many of these facilities became military targets and residents of these planets needed to import water or locate elsewhere. Unfortunately for many, trade was seriously disrupted during this period and water ships were few and far between. By the end of the war, water-rich planets were as valuable as they had been at the beginning of humanity's expansion to the stars.

In the midst of an advance toward New Avalon, capital of the Federated Suns, Coordinator Minoru Kurita was assassinated by a sniper's laser rifle on Kentares IV. Minoru's son, Jinjiro Kurita learned about the assassination and told his military officers to, "kill them all". When one of them asked for a clarification of the order, the man was shot by Jinjiro's personal bodyguards. The Draconis military forces systematically executed nearly the entire population of Kentares IV in a brutal five-month campaign. Only a month into the operation, however, discipline began to break down and many Combine soldiers committed suicide as a result of the atrocities. Of the executions that Jinjiro personally watched, he forbade using modern weapons, instead preferring a sword to behead the captives. By the end of the operation, nearly ninety percent of the Kentares population was massacred, amounting to almost 52 million men, women, and children.

The ComStar representative on Kentares, in violation of organizational procedures, leaked information about the atrocity to the rest of the Inner Sphere. Millions were appalled by the brutality of the action, none more so than residents of the Federated Suns. Within the Combine itself, however, many were equally appalled, if less able to express it. When they learned of it, the Eridani Light Horse mercenary unit immediately decided to leave the Combine's employ. The governor of Sendai learned of the unit's plans and took, as hostages, the dependents of the Light Horse to force the unit's surrender. When the Light Horse failed to do so, the governor had the hostages executed. Two battalions of the Eridani Light Horse landed on Sendai and exacted vengeance upon the military forces and political officials. Once they completed their mission, the mercenary unit traveled to the Free Worlds League.

The shock and horror of the atrocities spurred Davion forces to launch spontaneous but surprisingly successful assaults against Combine forces. Jinjiro, once one of the most brilliant tacticians and strategists in the Combine, had suffered a psychotic break that prevented him from addressing the Davion advances. By 2798, the Combine forces had been driven from the area around New Avalon. Many of the early gains by the Combine were lost in this emotion-fueled counteroffensive. 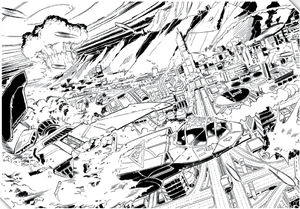 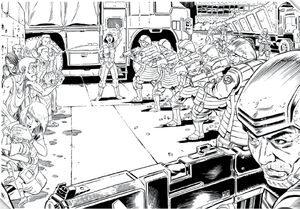 The war ended more from exhaustion than any significant peace deals. The Lyran Commonwealth and the Free Worlds League signed the Peace Accord of Bella I, ending the conflict between the two houses, but it was announced without the pomp or flourish typically expected. Other peace deals, including an offer by Ilsa Liao, Chancellor of the Capellan Confederation, were rejected or not even proffered. The Federated Suns could never agree to a deal with the Draconis Combine after the atrocity of Kentares IV, but feared invading traditional Kurita space. Once they had reclaimed most of their initial losses, the Davion high command decided to stop. The other fronts simply ground to a halt.

Each of the houses had depleted its resources in fighting the conflict and needed time to recover before launching additional attacks. Some gained resources, others lost, but all lost technology and scientific reserves. Industrial output had slowed significantly and trade was almost nonexistent.

While the Confederation gained handsomely at the beginning of the war, particularly toward Terra, it later lost large swaths of territory in thrusts from the Federated Suns and the Free Worlds League. The first Capellan attacks were aided by the capture of some Free Worlds League code books, which allowed the Capellans the element of surprise. As the war dragged on, however, the Capellan forces failed to capture more code books and the Marik forces were better prepared. While the front with the Federated Suns solidified slightly, the border with the Free Worlds League was dismantled by the superior Marik forces.

In 2808, the Chancellor of the Capellan Confederation, Ilsa Liao, renounced her predecessor's claim as First Lordship and offered her support for Prince Paul Davion's claim if the Federated Suns would cede the Chesterton region to the Confederation in perpetuity. Paul Davion instead ordered two units to seize the Capellan worlds of Ulan Batar and Farwell. Why the Prince took this action is still a matter of speculation, but his refusal delayed peace between the two houses for another thirteen years.

The Draconis Combine claimed victory at the end of the war, primarily because they had gained territory. In all, the Combine claimed nineteen worlds from the Lyran Commonwealth and six from the Federated Suns. However, it had lost sixty percent of its manufacturing capacity in the Dieron military district. Coordinator Jinjiro Kurita was less than pleased with the performance of the military, however, and demoted many of those who had failed in their duties. Politicians were also removed from their posts and despite the temptation he felt, Jinjiro only executed a handful of officers and politicians.

Like the other houses, the Federated Suns lost much of its shipbuilding capacity. Much of its industrial capacity had been lost due to damage to water purification plants. Estimates placed the number of casualties at over one billion, mostly civilian. This number included only direct war casualties, not those who died as a result of famine, disease, or other causes.

The League made substantial gains in the war, mostly at the expense of the Capellan Confederation. Following Kerensky's departure, the Star League technology-rich worlds surrounding Terra became a primary target for the Mariks. As part of that thrust, Confederation worlds were seized in the process. It was joked that because of the success of the League's forces that the Marik at the time (Kenyon Marik) would throw darts at a wall map of the Inner Sphere to select his next targets.

The League did suffer the same technological and scientific disruptions that affected the other houses, but to a lesser degree.

The Commonwealth paid a heavy price during the war, losing important worlds like Nox, Juniper, and Alula Australis mostly along the border to the Draconis Combine. However, it gained several planets from the Free Worlds League and the Terran Hegemony as well as many worlds from the former Rim Worlds Republic. Like all other Successor States, the Commonwealth suffered severe military losses. It lost twelve full regiments of the Lyran Commonwealth Armed Forces, including the 54th Lyran Guards and the Tamar Tigers, and most of the remaining 110 regiments had suffered heavy losses. In fact, only three regiments could muster more than sixty percent of their prewar force. Like a reflection of the other Successor States, the Commonwealth's navy had been almost completely destroyed. Only the LCS Invincible remained as a major Lyran WarShip.

The period following the end of the major operations was uneasy at best. Leaders quickly recognized the need to protect their remaining scientific and technological assets. One notable military event taking place during this lull was a series of attacks on the Draconis Combine by the mysterious Minnesota Tribe in 2825. The calm only lasted for nine years before the Inner Sphere was once again engulfed in conflict — the Second Succession War.