This article is about the historical conflict. For the game sourcebook, see Second Succession War (sourcebook).

The Second Succession War began in 2830 and lasted until 2864. It saw a significant reduction in technological advancement as the Successor Lords sought to cripple their enemies' ability to wage war. Instead, only a handful of planets changed hands and the interstellar civilization of the Inner Sphere had for the most part slipped to a level comparable in technological development to early 21st century Terra at its conclusion.

Having built the religious transformation of ComStar around the prophecy of its rise to power after the Great Houses had destroyed themselves, Primus Conrad Toyama was increasingly dismayed by the relative peace. First using the ComStar News Bureau to sensationalize the damage of the minor raids that occurred such as the Chain Gang Missions, Toyama realized that he would have to more overtly force the matter, proposing Operation DIVINE INTERVENTION to the Order's ruling First Circuit in early 2827.[1]. In contrast, Comstar notably went out of their way to suppress the news of the Minnesota Tribe's attacks on the Draconis Combine, not wanting this story perpetuated at all.

At Toyama's direction, ROM began to filter information with regards the inner workings, composition and movements of both the Draconis Combine Mustered Soldiery and the Internal Security Force to agents of LIC, the Lyran Commonwealth's intelligence agency, while the ComStar News Bureau played up the extent of the raids and tension along the Free Worlds League and Lyran border. With the LCAF consistently outmaneuvering the Combine thanks to the leaked information, by 2830 an enraged Coordinator Jinjiro Kurita launched an all-out offensive against both Commonwealth and the Federated Suns to restore the honor of his troops, marking the formal start of the Second Succession War.[1] 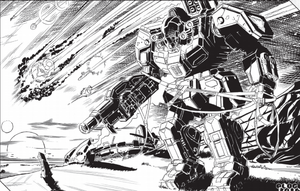 The First Succession War had been exceedingly brutal and horrific and the Second was no different. Hundreds of millions of civilians were slaughtered and technological and scientific facilities were again targeted by military forces. As more and more scientists and technicians were killed, several areas of advancements had begun to slip away almost entirely. As the war raged on, each house lost more and more of its capacity to wage war and make technological improvements.

Part of Conrad Toyama's Operation Divine Intervention, ComStar Adept Jeanette Marik leaked military intelligence to her brother Captain-General Charles Marik which allowed the Free Worlds League to win a number of notable victories against the Lyrans and Capellans but was also designed to escalate the conflict and eventually cripple House Marik.[2]

After receiving evidence of ComStar's double game, in 2837 Charles ordered the last active FWLM WarShips to obliterate the Class A HPG station and all ComStar personnel on Oriente, including his sister. Primus Toyama responded with the Exclusion of the Free Worlds League, ordering the shutdown of all HPG stations in that realm and sending their personnel into hiding until the Captain-General agreed to accept blame and pay for the reconstruction of the Oriente facility.[2]

As the League and ComStar's covert divisions fought a shadow war, the four other Successor States took advantage of the interdiction and launched offensives against the hamstrung nation, the League being pushed to the breaking point. Charles resisted for almost two years, but as his internal enemies wore down his support and large swathes of League worlds were captured, he eventually sent his son under the white flag of truce to Terra in late 2838.[2]

With the cruel and sadistic Archon Claudius Steiner focused on blood sports and eliminating his internal opponents, the LCAF's offensive and defensive operations suffered greatly, most notably leading to the destruction of the elite Fourth Royal Guards in 2849, after a bitter seven-year defense of Caledonia. Claudius finally became interested in the Fourth after Hugai Kurita, son of then Coordinator Yoguchi Kurita, sent him video footage of him tricking the co-commanders and brothers of the Fourth into killing the other in a 'Mech-on-'Mech duel.

Enraged by Hugai's insult as much as the loss of an elite regiment, Claudius issued orders to Snow Fire, a female deep-cover LIC agent serving as a geisha on the Kurita capital of Luthien to earn the affection of Coordinator Yoguchi and assassinate him. Steadily raising her standing to become his preferred concubine, on Yoguchi's first night back on Luthien after his escape from Tishomingo Snow Fire quietly slit his throat with a plasticene knife, placing a hand embroidered version of the Fourth Royal Guards unit patch on his body before taking her own life.

Later becoming known as the sixth, seventh and eighth battle of Hesperus, the epic five-month conflict saw the LCAF successfully repulse the attack thanks only to the desperate use of the LCS Invincible, the Commonwealth's last WarShip, at the literal last minute. While the facilities themselves suffered only minor damage, both sides lost considerable matériel and personnel, including the last Lyran and Combine WarShips. 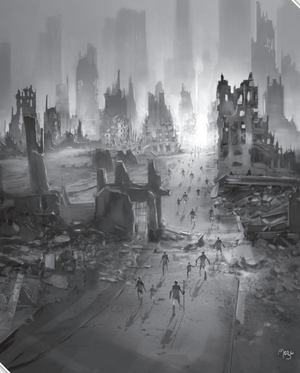 While the renewed war continued to push back the Inner Sphere's general level of technology year by year, the decline was not fast enough for new Primus of ComStar Raymond Karpov. In 2838 Karpov directed ROM to draw up plans to systematically eliminate the best scientific minds in the Inner Sphere, as well as infiltrating and crippling the Great Houses' efforts to recover SLDF supply and military caches, all of which he viewed as deadly threats to ComStar's future. [3]

By the time Holy Shroud drew to a close in 2843, ROM had systematically eliminated over 300 of the best scientific minds in the Inner Sphere. As each Great House suspected that the seemingly accidental deaths and destruction affecting their efforts to recover and maintain advanced technology could only be intentional covert attacks, the skill of ROM's agents in covering their tracks and ComStar's professed neutrality ensured that each House blamed the other instead of the Order. [3]

Running from 2860 to 2862, WINTER GARDEN was the last major offense along the Davion-Liao front during the Second Succession War. While House Davion were ultimately able to capture sixteen Liao worlds, the Capellan's JADE CASTLE defensive plan made the operation far more costly than anticipated with the Capellan people putting up more fanatical resistance and CCAF faster to respond to the Davion attacks than expected. WINTER GARDEN's most notable event was the Melissa Davion-led Davion Assault Guards raid against St. Ives in 2861 that almost succeeded in killing Chancellor Dainmar Liao, the terrified Chancellor desperately suing for peace, ending the Second Succession War between both realms and recognizing Federated Suns authority over the worlds it had captured from the Confederation during the First and Second Succession Wars.[4]

Thanks to the brutal nature of the conflict and the efforts of ComStar's Holy Shroud, by the end of the Second Succession War in 2863, the level of technological knowledge in the Inner Sphere had slipped drastically from its high point at the end of the Star League era around 2750. Several areas of knowledge and technological understanding had been lost, including vital technologies such as how to construct hyperpulse generators and the faster-than-light (FTL) Kearny-Fuchida Jump Drives used in JumpShips. The Great Houses' military forces were forced to cannibalize parts to effect repairs, rather than being able to manufacture replacements. People of the Inner Sphere knew how to use the technology, but they no longer understood how it functioned, nor could they replicate its creation or manufacture. The technology was more akin to magic than science for most people. Only three years later, in 2867, the Inner Sphere would once again erupt in conflict - the low-intensity Third Succession War.