History of the Republic of the Sphere 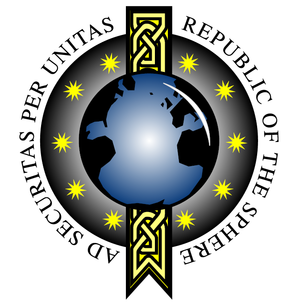 Crest of The Republic of the Sphere

The Republic of the Sphere was born from the ashes of the Word of Blake Protectorate; negotiations between the leaders of all of the major powers from the Inner Sphere and Periphery (with the notable exception of the Capellan Confederation and the Magistracy of Canopus) gathered on Terra alongside the leaders of the allied coalition forces in December 3080 to discuss the formation of a new buffer state between the various Inner Sphere powers from the remains of the Protectorate. The various leaders left Terra on the 20th of December having reached a basic agreement that ceded the remains of the Protectorate to a new realm, the Republic of the Sphere, although it would be several months and much negotiation later before the Republic was finally incorporated.[1] Prior to the Geneva Summit on Terra it was widely speculated that the proposed new nation would be named the "Terran Republic". It was noted that a number of nations supported the creation of the Republic while requesting only modest concessions to themselves, particularly the Federated Suns and the Lyran Alliance.[2]

Among the basic conditions for the creation of the Republic were concessions that returned a number of worlds to the nations that had controlled them prior to the Jihad; it was these concessions that saw the Federated Suns regain control of the worlds in the Kittery Prefecture, while Hesperus II and Solaris VII rejoined the Lyran Alliance.[2] The first state to cede additional worlds beyond the borders of the former Blakist Protectorate to the Republic was the Federated Suns; the Princess-Regent, Yvonne Steiner-Davion, announced on the 12th of January 3081 that several worlds would be passed to the Republic to create an additional buffer zone. This was the first of several deals that would see former Draconis Combine, Free Worlds League, and Lyran Alliance worlds added to the Republic.[1]

After the fall of the HPG grid in 3132, the Republic was torn apart by warring factions within the government who supported neighboring nations including the Draconis Combine, Federated Suns, and Lyran Commonwealth. The chaos caused by the blackout also led others like Clan Jade Falcon, the Oriente Protectorate, and the Capellan Confederation to believe that the fragmented, stumbling Republic made an easy target, so they invaded. Some of the rebellious factions joined with others like them and even Republic loyalists to turn back the tide of invasions, while others joined with the interlopers.[1]

The Republic's internal troubles were far from over, however. The Senate tried to achieve a coup over the ruling Paladins through subversion. Led by Senator Geoffrey Mallowes of Skye, the Senate sponsored promising military officers. The plan was for these officers to be successful in becoming knights and even paladins, then, remembering who initially supported them, return some measure of power to the Senators. This plot was uncovered by Paladin Victor Steiner-Davion, who paid for the discovery of that knowledge with his life. Despite his death, the other paladins were able to piece together enough of the plot to realize what was going on. In response, newly-elected Exarch Jonah Levin dissolved the Senate, touching off a civil war. Senate loyalists fought on Terra, but were ultimately driven off, thanks in part to the Republic's new ally, the Federated Suns. Individual Senators retreated to their homeworlds, but most found that they lacked the support needed to build the kind of coalition they desired, which was only complicated by some Senators siding with the Exarch and others siding with foreign powers. This would result in a number of worlds forming their own small nation known as the Senatorial Alliance.[5]

During the conflicting 3135, there was a huge recruitment drive for Republic forces back in Prefecture X, that were not going back to the front lines. Some RAF soldiers on the field saw that these did not end with reinforcements starting kicking these upstarts out of Republic space, nor where the new factories upgrading production sending these machines to the front line forces.[6] Unbeknown to them, this was part of the preparations of Fortress Republic process.

Most of the RAF forces outside the Wall got the announcement around the 14th of October 3135. There are basically three reactions to this. Some people are going to go home first chance they get. Others are going to go mercenary, figuring they don't have a country anymore so they probably don't have a paycheck. Other, like Evan Kaiple will stay. Though some circumstances have changed, the big picture hasn't. There's still a Republic and it still has enemies. So they'll fight them.[7]

Due to all of the turmoil, many of the Knights and much of Armed Forces of the Republic retreated back to Prefecture X under the plan code named "Fortress Republic". Under the name Fortress Republic, the Republic government would wall off the rest of the Inner Sphere by using unspecified technology hidden away at the close of the Jihad. This effectively stopped movement of JumpShips into Prefecture X. Exarch Levin dissolved the Republic and claimed a newly declared region of space encompassing only slightly more than Prefecture X. This area of space severed all ties with all worlds outside of the territory, even with other worlds of the Republic. Levin stated that he would use all the forces at his disposal to ensure that the newly-drawn boundary remained inviolate. The Republic dissolved as a major political body after the Fortress declaration and was renamed the Republic Territories.

While behind the Walls of the Republic, the Republic forces inside would hunt down and destroy remaining splinter factions and Senate Alliance forces cut off behind the Fortress' walls. During the early years of this time, the Republic took in survivors of their armed forces that had successfully retreated behind the Fortress' walls to begin to form new combat units to replace those lost due to the collapse of the outer prefectures of the Republic. Some of these forces would be dispatched to conduct "False Flag" missions outside the Fortress to keep foreign nations busy, while also collecting intelligence on the state of affairs of the Inner Sphere.

Among the first and most notable of these test for the newly formed combat units, would be to hunt down the renegade ComStar's elements that had reformed the ComGuard under the name "Buhl's Blessed Order". Elements of the Republic forces would end up pursuing ComStar forces to their hidden outpost on Epsilon Eridani and destroying them on their last stronghold in 3141.[8]