The Unfinished Book Movement is a spiritual organization, formed in 2956 and located in the Federated Suns, that seeks to combine the wisdom of multiple faiths in one overarching work (referred to as the Unfinished Book), based on the original goal of its founder to promote total peace through collaboration of interfaith religious study.[1] 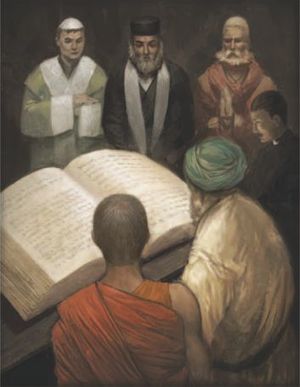 Leaders of the Unfinished Book Movement examine in a circle round

Father Jasper Ovidon of Delphos sought permission from Prince Peter Davion in 2955 to form a council of religious leaders (emulating the example of the Lyran Commonwealth Religious Council), with the intention of developing peaceful communication between the realm's various faiths. The initial request was backed by the New Avalon Catholic Church and members of the Davion nobility. The group was named the Federated Inter-Faith Congress and Father Ovidon was designated the first Chairman Elder the following year.[1][2] 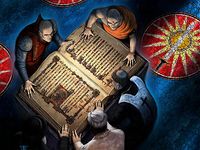 The first project of the congress to be published was the Unfinished Book, a ten-volume collection of scripture from numerous religions, released in 2959.[1][2] It received its name from the concept that spiritual wisdom was extremely vast and therefore the project would take an undetermined amount of time to accumulate it in totality. Father Ovidon held the belief that if the project could be completed, then all of humanity would enjoy peaceful coexistence, either from divine intervention or possibly from the intellectual elevation of mankind.[1]

The first edition of the Unfinished Book became a bestseller within the Federated Suns and resulted in numerous people from all faiths and philosophies volunteering their services to the congress, challenged by the idea of completing the project. Following the death of Ovidon in 2966, the project continued under the leadership of Lama Potec. As of 3028, the movement had become quite large, with a determined following that seemed like a quasi-religious order in structure. Younger members proudly wore a symbol of the movement that depicted an open book set against the Federated Sunburst. The accumulation of the various groups of people involved defied categorization or description, with even religious faith not exhibited as a prerequisite; political views and social classes are as widely represented as the bases of faith.[1] Unfinished Book Movement members were free to take what tenets they desired. Different faith communities had their own organizational structures within the movement, with some overlap.[3]

ComStar exhibited some concern over development of the Unfinished Book Movement, due to the perceived competition in the pool for spiritual-based candidates, indicating that some potential recruits were swayed away from their Terra-based organization. Further apprehension was leveled at the political sway the movement had started demonstrating, with such examples as the appointing of qualified Congressional priests as the official chaplains of the Davion military and published articles written by the Movement questioning the purposes of ComStar, with less than complimentary descriptions. The unease felt by ComStar manifested in protests to the Davion government, though they were reportedly not addressed to their satisfaction.[1]

The Jewish faith was debating joining the Federated Inter-Faith Congress in 3028 (and continued the debate into 3067), due to the reluctance some conservative faithful had over the perceived synthesis of the major religions by the Movement, though the liberal Jews were welcoming of the notion that greater discourse bred understanding.[4][5] Similarly, by 3067, some Christian denominations that had felt God's influence would be destroyed by the efforts of the Movement had combined to form the Christian Faith Council.[6]

The Unfinished Book Movement built its own secular events and holidays. An early example was the Winter Holiday, started in 2957 in honor of the first anniversary of the Inter-Faith Congress. The festival, eventually covering December 17th through 27th, drew from a wide range of wintertime holidays and celebrations, and was revised over time to incorporate additional religions inclusively.[3]