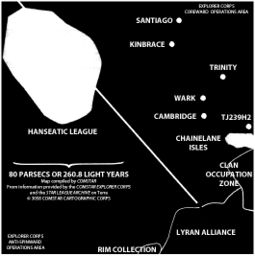 The location of the Hanseatic League

The Hanseatic League was a mercantile nation located in the Deep Periphery, abutting the anti-spinward edge of the Coreward Sector, as defined by ComStar's Explorer Corps. "League territory" extended approximately 300 light years in diameter. With the exception of the Clans, the League was the preeminent commercial and military power within the Deep Periphery. In 3140, they would be defeated and conquered by the Escorpión Imperio and incorporated into the Scorpion Empire.

The modern Hanseatic League was a mercantile alliance of 29 worlds.[1] Lyran refugees arrived in Hansa space in the late twenty-ninth century as a direct result of Archon Elizabeth Steiner's Military Disaster Order. As their influence increased, the League took shape, and was officially founded in 2891.

The League was run by a ruling council of merchants, and wealth was the primary calculus of one's status in society. Though peasants within the League did possess some freedoms, a serf was limited by their lack of affluence. It was not unheard of for a serf to raise in social status, normally a result of a benefactor's kindness.

The mercantile class strictly controlled the flow of goods, services, and travelers within its worlds. The League did trade and interacted with outsiders, but this interaction was "officially" limited to three worlds, Bruges, Lübeck and Bergen. Despite this self-imposed isolation, foreigners were able to do business with merchants on other worlds; the Hanseatic military could not cordon off the entire League. German was the official language, but English and Spanish were also spoken. There was no domestic currency, nor was there an HPG network, so the ruling class controlled all large scale commerce and information.

In 3088 and 3089 Clan Star Adder authorized a long term reconnaissance in force that struck several systems in the Hanseatic League. Most of the Adders' Epsilon and Gamma Galaxies were involved, as was a complete naval Star. Though they returned without two Clusters and a WarShip, they had found several systems outside the League that would make good staging bases.[2] The creation of the Escorpión Imperio also created turmoil in the League, as merchants began engaging in rebellions and other attempts to gain or extend their power.[3]

Beginning in January 3141, during the Dark Age era, the Hanseatic League was invaded and ultimately conquered by Clan Goliath Scorpion and its Escorpión Imperio. Although the Hansa fought stubbornly and valiantly against the Imperio invaders during the grinding fifteen-month campaign and despite having vast numerical superiority, the League succumbed in March 3142 to the combined might of the Goliath Scorpions, Castilians, and Umayyads (with their superior Clan Technology). After the self-destruction of the Council of Merchants on "Red Saturday," October 12, 3141, and the conclusion of the Goliath Scorpions' Hanseatic Crusade in March 3142, the Hanseatic League would be merged with the Escorpión Imperio to create the Scorpion Empire. Thus bolstered by the industrial and commercial might of the former League, Clan Goliath Scorpion cemented itself, its influence, and reputation as an undisputed power in the Deep Periphery.[4]

By Deep Periphery standards (excluding the Clans), the Hanseatic League maintained a relatively large and well-equipped standing army, called the Hanseatic Security Force (HSF), renamed the Hanseatic Defense Force (HDF), which was comprised of nine Regional Defense Forces (RDFs).[5] The League also fielded three Convoy Defense Forces (CDFs), which were formerly called 'Convoy Security Forces.' At first, the League contracted various Deep Periphery mercenary companies, but as both Inner Sphere influence and the Clan threat increased, so too did the flow of matériel and technologies. Before the Hanseatic Crusade, the League's technology level approximately equaled that of the Inner Sphere in 3055.[6]

RDFs possessed conventional combat vehicles and BattleMechs and were used primarily as combined-arms garrisons and pirate hunters. RDFs 1-5 were brigade-sized commands composed of a BattleMech regiment and conventional forces. BattleMechs from RDF 6 (a single reserve regiment) were rapidly deployed to supplement each RDF. BattleMech assets were deployed in company (or companies) of 'Mechs, while conventional forces were fielded as battalions. Before the Hanseatic Crusade however the Hansa never fielded greater than a single battalion of BattleMechs in a single military operation. The League also maintained many mercenary contracts, bolstering the size of their 'Mech assets.

The Convoy Defense Force was the instrument of intimidation used by the Hanseatic League. The CDF was composed of marines, mercantile ships, Aerospace assets, assault DropShips, and "militarized JumpShips". Though the CDF was normally deployed to ensure the security of League trade ships, the CPF has been deployed to rout, cripple or blockade competing interests within the Deep Periphery. The CPF also altered its tactics, and have experimented in deployment as small strike forces.

Each Hanseatic unit was commanded by a Captain-General, a post which was both mercantile and martial in nature. Funding for Hanseatic units was uncertain, but Captain-Generals generally received a percentage (or tithe) of the profits made by merchants operating within their jurisdiction. Effectively Hanseatic units (and their commanding officers) could be "starved" out of existence in response to offenses, but at the danger of leaving Hanseatic territory ungarrisoned.

Spare parts, especially for 'Mechs, were occasionally in short supply, owing to the great displacement between League space and the Inner Sphere. However, the League did possess the industrial capacity to produce some weaponry.

The Hanseatic League claims to support free trade throughout the Deep Periphery, and its traders do venture great distances and trade with many small periphery realms and colonies. However, Hanseatic "free trade" clearly does not extend to member worlds. The Hanseatic League has traditionally expanded its borders through annexation of nearby Deep Periphery neighbors; neighbors with close economic ties to the League have found themselves under the Hanseatic hegemony on several occasions.

Hanseatic interests have led the League to secretly intervene in (and prolong) conflicts between Deep Periphery neighbors (for example, latent intervention in the 200+ year war between the Umayyad Caliphate and Nueva Castile). Ultimately, the League hoped the depleted Castilian and Umayyad armies would be no match for a Hanseatic invasion force, allowing the League to annex the cluster.

Hanseatic League merchants are direct competitors of other Periphery traders, especially those of the Diamond Sharks, and military actions have been taken by both parties. These open hostilities culminated in 3055 with a skirmish near the Chainelane Isles, in which the Hansa lost 2 JumpShips and several DropShips.[7] Since this skirmish, the Hansa has attempted to avoid conflict with the Clans, and merchants have a tendency to direct mercantile interests anti-spinward and rimward (away from the Clan Homeworlds). The Hansa has also made a concerted effort to improve the capabilities of their CPF; it is speculated that another conflict would not necessarily result in "another easy Sharks victory".[8]

Due to the success of Hanseatic trade ventures, the League's free trade worlds are beacons for commerce and information with the Deep Periphery. These worlds are also home to every type of intrigue; agents, traders and warriors of other Deep Periphery realms as well as ComStar, Word of Blake, Clan Watch, Bandit Caste Clan exiles, and several Inner Sphere intelligence agencies can be found on each of these worlds. Indeed, as the consummate capitalists, the League is quite pragmatic and recognizes the benefit of having many "trading" partners. The climate has allowed to Hanseatic League to play all sides with as little spilled blood as possible; information, goods and services are sold to the highest bidder, and with the number of competitors present, it is always a sellers market.

The Hanseatic Leagues sole producer of military goods is located on the planet Antwerp.