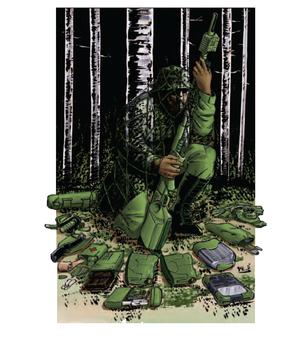 As old as war itself, Infantry are the foot soldiers of any military force. Underestimated and underappreciated in the eyes of their so-called betters, many a campaign is often won or lost due to the actions of the "poor bloody infantry" while BattleMech and aerospace fighter pilots win the glory. Their training, equipment, battlefield role and organization can vary wildly, allowing them to fulfill a number of disparate goals. The ability of even the poorest Periphery state or pirate band to field large formations of infantry ensures their use throughout known space, from the Inner Sphere to the Kerensky Cluster.[1][2][3]

The advent of battle armor has also seen a renewed interest in the use of infantry. Though superior in many ways to their unarmored brethren, their sheer expense and unsuitability for a number of roles sees the continued use of "conventional" infantry.[3]

The cheapest and easiest to maintain, foot infantry are able to cross a wide variety of terrain features, although the lack of any transportation beyond their own legs limits their speed and range of movement. Their most common assignments include static defense, population control, garrison duty and counterinsurgency operations. In addition to their small arms, foot infantry also carry support weapons, though they are limited in how many and what type they may carry.[1][2][3] 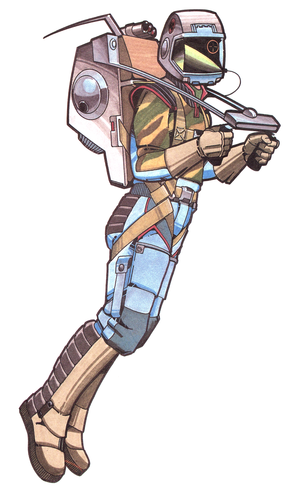 One of the most expensive types of infantry, jump infantry are trained in the use of Jump Packs, bounding across the battlefield in "hops" of up to 100 meters.[3] This allows them to clear terrain more quickly, and gives them superior mobility to other infantry when operating in an urban environment.[1] One of their primary roles is to hunt down enemy 'Mechs, for which they receive specialized training and equipment. Jump infantry sometimes use transports, especially VTOLs.[2] Without transports, jump infantry are limited in the support weapons they can carry.[4]

Infantry in the CBT BattleTech board game are usually heavily abstracted for the sake of simplicity. Weapon ranges are (generally) toned down to a range where the infantry can only fire their weapons at rather short ranges, even if their rated ranges are much further. The Compound Bow for example is capable of shooting to 160 meters in RPG play, but is abstracted to being a melee weapon in the CBT board game (less than 30 meters, or the same hex), the same category as actual melee weapons, including the Sword, katana, or the more combat effective Vibroblade, Vibrosword and Vibrokatana (though actual melee weapons have an additional to-hit modifier, since chasing down and stabbing someone within a 30 x 30 meter area is harder than shooting them with a bow). Laser rifles have an effective RPG range of over one kilometer, but in CBT play, this is reduced to 60 meters for the short range bracket, 120 for medium ranges and 180 for long.[6] This is done to abstract the actual effectiveness of the unit against an armored target, with the entire unit firing at it.

The damage formulas can also lead to some unusually high amounts of damage against armor, even though the troopers are unlikely to actually deal major damage when looked at objectively (a bunch of rifles versus what's effectively diamond plated steel in the case of ferro-fibrous armor ends up sloughing off a ton of the armor in the case of a "perfect" Auto-Rifle "shot" from a normal IS platoon in CBT play). However, some could argue that since a Machine Gun can damage armor in the BattleTech universe, it stands to reason that infantry should as well. Infantry often can deal more damage than a vehicular machine gun however, especially once their support weapons come into play.

Infantry ammunition usually isn't tracked, with the exception of the Field Gun and Field Artillery classes of infantry, which are assumed to have a ton of ammo, such as would be present as a vehicular ammo bin. This can be any type of ammo as well.[7]

Due to the way infantry damage works formulaically, an infantry squad in CBT at minimum will deal one point of damage to all targets, assuming they hit, as long as the weapon can deal "penetrating damage" (which basically means it shoots something intended to kill you). This can imply that a squad with nothing more than an Axe as a weapon can deal what can be considered major damage to a (probably light) 'Mech, even if only a single man remains to carry out the attack.[6] This of course precludes anti-'Mech swarm and leg attack tactics.

Nonlethal weapons (called Non-Penetrating Weapons) can be used, and for CBT play these weapons affect infantry normally in terms of damage, including the fact that the infantry is considered "killed". This is likely due to the fact that needler weapons are categorized in this area as well, instead of their own area. They will not be able to affect armor however.[8] Strangely, even if a platoon is wiped out by nonlethal weaponry, there's still a not insignificant chance that the infantry will end up "dead" when triaged by a medical team. "Normal" weaponry needs a post-battle check of 7 or greater per infantryman to have them survive the damage, regardless of the source. In the event of "nonlethal" weapons, the target roll is 5. If that roll fails, the man is considered to be "dead", even though they took the hit by a nonlethal weapon. Proper, fully staffed medical teams and Paramedics can bring that target number down though.[9]

The best way to take out infantry is usually with another infantry squad, or battle armor, especially if they've dug into hard cover, like a city in which they are defending.

Infantry rolls full damage values when attacking other infantry (not counting cover) using the infantry versus infantry tables. Battle armor with an AP Mount also deals full damage to infantry, and receives damage as though they were 'Mechs with each cluster of damage rolled per suit.

With a few exceptions most vehicular scale weaponry doesn't deal much as much damage to infantry versus a vehicle, and in fact, infantry take significantly reduced damage from most vehicular weaponry. The major exceptions to this rule are the Machine Gun, Small Pulse Laser (and Micro Pulse Laser), the Flamer series and the AP Gauss Rifle (artillery is unwieldy, but counts too). Most other weapons only deal around one tenth the damage they normally would against infantry, and missiles deal half as a result of not being designed to hit multiple targets - though granted an infantryman directly hit by an AC/20 round, or even an LRM warhead probably wouldn't be having a good time.[10]