The ilClan Trial was the final battle between Clans Wolf and Jade Falcon to determine which clan would not only become the ilClan, but to become the First Lord of the reborn Star League on Terra. This would cause both Khans to consider how they should approach the matter to become the contender of being ilKhan. While Alaric took a more liberal, open approach by reaching out to their estranged brethren with the exiled Wolves, Paul Moon's Fidelis and Wolf's Dragoons mercenary unit, while Mavina would take a brutal approach as she always does.

As Devlin Stone was losing his grip on both Terra and the Republic of the Sphere, he would execute Damien Redburn's plan to assassinate both Khans. However this plan backfired when he died as both Wolf and Falcon forces destroyed him and his group.[2] This would make matters worse for Stone as he would be forced to contact Clan Wolf to surrender. Having already angered Alaric by this decision, he insisted that he also contact Malvina Hazen as well to discuss terms of surrender. Stone, realizing that he had no other choice, agreed to do so despite his dismay. When the Exarch met the two leaders in person, He would propose that he would not compete and surrender to both the Wolves and the Jade Falcons. However that was not good enough for both of these Khans, having already gotten on Khan Ward's bad side after the failed assassination attempt, Alaric made his own proposal: to disband the Republic of the Sphere once and for all.[3] Stoned insisted not to do so and even offered himself to the Wolves to make up for the assassination attempt, but Ward would not accept the offer. Stone, realizing he could not talk his way out of this deal decided to make good on his promise and disband the Republic as a result. With Stone and his Republic out of the way, Alaric would now focus on his true goal: The rise of the ilClan.

Alaric would declare one final trial to Malvina Hazen, the trial for ilClanship and to be called the First Lord of the Reborn Star League. This trial would essentially become a Trial of Refusal. Unlike the Refusal War however, both sides would bid everything they had to fight each other. To mark the ceremonious occasion, both Wolf and Jade Falcon members would have their own ceremonial uniforms and traditions to signify its importance. The two sides would agree to fight on the plains of North America as their staging ground.

With the trial beginning, it was now time for Clan Wolf to bring in their allies to finish their final battle on Terra. Alaric would bring his allies of Wolf origins including both Clan Wolf-in-Exile and the Wolf's Dragoons mercenary unit. The Fidelis would also join as part of the deal to Alaric to reconstitute the Jaguars. Both forces would suffer their own heavy losses, but this was to be expected due to how greatly both leaders wanted to become the First Lord of the Star League. While the Dragoons were ordered to pull back and retreat, Anastasia would be the one to make the final blow again the Chinggis Khan Malvina Hazen, ending the battle for Terra.

Both sides would suffer heavy losses from the fight. However the Wolves would end up being the victor after the Jade Falcon Khan was defeated in battle. Each side was tending to their wounds and working on rebuilding their forces. To show his victory with Clan Wolf, Alaric would don a new uniform based on the Star League Army Uniform with a Clan Wolf Insignia on it. This would demonstrate his new ranks of being the First Lord and the ilKhan. As for the Jade Falcon Clan, many of their warriors would end up still wounded from the battle, taking months to recover. As for their leadership, Malvina Hazen would finally meet her end, not from the Wolves themselves; but from the stepdaughter she had abused from the very start. This would be Malvina's true downfall, as the Jade Falcons would be using this time to replace her and redeem their honor that was tainted during her rule.[4] As for the Wolf's Dragoons mercenary unit that fought beside Clan Wolf, it was revealed that they were being manipulated by Alaric himself as a weapon to be used however he saw fit. Adding insult to injury, the new ilKhan had given them 30 pieces of silver while reminding them that, while they were of Clan Wolf origin, they had turned their backs on the Clans during Operation Revival long ago. Angered by this revelation, the Dragoons had declared a vendetta against Alaric and his wolves for what he had done to them.[5]

The last matters that Alaric had tended to were both the resurrection of Clan Smoke Jaguar and filling in the voids of Jade Falcon leadership as well as their fate. To the former, Alaric Ward would visit Paul Moon to keep his word on resurrecting his clan after his people’s participation on Terra. He also saw an opportunity to prove how the Second Star League were indeed a sham. He would instruct Clan Smoke Jaguar to fulfill the roles of both SaKhan and Khan in order to lead the future of the new Smoke Jaguars. After a Trial of Position was held, it was declared that Prohaska Moon, a blood descendant of Paul Moon would take her place as the Khan of the re-formed Jaguars. From this point on the re-formed Clan Smoke Jaguar would become a Clan once again.[6]

With the latter, Stephanie Chistu was nominated as the new Khan of the Jade Falcons due to the honor she displayed on the field in defiance of the fallen Khan Malvina Hazen. Another Jade Falcon Warrior would challenge her out of the respect for the late Hazen and her Mongol Doctrine. After the Trial of Grievance was settled, Stephanie would be chosen as the new Khan and was given Tara Jade Falcon as a way to help redeem the reputation the Jade Falcons that her predecessor tarnished.[7] Also due to the heavy losses, Clan Jade Falcon suffered from both the battle and with Clan Hell's Horses Operation Stampede in retaliation of their manipulation, it was decided that Clan Jade Falcon would become a bodyguard clan for the ilKhan to fulfill a similar role of the Royal Black Watch. This was done out of respect and heritage for both Tara Campbell and the Jade Falcon's founder Elizabeth Hazen's Black Watch origins.[8] 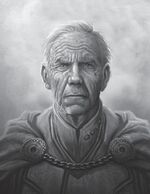 Devlin Stone's death would mark the end of the Dark Age Era.

The ilClan Trial would not only change the political aspects of the Clans, but the personal aspects as well. When it comes to Alaric Ward, he would cause the most significant changes of all. One of the first things that his trial would do is change the landscape of the clan political doctrine. As where the Crusader philosophy was created as a way to take over the Inner Sphere and dominate Terra, it was often derided as a stereotype of why all Clan warriors hate the Inner Sphere by their inhabitants. However, after many generations had passed, the Invading Clans had matured. Alaric had managed to transform the Crusader philosophy into a more peaceful endeavor, possibly due to his own maturity and his genefather being Victor Steiner-Davion. Even when he had the tomb of Aleksandr Kerensky, he grew to understand the reason for why he left the Inner Sphere and why his son, Nicholas created The Clans to return. It was at this moment why he would use the Crusader way as a means to defend the Inner Sphere rather than to act as its conqueror as stereotyped by many spheroids as a basic clanner attitude. Out of the three prominent Crusader Clans: Clan Wolf, Clan Jade Falcon, and Clan Smoke Jaguar are the only three Crusader Clans who have fulfilled the role of what the Crusader movement was about. With Clan Wolf, they were able to reunite with their Warden brethren into a united Clan Wolf once more. As for the Smoke Jaguars, when it came to their near destruction during the Great Refusal, they became a pseudo-Warden Clan, learning from their mistakes of how they had failed the Crusader way, while fighting for the Inner Sphere as a way to redeem themselves as the Fidelis. Last, Clan Jade Falcon, a clan known for their sheer tenacity and honor was tainted from the inside out and turned into a dishonorable Clan that disregarded honor for the sake of brutality and fear under the leadership of Malvina Hazen.

With Clan Wolf as the ilClan, Clan Smoke Jaguar reconstituted as a full Clan once more, and Clan Jade Falcon converted as a bodyguard clan, it is likely that the three Clans have abandoned their Crusader beliefs and animosity for each other in order to protect Terra and the New Star League as well as begin the healing process between the three clans.

The ilClan Trial had succeeded in two objectives: completing the Crusader cause and Aleksandr Kerensky's Hidden Hope Doctrine.