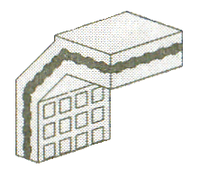 Reactive Armor (sometimes called Blazer Armor) type of specialized armor that uses a series of microscopic explosions to reduce the effects of explosive weapons fire like missiles, artillery, and mortars. When these weapons hit a unit with Reactive Armor protecting the area, the damage is reduced by 50%. The microscopic explosives embedded in the armor redirect the force of the weapon away from the protected unit. This force redirect also reduces the armor-piercing effects of Tandem-Charge Missiles, Armor-Piercing autocannon ammunition, and BattleMech Taser spikes.[1]

Though effective against missiles and artillery, the armor is no more effective than standard armor against other weapon types and physical damage.[1]. In addition there have been several cases where lucky weapon fire has initiated an armor explosion, stripping the Reactive Armor away from the protected location, leaving the unit extremely vulnerable.[1] Another drawback to the armor is its bulk: Reactive Armor occupies as much space on a chassis as standard ferro-fibrous armor, but only provides as much protection as standard 'Mech armor.[2]

The armor was developed by the Draconis Combine in 3063, but Clan Ghost Bear captured several samples during the Combine-Ghost Bear War. The Bear's Scientist caste was able to reverse engineer the armor and put it into limited production two years later.[1]

The armor would be later enter more expansive production by 3081, being reclassified as Advanced Technology.[3] By the thirty-second century would was used on a number of BattleMechs and combat vehicles. The development of Ballistic-Reinforced Armor during the middle thirty-second century would use the Reactive Armor and Hardened Armor as the basis for its combined effectiveness.[4]

Reactive Armor is manufactured on the following planets: