Redjack Ryan (ca. 2988 - ca. 3049; death during early Clan Invasion unconfirmed), MechWarrior and self-styled king of Butte Hold, was one of the Periphery's most brutal and feared pirate kings. 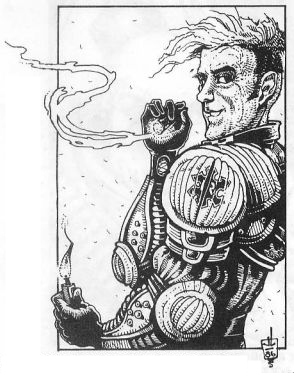 Redjack Ryan in his early years

Ryan was born in the Lyran Commonwealth ca. 2988 as the illegitimate child of a noble descendant of famous Terran Hegemony entrepreneur Rudolph Ryan,[1][2] although his exact birthplace is unknown. He attended a Commonwealth military academy, but was thrown out for doctoring evaluation reports.[2] Subsequently, he made his way to the Oberon Confederation and purchased himself a position as battalion commander.[2]

As a lieutenant in the forces of Hendrik Grimm III of Oberon, Ryan and his battalion of the Oberon Guards were "on loan" as mercenaries to the Lyran Commonwealth in 3017, and were ordered to occupy and garrison the Lysidas continent on the contested agricultural border world of Fianna, which was held by the Free Worlds League at the time. They faced a civil uprising that spun out of control after inexperienced MechWarriors fired on protesters. This was followed by acts of sabotage which in turn led to retribution attacks, escalating the conflict. Ryan and his battalion wrought utter destruction on the planet, sacking entire cities, enslaving the population and destroying many industries including a large fusion power plant. In the end, Ryan's forces occupied a Star League era storehouse with chemical weapons and threatened to use them against the population if they were not provided with a JumpShip to leave the system. Although the government gave in and Ryan got his ship, the last elements of his unit to leave the planet were overrun by an angry mob and the chemical weapons stockpile was released; it was suggested that the damaged power plant may somehow have exacerbated the problem. In any case, half the planet was poisoned and millions were killed while the bulk of Ryan's forces escaped.[3]

Another version of the story claims that Ryan had no interests in life besides murder and rapine, and fled when Hendrik Grimm III wanted to place actual command responsibility on him. Sleeping with King Hendrik's daughter Ella Grimm may also have played a part in Ryan being purged from the Oberon Confederation.[5]

Henceforth known as the Pirates of Butte Hold, Ryan and his troops (calling themselves Ryan's Rebels) indiscriminately raided nearby realms for water, supplies and spare parts. The Lyran Commonwealth and Draconis Combine suffered the most attacks, but the Oberon Confederation was raided as well.[1]

Ryan's depredations and the prospect of booty attracted numerous recruits, and he soon commanded some two battalions of 'Mechs. However, his hold over them was tenuous at best. From approximately 3018 to 3021, Wilson's Hussars, having been betrayed by their previous employer, found refuge on Butte Hold. Their relationship soured after Hussar Lt. Sheila Bannock was killed in a barfight on Butte Hold in 3021; subsequently, the Hussars ended their employment with Ryan and went to work for neighboring pirate king Helmar Valasek on Santander V.[6]

Testimony taken by ComStar in 3020 indicates Ryan was also active as a space pirate during that time.[7]

Shortly after Ryan had parted ways with Hendrik Grimm III his lover, Maria Morgraine, also a lieutenant in the Oberon forces, broke away from the Oberon Confederation as well.[8] She gave birth to Ryan's child in 3018, implying that she was already pregnant when he fled the Oberon Confederation in 3017. Morgraine established her own pirate kingdom, Morgraine's Valkyrate, near the Oberon Confederation, too, but was initially unaware of Ryan's fate or the existence of Butte Hold until 3026. In 3027, Ryan's lieutenant Agnar "Satan's Son" Haggerty, who was secretly spying on Ryan for Hendrik Grimm III and coveted Ryan's position, raided the Valkyrate world of Last Chance in an attempt to incite a war between the pirate bands. Haggerty's force damaged factories and stole an entire year's harvest which led to food shortages and starvation in the Valkyrate.[5]

Redjack Ryan and Maria Morgraine were reunited in 3028, through an attempt by Hendrik Grimm III to play them against each other and have their units wipe each other out in an engineered raid on a Lyran depot on Toland. The plan backfired and the pair joined forces, marrying to merge their previously independent pirate kingdoms into the Greater Valkyrate.[8][5]

They had one legitimate child, Susie Morgraine-Ryan,[8] who was born in 3018 and became commander of the Ryan's Rebels' Third Battalion by 3050. Redjack Ryan was noted to have many illegitimate children, including his son Kenny Ryan.

In 3049 the Kell Hounds were on a pirate-hunting mission against Kenny Ryan's pirates in the Oberon Confederation system of The Rock where they witnessed the arrival of the Clans and their capture of Kenny Ryan. The Clans quickly overran the local pirate realms including the Greater Valkyrate. Maria Morgraine was killed fighting the Clans, buying her daughter time to withdraw with the greater part of her battalion. Susie "One-Eye" Morgraine-Ryan escaped to Star's End.[9]

The exact fate of Redjack Ryan is unknown. He is generally considered to have perished around the year 3049, as his daughter Susie Morgraine-Ryan was said to have been orphaned during the Clan Invasion.[10] The (apocryphal) computer game MechWarrior 2: Mercenaries features the arrival of the Clans during its Sigurd campaign, initially in the form of mysterious "turmoil" in the general region and reports of terrified pirates fleeing into the Inner Sphere, and mentions in a log entry dated 20 September 3049 that Redjack Ryan is rumored to be dead already.

As of 3025, Redjack Ryan was described as tall and lanky, with sandy-blond short-cropped hair and shifting gray eyes.[2] His scarred back was tattooed by 3028.

His personality was described as particularly unsavory, arrogant, self-centered, avaricious, sadistic and savagely cruel. He delighted in rapine and wanton murder and could hold a grudge forever.[2] Testimony taken by ComStar in 3020 indicates sexual abuse of prisoners and that he enjoyed the torture of captives.[7]

Generally, Ryan and his pirates were a hated pest, but no government dared to move against him because of the many hostages he held.[2]

Although "Redjack" Ryan is unlikely to be his actual given name, no other name is known.

To: The Right Honorable Kalvin Mitchel Michalmas III, Admiral Extraordinaire in command of Her Majesty the Archon's Periphery Forces.

I have received your communication of last month in which you state your intention to hunt down, pen up, eradicate, and ultimately destroy myself and my band of fellow privateers. As an aside, sir, I respectfully point out that I prefer to be called a "Corsair". Yes, I rather fancy that. The term "pirate" is such a widely misused and hackneyed term these days.

At any rate, as to your letter, I welcome the opportunity to meet you in deep space, but please do not be too slow in coming to me. You see, sir, I have a special reception already planned for you and yours. If you are not soon in coming, I shall have no alternative but to come looking for you. I have long fancied a visit to Tharkad before I die. Indeed, more than once have I considered the acquisition of a large palace on one of the Archon's smaller estates for use as a memorial brothel in my honor. I much enjoy the thought of leaving behind something of lasting value.

So please come. Bring your fleet and your BattleMechs and your troopers. We are waiting for you. Ah, but do plan to stay a long time...a very long time.

-A letter from Redjack Ryan to a member of the LCAF High Command, published in the Tharkad Universal Tribune, December 11, 3022.[citation needed]