He was the father of martyred aerospace pilot Tyra Miraborg.

Tor Miraborg was born on Gunzburg in Draconis Combine during the twilight years of the thirtieth century.

At the formation of the Free Rasalhague Republic, Miraborg was serving as the executive office of the 1st Tyr. He was best friends with his unit's commanding officer, Christian Månsdottir.

During the Ronin War, as Överste-Löjtnant, he commanded half of the regiment when it was split off to help fight off several Kurita ronin units. Early in this conflict, he was injured twice in combat, suffering only light wounds when witnesses thought he should have been killed.[3][4]

His most noted combat was in September of 3034, when his command lance was caught in ambush by the remains of the 211th 'Mechanized Assault Command. His mercenary support unit, Dragon's Breath sustained heavy damage. They cited a vague clause in their contract so as to withdraw from combat. This left Miraborg's unit without any additional help.

The fighting ended badly, with his 'Mech being last to go down. During his ejection from his Grasshopper, one of the renegade armored unit's Von Luckner's shells clipped his 'Mech's head.

Miraborg woke several hours’ later, in a MASH unit's bed with severe injuries. The enemy fire had given him a great deal of scarring, which left his spinal cord bruised and nearly took his eye. Christian convinced Prince Magnusson to reward him. In turn for his dedication and patriotism, he was reward rank of Valdherre of Gunzburg.

On 28 April 3036[5] Tor was injured in combat again, when his 'Mech received a head hit while fighting remains of the Gotterdammerung Society mercenary command which had been active during the Ronin War few years earlier. This time, his injuries left him unable to walk and bound to a wheelchair. Despite his injuries, Tor kept active in the defense of the country, now having gained the nickname "the Iron Jarl".

He and his friend Månsdottir had different political policies however, despite this he was promoted to General of the Radstadt Province by his old friend's recommendations.[6] 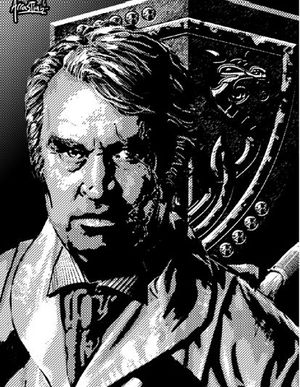 In 3049, Tor's anti-mercenary mentality had infected many among his people, including upcoming soldiers. Many worshipped him, scarring themselves to be just like him.

During this time he had an altercation with Phelan Kell, the son of mercenary Morgan Kell. Kell had been in a romantic relationship with Tor's daughter Tyra for several months. Kell, after being beaten up by fanatical followers of Tor, was brought before him. He then was thrown off the planet, along with rest of his unit to the Periphery. After the altercation with Kell, Tor's daughter Tyra left Gunzburg and this resulted in estranging their relationship.

During the Clan Invasion, Gunzburg was in the Clan Wolf invasion corridor. Star Colonel Natasha Kerensky bid one warrior, Phelan Kell (then known at that time as Phelan Wolf), to take the planet.

Tor met with the masked Phelan Wolf, with his aide Kapten Hanson Kuuisk at his side to assist. Kell told them that they must surrender or their world would be destroyed. Kell pointed out the Clan forces knew about all the planet's defenses and of the surviving forces such as remains of 3rd Drakøn fighter squadrons taking shelter there. Kuuisk accused the Wolf emissary of bluffing about the impending Clan Wolf invasion. The aide then attempted to attack the Wolf emissary, but was easily knocked out. Kell then reminded Tor of his greater responsibility to the people of Gunzburg.

Tor, his heart heavy with the recent loss of his daughter and laden with a sense of responsibility for his planet, ultimately decided to surrender to Kell. He stated he would retire from public life. However, Phelan prevented this. He negotiated with Tor Miraborg, stating though Gunzburg would be officially under Clan Wolf rule, Tor Miraborg must maintain his role as its leader. At the time, Phelan had worn a ceremonial Wolf mask in their meeting, never revealing his true identity. As a result it was Tor himself who unwittingly was the first to inform Kell of his former lover Tyra's death.[7]

After the Clan Wolf–Clan Jade Falcon Refusal War, Clan Wolf-in-Exile returned General Tor back to the Free Rasalhague Republic. There he turned to teaching, becoming an instructor at the Tyra Miraborg Memorial Academy.[8]

In 3064, Gunzburg was liberated by Clan Ghost Bear forces, led by Star Colonel Ragnar. Tor was brought back to Gunzburg. There in the ceremony, Ragnar gave Tor his mirror sunglass that Tor had given to Phelan Ward when he surrendered the planet to Clan Wolf. He and Ragnar witnessed the raising of the both Clan Ghost Bear's flag and old Free Rasalhague Republic flag at planet's capital.

Tor Miraborg was a notable Grasshopper pilot during his active military days.[3][4]