The Clan Occupation Zones are the regions of former Lyran Commonwealth, Free Rasalhague Republic, and Draconis Combine space that are under the control of the Clans following the Clan Invasion. 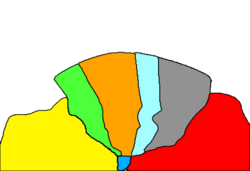 The Clan Occupation Zones as depicted in 3052.

Each COZ's structure and hierarchy differs according to whichever Clan is in control. For example, life in Clan Ghost Bear's Zone resembles that of the Rasalhague Republic, with currency and free trade, while life in the Clan Jade Falcon OZ is structured like life in the Kerensky Cluster, broadly centered around socialist economic thought and traditional Clan values.

The Zones all added together are slightly bigger in planetary assets than the Capellan Confederation, and possess the bulk of the respective invading Clans' forces.

Originally there were Four occupation zones:

But the number of Clans present, and the number of zones, reduced quickly: in 3059, after Operation BULLDOG the Smoke Jaguar Occupation zone was reconquered by the Combine and Nova Cat worlds turned into the Irece Prefecture.[1] In the year 3061, the Steel Vipers were defeated by the Jade Falcons and forced to leave their Occupation zone exclusively to them.[2] After the Great Refusal, Clan Hell's Horses invaded the rear of the Wolf and Falcon zones, creating their own occupation zone. The space of all the zones changed drastically with the time: The Ghost Bear zone expanded greatly, taking worlds from the Horses, Wolves and even the Draconis Combine, after the Combine-Ghost Bear War.[3]

Before the start of Operation Revival, each Clan would fight in a series of trials to determine which Clan would join the invasion. Those who fought well would get a chance to select their own Successor State to attack, while other Clans who showed decent progress where placed as reserve Clans. This organization was done by the Crusader Clans to achieve the promise of the Hidden Hope Doctrine of restoring the Star League. When the dust was settled only three Crusader Clans spearheaded the assault, leaving Clan Wolf as the only Warden Clan forced to participate out of punishment for objecting to the invasion. As each Invader Clan plotted which faction to attack, they would give their own mindsets and reasons about their Clan which would affect how their captees would be treated under their rule.

Clan Ghost Bear would set to attack the Free Rasalhague Republic. The Ghost Bear Clans' mindset was that they wanted to have a positive image upon their captees. Rather than act as conquerors, the Bears would instead act like partners learning the culture of their realm, while at the same time indoctrinating them into the Clan Way. The groundwork set by Ghost Bear SaKhan Theresa DelVillar and capture of Elected Price Ragnar Magnusson would pay off greatly for the Clan. They would claim a large portion of the Free Rasalhague Republic, renaming it into the Ghost Bear Dominion and later on, the Rasalhague Dominion.[4] 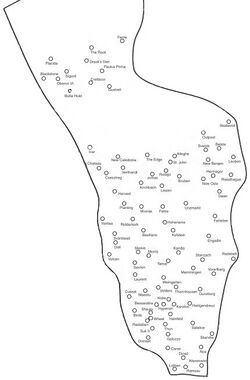 The sole Warden Clan, Clan Wolf would also strike the Free Rasalhague Republic. However, their motives unlike the other Crusader Clans were to protect the inhabitants of the Inner Sphere. They believed that the Inner Sphere inhabitants would be better protected and respected by a Clan who cares about them rather than other Clans who would abuse them and disregard them as barbarians. As such, the Wolves would cooperate with their captees, gaining worlds quicker in the process. This act of goodwill and respect towards its citizens would end after the Refusal War as the reborn Crusader Wolves treated their own people with the same typical mindset of the Crusader Clans. Only the exiled Warden Wolves still maintained these relations with the Inner Sphere after joining the Arc-Royal Defense Cordon.[5]

The traditional-minded Clan Jade Falcon treated their captees with the same attitude as their homeworld counterparts. The Falcons would settle on attacking the Lyran half of the Federated Commonwealth (later renamed as the Lyran Alliance). The Jade Falcons were brutal and quick to put down oppression on any world they conquered. Despite the harsh treatment of their labor caste in the Inner Sphere, they still respect their captees to such an extent, that they gave them a high standard of living. Although they would still impose their traditionalist views upon their captees.

The Pesht District, later gifted to Clan Nova Cat and renamed into the Irece Prefecture.

Out of the most aggressive Clans in Operation Revival, Clan Smoke Jaguar chose to attack the Draconis Combine. Their reasons for doing so was due to the belief that the Combine were worthy foes. In addition, the Jaguars also believed that they were responsible for helping Stefan Amaris destroy the Star League.[6] The Jaguars brought their brutal mentality to not only the soldiers of the DCMS but its citizens as well. They treated civilians poorly akin to the Londerholm Revolt and spurned help from Inner Sphere advisers on how to manage the populace. On top of this, Jaguar warriors abused their captees taking their anger and aggression out on them when they reacted poorly to news like the hearing of Clan Wolf's rapid progress. This would cause the populace to rise up against their oppressors.[7] The Jaguars' most infamous example of their butchery was the massacre of Turtle Bay after they failed to recapture Theodore Kurita's son, Hohiro Kurita.[8] The Jaguars would pay for their harsh rule and brutality in the form of the Second Star League. As a consequence of the Smoke Jaguars' brutal nature, they would lose all of their holdings in the Inner Sphere and get annihilated during the Great Refusal.[9]

In 3057 after the Refusal War, Clan Wolf and Clan Jade Falcon would announce that any Clan warrior who wished to fight in the Inner Sphere would have to do so under the banner of either Clans. This would be known as the Harvest Trials, as it would quickly replenish the strength of both Wolves and Jade Falcons.[10] Although most Clans gave away their Crusader-minded units, Horse Khan Malavai Fletcher would instead see this as an opportunity to join the Inner Sphere. He would propose a deal to Wolf Khan Ward to donate his unit to the Wolf Touman in exchange for the Horses keeping their loyalty. Khan Ward agreed and gifted three worlds to the Horses as a part of their occupation zone. While the Horses would be beaten out of the Inner Sphere by the Ghost Bears, they would return in 3071 under the "alliance" with Clan Ice Hellion.[11] Following the Jihad, the Hell's Horses would claim worlds from Clan Wolf in retaliation for their manipulation.

In the 3060s Clan Snow Raven would finally depart from the Clan Homeworlds. They would later enter a war with the Draconis Combine after they lost a ship from their forces. The Ravens would later seek refuge with the Outworlds Alliance and reside with them after fruitful relations.

Although the Invading Clans enjoyed the tremendous wealth they gained from the aftermath of Operation REVIVAL, their luck would eventually run out during the late 3060s. After the dissolution of the Second Star League and expiration of the Truce of Tukayyid, ilKhan Brett Andrews would direct his attention to the Invading Clans, claiming in order to restart another invasion, they must purge the Inner Sphere taint within their Clan.[12] This would result in a brutal civil war between the Invading Clans (including those who briefly visited the Inner Sphere) and Home Clans. As a result, communications were severed between the two realms permanently.[13] Some Clans, such as the Ice Hellions and Hell's Horses did attempt to carve their own occupation zone, leaving the former to become scattered among the Inner Sphere.[14][15] Clan Diamond Shark would be the first Clan to depart to the Inner Sphere during the civil war, followed by the other spheroid Clans. Their holdings in Clan space were fought over by the other Clans. This would leave Clan Diamond Shark, Clan Snow Raven and Clan Hell's Horses as the only three Clans who escaped to the Inner Sphere. With the formation of their own grand council and barring of the Home Clans, the Clan Occupation Zones would now serve as the permanent homes for the remaining Spheroid Clans.[16]

After the Jihad, some of the Clans would merge with their Inner Sphere counterparts or revert to their original names. In 3085, Clan Snow Raven and the Outworlds Alliance would merge to become the Raven Alliance.[17] After the censure of Clan Diamond Shark and news of their original namesake totem flourishing in various Inner Sphere worlds, the Clan would revert to Clan Sea Fox and reform as a nomadic trading Clan in 3100.[18] The Ghost Bear Dominion would finally merge with the remaining worlds of the Free Rasalhague Republic, calling themselves the Rasalhague Dominion in 3103.[19]

The most drastic change of the zones happened during the Dark Age. In 3136, Clan Wolf abandoned their zone, already greatly reduced, when Alaric Wolf relocated all his Clan into Lyran Commonwealth space, creating what they called the Wolf Empire.[20] Their old zone was quickly conquered by their neighbor Clans, mainly by the Hell's Horses, who conquered twenty-two of their worlds, including the former Wolf capital, Tamar. By 3145, The Bears and Falcon zones have expanded even more (the first mainly after absorbing the Vega Protectorate), conquering dozens of worlds from the Combine, the Commonwealth and the Republic of the Sphere.[21]

After the ilClan Trial, the Clan Occupation Zones underwent another change, this time with Clan Jade Falcon. Sensing the opportunity to take further advantage of the Jade Falcons' departure to Terra, Clan Hell's Horses launched Operation Stampede as a way to claim many of their planets.[22] The Lyran Commonwealth also reclaimed many worlds previously lost to the Falcons, while Commonwealth defectors formed their own nations, such as the Vesper Marches[23] and Tamar Pact,[24] in a region known as "The Hinterlands".[25] At the same time, many Falcon warriors set up their own leadership away from the Clan (Turkina Ascendancy and Alyina Mercantile League). The Hell's Horses continued to claim many planets until their run-in with the Jade Falcon remnant led by Khan Jiyi Chistu. Khan Chistu led his remnants in a successful victory during the Battle of Sudeten, pausing Operation Stampede and stopping the Hell's Horses in their tracks.