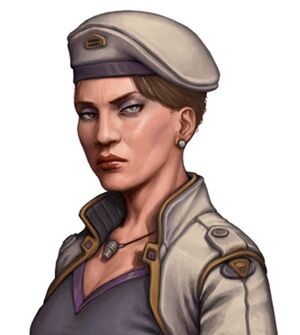 Alys Rousset-Marik (b. 3041[1]) is the youngest child of Kristen Marik and Jiri Rousset. The couple ran the mercenary unit Kristen’s Krushers, and Alys entered Princefield Academy in 3059 to become a part of it. Her two older siblings, Ana and Janos, were already officers within the unit. During the 3060s, the FedCom Civil War found Kristen’s Krushers on Coventry and then Arcadia, where the unit was smashed and Kristen, Ana, and Janos were all killed. Alys blamed the man whom she believed to be her uncle, Captain-General Thomas Marik, for not doing enough to save her family.

This left Alys as the sole heir to her mother’s mercenary unit, as well as Kristen’s little-used title as Duchess of Augustine. Alys spent the next few years under the radar, raising her orphaned nephew, and allowing her father to run the mercenary unit (renamed "The Krushers") she inherited in all but name. In 3067, she gave a speech to the Parliament of the Free Worlds League wherein she called upon them to declare "the emergency" in Resolution 288 over, removing the permanent status of the Captain-General, which would have the immediate effect of removing Thomas Marik from power. While this would also severely curtail the power of House Marik in general, Alys put herself out in front of the growing resistance to Thomas' attempts to centralize power. What emerged from her call was entitled the "Great Debate," which ultimately came to nothing as Parliament voted to keep the position of Captain-General permanent. 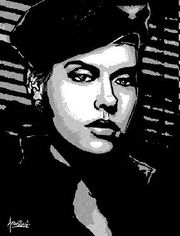 Alys unwittingly played into the Word of Blake’s hands by raising this issue, as it served to keep the League fractured. This made it easier prey when they turned their Jihad to the League in 3068. For her part, Alys called upon the Free Worlds League Military to unite behind Thomas, even after the Blakists exposed "Thomas" as an impostor. After the gas attack against the Parliament on Atreus,[1] in 3070[2] Alys finally took over The Krushers and turned their night-fighting expertise against the Blakists. Forming the core of Alys' resistance, The Krushers were a key unit that actually hired other mercenary units to fight alongside the resistance. She ran her resistance unit, sometimes known as the Free Worlds Resistance, from the shadows and removed herself from public view. With the Word of Blake now sending brain-washed suicide bombers, she was forced to take more security measures to protect herself.[1]

Alys was selected by the allied coalition to be the commanding officer of the Free Worlds League front of Operation SCOUR in January 3077. Some believed that Alys was selected as a compromise due to political or military problems with selecting other possible leaders such as Christopher Halas, Selim Halas, Albrecht Kiel, Leonard Stewart or Photon Brett-Marik, although Alys quickly proved her ability to work well with others such as Reginald Brett-Marik.[3] Khan Santin West of Clan Nova Cat was appointed as Alys' second in command, while Precentor Harris Harvison of the Com Guard 5th Army, Leutnant-General Paul Zardetto of the 3rd Lyran Guards and Duke Leonard Stewart served as Alys' senior field commanders.[4]

Rumours began to circulate in November 3077 that some form of accommodation between Captain-General Corinne Marik and the allied coalition was being negotiated, with an agent - believed to be Daniel Schulz, aide-de-camp to Alys - supposedly holding a number of meetings with representatives from the Captain-General to discuss options.[5] Atreus was liberated from forces from the allied coalition in mid-December 3077, and around the 19th of December Alys issued a statement clarifying what had happened. Alys stated that with Atreus free, Corinne Marik was attempting to attach supplemental conditions to an accord reached with the allied coalition, ignoring terms from the accord that included the surrender of Paul Marik and other high-level figures to stand trial for war crimes, and Corinne’s abdication from the post of Captain-General pending new parliamentary elections. Unwilling to hand over Paul Marik, Corinne had also refused to abdicate and allow arbitration by parliament, instead declaring that she would only step down in favour of her chosen successor: Alys Rousset-Marik. Alys claimed to have turned down Corinne’s demands, stating instead that the people of the Commonwealth would decide matters on Atreus and that she would be heir to no throne.[6]

Alys' political acumen allowed her to gather allies, forge political alliances and even negotiate for assistance from some of the Word of Blake’s allies during the Jihad, and proved to be her greatest strength; unfortunately, her abilities as a strategic commander were somewhat lacking compared to her political abilities. This, combined with faulty intelligence and poor planning slowed the efforts of Alys' resistance forces and diminished their contribution to Operation SCOUR, as did a number of setbacks on the battlefield. This often resulted in the resistance forces having little choice other than to conduct hit and run attacks which were less effective than those tactics used by other forces.[7]

Despite the mutual non-aggression pact established between Alys and Corinne, in 3079 the 1st Free Worlds Guards were still maintaining a blockade that prevented Alys' return to Augustine, a blockade born out of the belief that in following Devlin Stone, Alys was betraying the League to foreign interests.[8] Corinne had evidently agreed with Alys at some point that the former Free Worlds League planets incorporated into the Word of Blake Protectorate would be allowed to choose who would govern them in the future, but Corinne was evidently unwilling or unable to enforce that agreement, at least initially. In defiance of whatever had been agreed the Home Guard were still in place on Stewart and the Gryphons on Kalidasa in August 3079. Alys contacted Corinne on the 10th of August 3079 and indicated in relatively blunt terms that the occupation of both worlds by the two regiments wouldn't be tolerated, even though Alys and her resistance forces had fought alongside the Home Guard and the Home Guard continued to regard Stewart as their homeworld. Spelling out that the Free Worlds League had foreited the right to govern the worlds since allowing them to be occupied by the Blakists and that their fate shouldn't be dictated by whichever local force had the largest army, Alys served Corinne with an ultimatum to remove both regiments. She also indicated that she intended to return to Augustine, but would not subject herself to Corinne's rule.[9]

Unwilling to accept calls to attempt to take the position of Captain-General, Alys served as a negotiator between the various provincial states left after the League’s breakup and the Republic of the Sphere.[7] Alys was already noted as creating the potential for a merger between the Protectorate and the [{Duchy of Oriente]] as early as 3079, a merger made possible by the co-operation between StarCorps Industries, the Halas family and Alys that led to the design and manufacture of Kopis battle armor.[10]

After the Jihad Alys enjoyed a reputation as a hero on those Free Worlds League worlds that had either bordered the Word of Blake Protectorate, had been subsumed into it, or which felt as if they had been neglected or abandoned by the League. The combination of Marik blood, heroism in battle and her forthright, unpresuming nature made her almost an idol, revered as if she were a mix of media star and saint. Her call to dissolve the League was popular even before the Jihad on many of the worlds which would become independent, giving her many supporters beyond the worlds she brought into the Republic of the Sphere.[11]

However popular Alys was on many League worlds, she was also in part responsible for the antagonistic attitude taken by the Marik Commonwealth towards the Republic of the Sphere; Alys' opposition to the existing conventions of the League and her refusal to take advantage of the positions made possible by her birth and status made Alys unpopular with many in the Marik Commonwealth.[11]