Albert Benton (b. 2997 - d. 30??) was a thirty-first century House Kurita MechWarrior, officer, and commanding officer of the storied Sorenson's Sabres BattleMech Company. In his youth, Albert used his average features to blend into crowds and not be noticed when he was up to something. He had a strong interest in technology, which led him to become a competent engineer in his day. When he joined the Sorenson's Sabres, he began to learn interrogation techniques. He was noted for possessing natural charisma and aptitude in his later years.[2][3][4]

Albert Benton was born on Galedon V, and when he joined the DCMS, he was assigned as ammunition loader for an Artillery Unit at a very young age. During combat with House Davion, his unit's artillery piece knocked out an enemy Stinger. He discovered that its pilot had been killed by the shell, but the 'Mech remained operational. When Davion recovery crews retrieved the downed BattleMech, he followed in a jeep into Davion held territory. After observing activities of the techs, he knocked out a guard and stole the recovery vehicle with the Stinger on-board. In a matter of frantic hours he returned to Kuritan-controlled lines with his newly-acquired BattleMech which he named Lucky Star.[5]

Benton and the rest of the Sabres were assigned to be part of the 36th Dieron Regulars to help break a deadlock on the contested world of Quinn in January 3026. Benton was disgusted by the death caused by the Hungry Ghosts of the 36th Dieron who targeted civilians and dependents of House Davion forces to break their morale. Westham Valley turned into a battlefield as Benton and his forces fought a vengeful Davion-employed mercenary unit, Swann's Cavaliers, while Albert attempted to cover the true butchers, the 36th Dieron.[6]

In June 3026, his DropShip was shot down by Davion fighters and crash landed before a planned raid on the world of Errai. Benton lead the way for his lance through the Red Forest, which was filled with Davion infantry troops. The Red Forest's dense trees scrambled their sensors on their journey to meet with Tai-i Sorenson and the rest of the company. Despite the enemy's advantages, the unit was able to march through the forest.[7]

Albert was deployed with the rest of the Sabres and 5th Sword of Light in 3029 to Northwind in Fourth Succession War. They were given the unusual mission to pilot their 'Mechs through a major metropolis' water reservoir; their BattleMechs' lower halves were freshly painted in an effort to poison the city. The unit then fought a sickened 5th Deneb Light Cavalry, which had been hit by food poisoning. While fighting with the rest of the 5th Sword, Genyosha and other Kuritan regiments joined the fight. Their attempt to secure the planet for the Dragon failed due to the arrival of the Northwind Highlanders. In the battle with the Highlanders Albert lost his Stinger. He was then assigned to a PNT-9R Panther before the 5th Sword would arrive on Nusakan later that year. Albert's unit fought the Kell Hounds on the outskirts of the battle, and only took minor damage, but Conti's defeat in his duel would leave everyone in dishonor.[8]

The Rise and Fall of the Sabres[edit]

After the War, the unit spent several years conducting border raids along the Davion border. While on Togura in 3034, the Free Rasalhague Republic's formation was announced. This caused a stir among the members of the Sabres, of whom a quarter were Rasalhagian in descent, including Tai-i Sorenson and Albert's Chu-i. In an argument, Sveinson and Soderstrom got into a fight over Sorenson's decision to remain in the Combine. After punching Sorenson, he ordered them incarcerated. The next day, Albert was on the march in his Panther pursuing his former lance leader and other former comrades. The resulting battle with them would leave the Sabres dead and the unit spiritually broken. When they returned to base after the battle, they received word from Kanrei Theodore Kurita which decreed that all Rasalhagian soldiers who wished to resign to join the new Republic were free to do so. The Sabres received orders to train new soldiers of the Republic on Damian.

On Damian in February of 3035, the unit failed in its duty to train the Republic's soldiers properly and they also failed to stop the Bandit King Hendrik Grimm from taking valuable goods from the planet. Albert and his unit were soon reassigned to Enif and exiled from the 5th Sword of Light.[9] During this time Albert traded his Panther for a ComStar "gift", a MON-66 Mongoose.

On the Sabres' reassignment, Albert was promoted to the rank of Chu-i of their Pursuit Lance. He and the rest of the Lance Leaders continued to do drill work to rebuild the unit's lost cohesion and sense of belonging. Eight years after being sent into exile and Sorenson's efforts to rebuild the unit's soul, they were put to the test. In 3042, pirates out of Antallos struck the planet; after tracking them, they discovered the pirates were not after armor factories, but the planet's food warehouses. Albert's lance, with a fire lance, flanked the enemy raider force and crushed them with firepower and speed. They managed to capture a Union Class DropShip, and the battle was a resounding success, which marked the Sabres' new road to recovering their honor.

A few months later, slaver pirates raided the planet during a training exercise. Albert's Command Lance was forced to withdraw, re-arm hastily, and help the Fire Lance combat the pirates. The unit was able to capture the commander of the force, who turned out to be the consort of “Mad” Max Smythe, an infamous pirate slaver of Antallos. They learned from her that early pirate raids against the planet were elements of the Band of the Damned. The Sabres then set out on a year-long hunt to find the Warlord of Galedon and to stop the slavers and the Damned. Though there were only a few successes, the unit proved its worth to the DCMS's high command, and was re-attached to the 5th Sword of Light once again.[10]

In 3049, the Sabres received orders to probe into the Federated Commonwealth's Draconis March to look for signs of possible invasion. Raids within the last two years caused the leadership of the Combine to become concerned of impending invasion.

Through the course of hitting various worlds in the Federated Commonwealth, the unit found little regarding the invasion. However, Davion raids of the border in 3047 turned out to be Fox's Teeth, an elite Davion independent company. Albert and the rest of the Sabres moved to raid the Fox's base on Benet III. In a brutal all-out battle, the two forces kept fighting until the Sabres felt honor had been satisfied for the Dragon, and they withdrew.[11]

After the Campaign of 3048-'49, The Kanrei recalled the unit to Luthien. There the unit, was awarded status as a true independent BattleMech Company, no longer attached to any frontline combat unit. With the Sabres slipping from TO&E of Combine, they became a black ops unit.

Here Albert developed a relationship with Luthien Armor Works, while the unit conducted trials of new and experimental equipment for the Combine. He took part in the testing of the Blackjack Medium OmniMech. By 3060, his Mongoose he had nicknamed Gunner, was re-assigned to the 2nd Sword of Light. LAW's Research and Development section gifted him a Black Hawk-KU Heavy OmniMech for his extensive help did with the new Blackjack.[12]

In 3061, Albert's long time commander, Daniel Sorenson retired from service. He was elevated to Tai-i and assumed command of the unit. He in moving speech at the change of command ceremony, announced unit would forego changing the name of the unit as it been tradition of the company parent's regiments tradition.[13] He announced the unit would retain the name in honor of Sorenson's duty and honor of holding the company together through his years of service.[14]

After taking command, Albert and his command were moved to the Clan Ghost Bear border worlds, where with newly held freedom maintain vigilance against any Clan intrusion.

In 3062, the Combine-Ghost Bear War broke out due to efforts of the Black Dragon Society influenced Alshain Avengers Brigade trying to take their homeworld back from Clan Ghost Bear. Albert exploited the unit's independence and raided a number of Dominion worlds during the conflict. His exploits earned respect of the Ghost Bears to requested that he and his unit to Courchevel, for a Trial of Possession which would end dishonorable war in honor. His noted action of the Trial, when in a personal duel, he took down a Kingfisher Assault OmniMech.

After conclusion of the War, Albert and his command were then returned to Luthien. There he was given the honor of being attached to the Coordinator's personal bodyguard unit, the Otomo. [15] 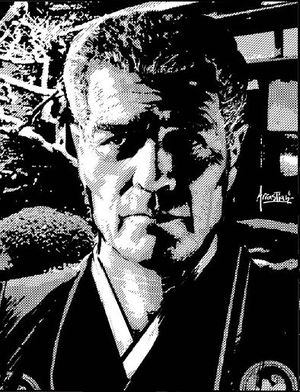 In 3068, the Black Dragon Society influenced most of the 2nd Sword of Light to seize Imperial Capital. Albert and his Sabres were able to escape the fate of the majority of the Otomo. He led the unit through the fires of war for control of the capital, to join forces with the loyalist aligned 1st Genyosha and survivors of the Coordinator's bodyguard units to help combat the ronin Black Dragon forces. Over course of early years of the occupation of Luthien, Albert led his unit in attack and fade tactics against the rebel forces in the ruins of the capital city. This continued until people with Lord Chandrasekhar Kurita, convinced join his team of troops to fight the true enemy of the Combine, The Word of Blake.[16]

After initial battles against the Blakists with Lord Kurita's Hachiman Taro Electronics, the death of Uncle Chandy led him into working with Devlin Stone's Coalition. As part of the Coalition he became liaison to Clan Ghost Bear who had joined the fight against the Blakists. His duel in 3063 at the end of the Combine-Ghost Bear War won him the respect needed to be a liaison officer to them. His leadership and tactics with his unit fighting along side the Ghost Bears in the Protectorate proved to be a boon for Stone's Coalition. During the campaign, his Black Hawk-KU begun to show wear and tear, despite offers by the Ghost Bears to replace it with a true Nova. He took up an offer to have his machine fitted out with Clan weaponry instead.[17]

In August 3078, Albert and the Sabres would be assigned to participate in the retaking of Terra in Operation SYCTHE. Assigned to Task Force MALLET, he was initially assigned to command the operation to take the city of Athens with his Sabres and The Battle Corps mercenary command. Under the direction of General Lee, Albert's command worked with other special operations units which successfully retook the city in a near bloodless fight.[18]

In his very early career, he was known to pilot Light BattleMechs, starting with an "acquired" Davion Stinger BattleMech named "Lucky Star". It was noted that he was known as one of the best Stinger pilots in the Inner Sphere.[19] After the 'Mech's destruction in 3029 during the 4th Succession War, he was reassigned to a Panther. By 3034, he was given a MON-67 Mongoose while giving up his Panther to a newcomer of the unit. When he assumed command of the Sabres he was gifted by LAW with a new Black Hawk-KU.[20] The 'Mech was re-configured by 3075 with Clan weaponry in place of Inner Sphere weapons. The 'Mech retained its C3 Master Computer, which it had started with.[21]

Using the special individual MechWarrior advance rules found in Starterbook: Sword and Dragon, Albert has been given the following ability: When using or leading a lance of 'Mechs, he gives them the Off-Map Movement ability.[22]