The Otomo are the Palace Household Guard of the Draconis Combine. Slightly more than a regiment in size, their sole purpose is to protect Unity Palace on Luthien and the Coordinator. Members of the Otomo are taken from Sword of Light regiments and the five military districts. The Coordinator assembles a list of potential members, who are then investigated by the Internal Security Force.[1] Unit composition is a mix of 'Mechs, armor, and infantry. Traditionally, only a member of the Kurita family can become commander of the Otomo.

Membership in the Otomo is restricted to the most highly skilled soldiers of the DCMS. However, seeking appointment to the Otomo is seen as self-aggrandizing. Instead one is chosen for a position in the Otomo.[2]

The Otomo would accompany Coordinator Minoru Kurita during the Combine's First Succession War drive into the Federated Suns but were ultimately unable to protect him from assassination by an Armed Forces of the Federated Suns sniper on Kentares. After Minoru's successor Jinjiro Kurita arrived on-world and ordered his troops to "Kill them all", when one of his generals sought further explanation of his command, Jinjiro ordered the Otomo to shoot him which they immediately did as a stark message to his remaining generals.[3][4]

As the Coordinator's bodyguard unit, the Otomo spent the Fourth Succession War on Luthien.

During the Clan Invasion, the Otomo fought in the Battle of Luthien. In the course of the fighting the Otomo separated into company-sized units and opened lines of retreat, stalled enemy breakthroughs, and filled gaps that appeared in the DCMS lines. When outnumbered and isolated, they fought multiple foes at once to ensure that the Dragon would face fewer enemies.[1] As a result of this, they took heavy casualties. The regiment was not rebuilt to complete strength until 3054.[citation needed]

The Kokuryu-kai elements of the Otomo turned on Coordinator Theodore Kurita. However, the mercenary command Camacho's Caballeros and the 9th Ghost Regiment intervened and stopped the traitors.[5] Also, the Coordinator's illegitimate son, Franklin Sakamoto, had arrived to defend his father. The Otomo went through a brutal purge, with Sakamoto becoming the commander of the Otomo infantry companies.[6]

In December in 3067, forces loyal to the Black Dragon Society invaded Luthien. On New Year's Day, 3068, the Kokuryo-kai Second Sword of Light surrounded and then attacked the Imperial Palace. The Otomo and their fellow samurai Izanagi Warriors fought a delaying action while the Loyalist 3rd Luthien Guards retreated, taking heavy casualties (including the loss of Griffon Meshune) in the process.[7][8] When the commanding officer of the Second Sword of Light, Tai-sa Li Sak To, attempted to execute a number of captured members of the Otomo one of his own officers defied him. Chu-i Takiro Hutchinson recognized that Li Sak To's actions were wrong, and in an act of defiance maneuvered his Katana between To's Akuma and the prisoners, preventing him from murdering them in cold blood. To and Hutchinson then fought each other savagely, a battle that polarized the Second Sword of Light and gave the prisoners time to escape. Although many of the prisoners including Franklin Sakamoto were subsequently recaptured they were able to sound the alarm and thereby alert the First Genyosha. Following the battle fragments of the armor from Hutchinson's Katana were carried by the other members of his lance as reminders of their duty to the Dragon.[9]

The coup devastated the Otomo and the Izanagi Warriors. The two units' survivors joined the First Genyosha in fighting the traitors, operating under the control of Sho-sho Sajori Mitsotisa. They performed as raiders, noted for their precision and later salvage operations.[7]

On 23 August 3072, the joint unit - in a concerted effort alongside the Xi Galaxy of Clan Nova Cat - assaulted a large Blakist supply base defended by the Forty-second Shadow Division, in the Battle of the Kyoto Zen Arcology Project. The DCMS flanking attack was intended to sow confusion within the Blakist defenses, and though deflected, did just that. A Star was able to breach the rear of the base and set off an enormous chemical explosion, resulting in the destruction of multiple units on both sides and a significant loss to the Blakist ammunition supply.[10]

On March 14th 3074, the Word of Blake ROM had leaked information regarding the presence of Buda Weapons Chief Researcher Hideoshi Yamika and his prototype Large X-Pulse Laser to the Kokuryu-kai as a means of wearing down Loyalist defenders in Skytower City. The resulting battle ended with Yamika and his prototypes being hustled aboard a Blakist DropShip.[11]

After the liberation of Luthien in December 3074, the unit was scheduled to be rebuilt around the survivors.[7]

The Otomo relocated to New Samarkand when the Coordinator moved the Draconis Combine capital to that world. Though they were highly skilled raiders, the Battle of Luthien inflicted heavy casualties on the Otomo. They could have avoided many of these casualties, but they refused to sacrifice Combine civilians.[12]

The Otomo's ranks dropped to a third of their pre-Jihad strength, and as of 3085 they were barely above the halfway point of their nominal strength. Though they could rebuild more quickly from the ranks of elite warriors in the DCMS, the Coordinator chose to build more slowly. This decision slowed the growth of the Otomo, the DCMS as a whole benefiting from the presence of elite soldiers. The three survivors of the 3rd Night Stalkers regiment were inducted into the Otomo to reward their continual resistance to the Word of Blake.[13]

The Otomo as of 3145 now carries more than a full regiment of BattleMechs and an expanded battalion of battlesuit infantry. Though there is much criticism of this as other units struggle to fill their ranks. The only justification given is that of its CO says the extra security is needed due to the current war with the Federated Suns, and in order to not let a failure like the death of Vincent Kurita happen again.[14]

The Otomo specialize in defensive tactics, performing like an elite support unit. The regiment is always the last to leave any battlefield.[17] Despite this specialization in defense, they are skilled at all forms of combat, from small unit action raids to planetary invasions.[2] 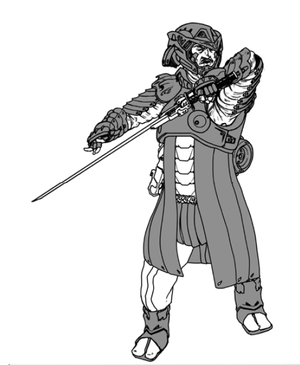 An Otomo personal guard with Vibrokatana and Ballistic Plate Armor

Note: At this point in time the command was stationed on Luthien.[22]

Note: At this point in time the unit was stationed on Luthien.[15]

Note: At this point in time the unit was stationed on New Samarkand.[23]

The unit's insignia is a gold shield with the official Kurita crest painted on the 'Mech's upper left torso. The Otomo 'Mechs use a flat black paint scheme with gold highlights in battle and on parade.