Therese Marik was born on Paradise.[2] She was the third child of Janos Marik and his first wife, Hilda Lauber.[3] Her elopement with Jeremy Brett caused a rift between her and her father. It was not until Thomas Marik acceded to the Captain-Generalcy that she reconciled with her family. During the Jihad, Therese seceded the Duchy of Tamarind from the Free Worlds League.

She was known to enjoy falconry.[4]

Therese was a good child, always obedient to her parents. Her father, Captain-General Janos Marik, wanted her to marry a prominent official within the Regulan Free States, Corbin Tkaczuk, to foster an alliance. She refused and, in her only act of rebellion, eloped with then-Captain Jeremy Brett. Brett was an artillery commander who was described as "handsome" and "dashing", but he was not the man her father wanted her to marry. Therese was publicly disowned by her father and Brett found his commission cashiered. [2] 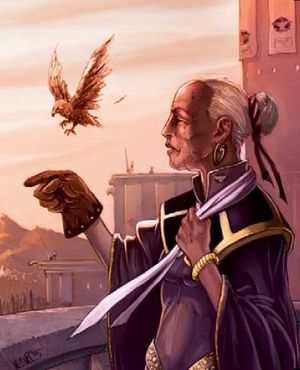 Therese and her husband relocated to Khe Shang province on Tamarind. There, she became a staff officer with the Tamarind Defense Forces and he served as the commander for Khe Shang's static defenses. As early as 3025, Therese's "high virtues... endeared her to the populace".[2]

The early 3030s saw an insurrection on Tamarind. The democratically-elected government of Prime Minister Otho Korituk was a disaster and the people were tired of it.[5] In 3035, Therese was elected governor of Tamarind.[6]

After Thomas Marik became Captain-General in 3036 and the Andurien Crisis ended, Therese was welcomed back into the family. She stayed in relative obscurity, earning a reputation as "a skilled politician and administrator".[7] That changed when Word of Blake unleashed their Jihad.

When Word of Blake revealed that the man who was Captain-General was not, in fact, Thomas Marik but an impostor, Therese maintained her support of him.[8] Jeremy Brett released a statement on behalf of he and his wife in June 3069 to that effect.[9] Therese hoped that her support would lead to a place in the succession for one of her sons.[6] A coup took place two months later that deposed "Thomas Marik" and placed Corinne Marik on the throne.[10]

With Paul Marik, the apparent mastermind behind the coup and in collusion with Word of Blake, Therese discussed declaring herself the rightful Captain-General as Janos Marik's oldest surviving child, preempting any attempt the real Thomas Marik might have made to claim the position.[11] On 19 November 3071, Therese made the simultaneous announcements that her husband had been assassinated by Word of Blake (by using Richard Steiner as a living bomb) and that she was declaring Tamarind's independence, with herself as Duchess. She installed her son Photon as military leader.[12][13][14] She largely remained out of League politics, though she did send her son Reginald to liaise with Devlin Stone.[6]

In January 3078 she sent a letter to Archon Adam Steiner pleading for peace since both powers were part of Stone's coalition against the Word of Blake.[15][16]