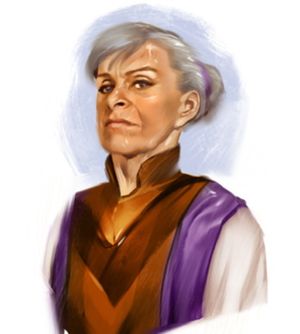 Jeremy Brett was a captain in an artillery lance within the Marik Militia brigade when, in 3008, he eloped with Therese Marik, the third child of Captain-General Janos Marik. In response, Janos disowned Therese and had Brett cashiered from the Free Worlds League Military.[1][2][3][4] The couple relocated to Tamarind where, in 3011, Therese gave birth to their first child, Reginald Brett-Marik. A second son, Photon followed in 3014.[5] During this time, Jeremy served as commander of static defenses of the Khe Shang province. The couple was content to live in relative obscurity, though Therese's Marik name and virtue made her popular.[2]

By 3032, Therese began working as a planetary administrator of Tamarind.[6]

In 3033, Jeremy Brett's son, Photon, enlisted in the FWLM. To avoid even the appearance of nepotism, he enlisted under the pseudonym Urien Domei, and would receive no direct support from his parents or other members of the Marik family. His true identity would not be publicly revealed until 3048.[7][3] Photon would go on to serve with distinction during the Andurien Secession Wars.[8]

In 3035, the same year her father was assassinated, Therese Marik returned to public life as she was elected governor of Tamarind.[9] Janos would die before Therese could be reconciled with her father.[6]

In the aftermath of the Andurien Secession Wars, Therese and Jeremy put their full support behind Thomas Marik as the new Captain-General, helping to bring to a close decades of infighting within the Marik family.[10] Back in the good graces of House Marik, Jeremy Brett's star soon began to rise.

Sometime prior to 3059, Jeremy Brett was promoted to the rank of Marshal of the Tamarind Military District, and as such was a high-ranking member of the LCCC.[11]

By 3062, Jeremy Brett's son, Photon, had reached the rank of Lieutenant-Colonel and was the executive officer of the prestigious 2nd Free Worlds Guards.[3]

Although the Captain-General had declared the League neutral when the FedCom Civil War broke out in late 3062, circumstances nevertheless drew Brett and the league into the conflict. When fighting broke out on the planet of Coventry, the mercenary unit Kristen's Krushers, despite being in the employ of the Lyran Alliance and having dutifully followed orders in attacking the Coventry CPM, were themselves betrayed and attacked by the pro-Katherine 1st Coventry Jaegers. The Jaegers commander apparently held a long-standing grudge against House Marik, and the Krushers were commanded by Kristen Marik, youngest surviving child of Janos Marik and therefore Jeremy Brett's half-sister-in-law. Kristen Marik's daughter, Major Ana Rousset-Marik, and many others were killed before the Krushers could withdraw to their DropShips. Making their way through the Alliance, the Krushers were forced to launch a raid on Gallery for food and basic supplies. Though they were successful, this incurred the wrath of General of the Armies Nondi Steiner, the Duchess of Gallery. General Steiner ordered the mercenaries destroyed. Finally cornered on the world of Arcadia on the Alliance-League border, the severely depleted Krushers were being overwhelmed by the 2nd Donegal Guards. Brett, acting against the expressed commands of the Captain-General, deployed the 6th Marik Militia to rescue the beleaguered mercenaries, an action that was officially termed a "forward deployment". The Militia were successful, driving off the Donegal Guards and laying claim to the planet. Unfortunately, Kristen Marik soon died from injuries suffered during the fighting, and only two companies of the Krushers survived their ordeal. Thomas Marik publicly reprimanded his brother-in-law for his "adventurism" and returned Arcadia to Lyran hands at the war's end. However, many others in the Free Worlds League were impressed with Brett's initiative and success, and many in the Tamarind district hailed him as a war hero.[4][12][13][14][15][16][17][18][19][20]

In 3067, after the FedCom Civil War, Therese and Jeremy sent their son, Photon Brett-Marik (by now a colonel, and commander of the Second Free Worlds Guards)[21] to Atreus for a private discussion with Alys Rousset-Marik and Corinne Marik to express his family's support for Alys' proposal that Parliament bring an end to Resolution 288, which gave the Captain-Generalship its power and had been in effect for centuries. This sparked a Great Debate in Parliament over the powers of the Captain-General for several months.[22]

With the failure of the Star League at the Fourth Whitting Conference and the dawn of the Word of Blake's Jihad in late 3067, war soon spread throughout the Inner Sphere. When General Helen Thrall of the Sirian Lancers was assassinated on December 24, supposedly at the hands of Lyran Alliance operatives,[23] Sirian radicals retaliated against the Alliance by sending the FWLS Percival, the 2nd Sirian Lancers and a flotilla of DropShips against the district capital of Skye. Stymied in the efforts to invade the planet on the ground, the Free Worlds fleet instead bombarded Skye from orbit, inflicting massive damage and casualties against both defending forces and civilians.[24] Duke Robert Kelswa-Steiner retaliated by declaring war against the League, in cooperation with the Bolan Province.[25] The Lyran invasion, codenamed Operation ÜBERSCHATTEN, was initially overwhelmingly successful. They achieved complete surprise over the League forces, and with Thomas Marik still in transit back to Atreus from Tharkad and favoring a diplomatic response, the FWLM was unable to coordinate itself.[23]

It fell to Marshal Brett to rally the League's military, initiating Operation Broken Fist to not only recover worlds lost due to Lyran aggression, but also to strike into Alliance territory, making the Lyrans pay for their invasion. Though limited in troop reserves, Brett's call to action galvanized the forces he could call upon, and again made him a hero amongst the people.[23][26][27] Brett also began hiring mercenary units such as the Langendorf Lancers[28] and O'Gordon's Rifles[29] to join in his counteroffensive. In the following months, Brett's forces returned many worlds to the Eagle's banner, beginning with Colfax and McAffe.[30] These counterstrikes effectively destroyed the 4th and 11th Lyran Regulars and the mercenary Gabhardt's Carabineers, all this helping to stall the Lyrans' momentum.[31] By the end of July 3068, Cascade, Gallatin and Ideyld would be liberated, shattering the 1st Skye Jaegers and forcing them to retreat along with the Skye Guards.[31]

By mid-September, League forces had seized Alchiba, Milton, Phecda, Wyatt, Timbiqui, Poulsbo, Dixie and Arcadia from the Lyrans, throwing Kelswa-Steiner's supply lines into chaos.[32][31] One notable event took place on Giausar, where the 1st Knights of the Inner Sphere, the 20th Marik Militia and the mercenary company Pico's Pathfinders quickly destroyed the Wilde Turkeys mercenary unit. The mercenary One-Eyed Jacks and the planetary militia rallied, however, crushing the Pathfinders and striking the 20th Militia hard. Near the height of the campaign, the Knights unexpectedly withdrew, recalled to Atreus by the Captain-General and leaving the Militia to fend for itself. Jeremy Brett's forces would ultimately prevail, however, forcing the Lyran mercenaries to retreat. The battle was termed a bloodbath, with severe damage to supply caches and contaminated water supplies.[31][23][33][34] This recall would also apply to the 2nd Knights of the Inner Sphere, who had only just landed as part of a taskforce attacking Cavanaugh II. The recall of the Knights, and several other units, came just as Brett's offensive into Lyran space was gaining ground. Despite the loss of support from those elite troops, Brett's forces would soon take Cavanaugh II as well as Loric, Ford, Khon Kaen and Penobscot.[33][32] Though Brett's forces were weakened by these departures, by mid-October, 3068, League forces had struck at Syrma and Zebebelgenubi.[35]

On October 25, 3068, the Word of Blake attacked Atreus by unleashing a massive chemical attack, killing most of the League's Parliament and much of the First Knights of the Inner Sphere. Simultaneously, the Blakists revealed that the Thomas Marik who had served as Captain-General was a double who had been put in place years before by ComStar. The Word then flooded the HPG Networks with "white noise", crippling communications throughout the Sphere.[35] Surprisingly, most of the extended Marik family, including Therese and Jeremy Brett, threw their public support behind the Captain-General, calling on their people to support federal authorities.[36][37][26] By mid-November, 3068, Operation Broken Fist was still ongoing, but Brett's forces suffered a major setback when the FWLS Sardis and its entire battle group went rogue, leaving their post in the Tamarind system and departing for space unknown.[38] By late November, Syrma was under counterattack by the Lyrans, forcing the 1st Free Worlds Guards to withdraw.[39] Zebebelgenubi was also retaken by the Skye forces.[31]

In April 3069, facing a lack of support from Atreus and acknowledging the dangers now posed by the Word of Blake, Brett formally commanded Free Worlds forces to withdraw to their prewar borders.[40] In August 3069, Thomas Marik was removed from power in a coup that left Corinne Marik as the Captain-General on Atreus, supported by the Word of Blake.[41][26] In late October 3069, Brett made a formal offer of a ceasefire to the Lyran Alliance, citing Blakist activity and the interests of peace. Due to Blakist interference, the message was not received for over a month.[42][43] The offer was accepted by the Duke of Bolan.[44] By the end of December, the League's withdrawal from Alliance worlds was complete.[45]

The Duchy of Tamarind

In January 3070, in covert communications between Therese, Jeremy and Alys Rousset-Marik, Therese expressed a desire to declare herself Captain-General while Alys indicated her support.[46] Even after the ceasefire with the Lyrans, the Duchy of Tamarind and Marshal Brett continued to be a major employer of mercenaries in the Inner Sphere, facing pressure from the Word of Blake Protectorate, the Marik Commonwealth and elements within the Alliance.[47] In February 3071, the Principality of Regulus pulled the 2nd Regulan Hussars from Brett's command over his protests to use them in operations against the Duchy of Oriente.[48]

On October 7, 3071, Marshal Jeremy Brett met with an old adversary, Richard Steiner, who had been Margrave of the Lyran Alliance's Cavanaugh II Theater until he fled on suspicion of war crimes during the FedCom Civil War. Steiner had suddenly appeared on Tamarind, seeking an audience and claiming to have information regarding the Word of Blake's plans for Tamarind. Despite a thorough scan, Brett's aides did not detect that explosives had been grafted to Steiner's skeletal structure, nor were able to learn that Word of Blake had, at some point, captured and brainwashed Steiner. After shaking Brett's hand and declaring "Blake's Vengeance be done!", Steiner detonated the explosives, killing Brett, himself and the Marshal's aides.[26][49][50][51]

In response, Therese Brett-Marik formally declared the Duchy of Tamarind independent of the pro-Blake Marik Commonwealth, arguably representing the last nail in the coffin for the once mighty Free Worlds League. She further named Photon Brett-Marik as his father's successor as Marshal of Tamarind. While not formally declaring war on the Commonwealth, she made clear any further Blakist attacks would be met with force.[9][26][52] In time, Therese would send her other son, Reginald Brett-Marik, to act as an emissary to Devlin Stone's coalition against the Blakists.[9]

Jeremy Brett was described as tall and lanky, physical traits he passed down to his son, Photon.[22] He was clearly devoted to his wife, Therese, and suffered her banishment from court without complaint. Brett proved to be an excellent strategist and highly respected leader. His discussions with various members of the Marik family showed an amicable man who placed the needs of the people of the Free Worlds League ahead of personal ambitions, and who was willing to work with difficult personalities to achieve this.[37] As military commander of the Tamarind Military District and later the Duchy of Tamarind, his achievements against both the Lyrans and the Word of Blake led to Brett being proclaimed a hero and even a military genius.[53] He was further described as a charismatic leader whose death severely hampered the Duchy's war efforts against the Blakists.[54]