Janos Ricard Thaddeus Marik was the eldest son of Captain-General Stephan Marik. He succeeded his father to the Captain-Generalcy of the Free Worlds League upon Stephan's death in 2991. Janos ruled the League during the end of the Third Succession War and during the Fourth Succession War. He prosecuted that latter war ineffectively, losing territory to the nascent Tikonov Free Republic, which was later absorbed into the Federated Commonwealth.[4]

Against his father's wishes, Janos attended Princefield Academy in Oriente, the first time in decades that a Marik did not receive his or her training at one of the League's military training centers on New Olympia. During his time there, his outspoken and easily offended nature showed, which led to six separate honor duels. He graduated in 2979, shortly after his twenty-first birthday. He received both his commission as a lieutenant in the Free Worlds Guards and a Rifleman from his father. Janos later left the Guards to take over command of the 1st Atrean Hussars. His time as commander of this unit did nothing to improve the pedigree of the unit.[4]

In 2988, an officer in the Orloff Grenadiers attempted to entangle Janos in a plot against his father. The military coup was crushed in its infancy, resulting in the death of Duchess Morgaine Humphreys in 2989.[4][5]

When Stephan Marik died of cancer in 2991, Janos succeeded him after giving a long eulogy. He was confirmed on 2 September, at the age of 33.

Tragedy struck him in 2994 when his wife, Hilda Lauber Marik, died. 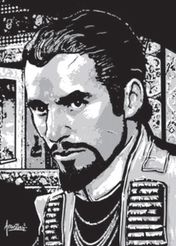 On May 22, 3014, Janos' brother, Anton Marik formally declared war against his brother's reign. He did this with support from Maximillian Liao, who was attempting to destabilize and to weaken the Free Worlds League.

Calling Janos a "madman" and "tyrant", Anton called upon all the provinces of the Free Worlds League to join his rebellion. Although many units and systems did indeed flock to Anton's banner, it was far less than what he'd expected. Rather than be devastated by his brother's betrayal, the war reenergized Janos, who rallied his forces, soon putting Anton's supporters on the defensive. Were it not for the services of Wolf's Dragoons, all would have been lost for the rebels.

By February 3015, the rebels controlled only a few remaining systems. The strain upon Anton was tremendous, and it started to show. At his headquarters on New Delos, Anton met with Jaime Wolf, ordering the mercenary commander to break his unit down into company-sized forces, and distribute them among the remaining rebel troops. Anton had hoped that this would slow the advance of Janos' forces. Jaime Wolf refused, citing the contract that had been signed. This led to a fallout between Anton and Wolf's Dragoons with devastating consequences.

Soon after Anton ordered the arrest of Jaime's brother, Joshua Wolf and 27 other Dragoon personnel and dependents. It would not be revealed until years later that Jaime Wolf's wife and two daughters were also among those taken. The prisoners were soon executed.

Anton then sent a message to Jaime Wolf, announcing the arrests while concealing the executions, and using the prisoners as hostages.

Wolf's response was swift; the enraged Wolf's Dragoons descended on New Delos. After three days of fighting, Natasha Kerensky led her Black Widow Company through a forest fire, attacking the rear of Anton's palace and ultimately killing him as a wall collapsed upon him.

In recognition for the losses that Dragoons suffered on Wyatt in 3016, Captain-General Janos Marik sent Jaime Wolf a gold and firestone right engraved with "In memory of Sendalor". The Sendalor was an Overlord DropShip that was shot down by Lyran fighters in evacuating Dragoons forces. A battalion of troops were on the Sendalor when it crashed.[7]

In 3018 he attended the first live-fire exercise of the unsuccessful Liberator BattleMech.[8]

In 3024, in direct response to the FedCom Accords, Takashi Kurita brought together unlikely allies Janos and Maximilian Liao to sign the Concord of Kapteyn. This was an agreement of mutual support against their common enemies, House Davion and House Steiner. Though some back and forth raids would continue between the Confederation and the Free Worlds League, the agreement held in principle. As policy, however, it would prove ineffective during the Fourth Succession War, due primarily to incompetent maneuvering by the FWLM.

He, along with his son Duggan, were assassinated via an explosion in 3035 by his nephew, Duncan, during a strategy session concerning the Andurien Secession. His son and heir, Thomas, was also thought to have been killed in the explosion, which allowed Duncan to briefly seize the throne.[citation needed]

In his younger days, Janos was considered by many to be optimistic and somewhat naïve. The various hardships he experienced during his life hardened him to the point of bitterness and cynicism. His various failed offenses against his neighbors indicate he was not able to overcome the inherent lack of unity in his military. His actions during the Fourth Succession War demonstrated a pettiness that ultimately cost his realm significantly. Nevertheless, he successfully prosecuted the civil war against his brother, and notwithstanding the Andurien secession, the League was stronger and more unified at the end of his reign than it was at the beginning. Perhaps his greatest flaw was simply in comparison to his contemporaries from the latter Third Succession War. He possessed neither the genius of Hanse Davion, the vision of Katrina Steiner, the will of Takashi Kurita or the manipulative cunning of Maximillian Liao.