The novel picks up the story of the Gray Death Legion three decades after the recovery of the Helm Memory Core that catapulted the unit to fame. Grayson Carlyle and Lori Kalmar are still leading the unit, but many of the old members have retired and a new generation is taking over.

Ever since surviving the treachery on Helm twenty-eight years ago, the Gray Death Legion has been in the employ of House Steiner, who gave them Sudeten as a landhold. However, in the Clan invasion Sudeten was overrun and the Legion resettled to Glengarry. Alexander Carlyle is one of the cadets in training, and groomed to inherit command of the unit one day.

April 1, the day of the recovery of the Helm Memory Core and the conclusion of the Helm campaign, is celebrated as a holiday within the Legion called the Day of Heroes. But in 3056 Colonel Grayson Carlyle and his wife Lori cannot attend for the first time in a quarter of a century because they have been summoned before Prince Victor Steiner-Davion on Tharkad: Carlyle is made a Baron and receives Glengarry as his fief.

In their absence, and with a large share of the unit posted to Borghese, Glengarry is garrisoned only by a skeleton force of Gray Death Legion personnel under Major de Villar. An invasion force of Free Skye separatists under General-Kommandant Wilhelm Friedrich von Bulow descends on Glengarry, claiming that House Davion's influence over the Federated Commonwealth is in violation of the Lyran Commonwealth's constitution and legally null and void, and that von Bulow consequentially remains the appointed Baron of Glengarry. The coup is backed by Richard Steiner and Ryan Steiner.

Governor General Roger DeVries, a former free trader whom Carlyle had installed as head of government on Glengarry specifically because he as an outsider would be above the politicking among the planet's minor nobility, has since developed a genuine care for the planet. He considers a defense against von Bulow's powerful force hopeless and does not want to see Glengarry's infrastructure damaged by pointless fighting. Consequently, he first stalls for time and eventually has the on-planet senior officers detained after negotiating a deal with von Bulow. However, DeVries' daughter Caitlin is also a cadet with the Gray Death Legion. She happens to find out what he is doing and manages to send the other cadets a warning. This allows senior tech Major Alard King and the cadets to stage a rescue in their BattleMechs, free the prisoners and reassert control over their base. Major de Villar and one of his sons die in the fighting; DeVries escapes in a VTOL.

The Gray Death Legion cannot know where von Bulow intends to land his forces. They lead von Bulow to believe the mercenary insurrection against DeVries was put down, to lure him into the capital of Dunkeld and spring a trap on his unsuspecting forces when they land. The ambush plan, which includes moving the DropShip Europa to a hiding place in the mountains and luring the attackers towards the grounded DropShip Medea which has been rigged to explode, is successful and vanquishes von Bulow's vanguard forces. In response, the splits his large force up to establish bridgeheads at three different landing sites ("Operation Trident"). These are engaged by picket forces, and the Gray Death Legion uses the planetary maglev rail system to quickly redeploy their forces from the capital to wherever they are needed. In this fashion, they narrowly manage to defeat the landing forces at Loch Sheol and Coltbridge (both of which turn out to be diversionary raids) with losses.

Governor General DeVries, now mistrusted by both sides of the conflict, suggests to evacuate the core of the Gray Death Legion including his daughter and himself aboard the Europa and make for a JumpShip working for him to escape the defeat that he feels is inevitable. Carlyle declines, as he has other plans for the DropShip.

(The storyline is continued in the novel Tactics of Duty) 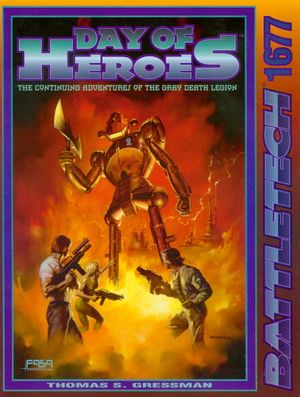 A companion sourcebook, Day of Heroes, was published in the same year. It provides background information on the Gray Death Legion's history from its inception through the Blood of Heroes novel and even beyond the novel, narrating the continuation and ultimate outcome of the rebel attack on Glengarry (novelized in the follow-up novel that was published two years later) and providing boardgame scenarios recreating pivotal battles.