The 2nd Royal Guards were an elite military formation in service to the Lyran Commonwealth and Lyran Alliance, as well as the united Federated Commonwealth during its brief existence. Usually based on the capital of Tharkad, the 2nd Royal Guards were often assigned to the less-glamorous assignments as opposed to the First Royal Guards, such as protecting Tharkad's military industries and coordinating with planetary militia units. Although rarely seeing significant combat, the 2nd were able to maintain a high experience level through the regular rotation of veteran officers and soldiers into and out of its ranks, with the exception of top commanders. [1]

Historically, the 2nd Royal Guards drew its soldiers from the Federation of Skye region. Despite the political difficulties of that region, the 2nd has been regarded as fanatical as the other Royal Guard commands to the Lyran state. During and after the Federated Commonwealth era, this policy was relaxed. [2]

The 2nd Royal Guards were one of the many Lyran Commonwealth Armed Forces units revealed to have extensive ties to criminal cartels during Operation CATALOG, with the regiment's executive officer, his lance mates and half the unit's regimental supply officers all arrested or dishonorably cashiered. Aside from the blow to the regiment's prestige, the unit's readiness was below par thanks to the large influx of new recruits and abrupt promotions in the wake of CATALOG, additionally hampered by the LCAF's efforts to ensure the loyalty of the newcomers to Commonwealth as a whole and House Steiner ahead of Skye.[3]

As of 2765, the Second was stationed alongside the First Royal Guards on Tharkad.[3]

Prior to Archon Giovanni Steiner's death in 2980, his son, Alessandro Steiner, was a battalion commander with the unit. [4]

In 3001, Katrina Steiner, Alessandro's niece, was transferred in to command the 2nd Royal Guards. She commanded the regiment for three years before she was transferred to the Strategies and Tactics Division. [5] [6]

Edward Regis, who would eventually become General of the Armies under now-Archon Katrina Steiner, once commanded the 2nd Royal Guards, during which time he was awarded the McKennsy Hammer for his leadership of the unit. [7]

The unit defeated House Davion's 3rd Ceti Hussars in a mock battle during Operation Thor in 3027.[8]

The 2nd Royal Guards spent the entire Fourth Succession War protecting Tharkad, even as the 1st Royal Guards were temporarily relocated to Skye. [10]

The Federated Commonwealth raised the 2nd Royal Guards to Regimental Combat Team level, permanently attaching brigades of armor and infantry as well as Aerospace assets. During the War of 3039, they remained on Tharkad with the 1st Guards. [11]

As of 3050, the 2nd Royal Guards were based on the Lyran capital of Tharkad. [12] They remained on Tharkad through 3054, though by then, their quality level had improved to veteran. [13] The unit seemed to experience no reservations in transferring their loyalty from Archon-Prince Victor Steiner-Davion to Archon Katherine Steiner-Davion and the Lyran Alliance Armed Forces.

The Second Royal Guards saw very little action in the early stages of the FedCom Civil War, instead forming an armed camp on Tharkad along with the First Guards and the ComGuards' 66th Division.

In August 3066, when Morgan Kell and Peter Steiner-Davion arrived in-system with a pan-Lyran invasion force to stake Peter's claim to the throne, the Loyalists would be joined by the by the battle-tested 11th Arcturan Guards and the 1st Alarion Jaegers. The invaders neutralized the defenders WarShip defenses and landed their ground forces, including the First Kell Hounds, the Twentieth Arcturan Guards, the 1894th Light Horse Regiment and 21st Rim Worlds from the Blue Star Irregulars, the Golden Keshik and Fourth Wolf Guards from Clan Wolf-in-Exile. The 2nd engaged the Wolves in the Methow Valley. Despite outnumbering the Clan warriors, the 2nd pursued Khan Phelan Kell who led his warriors into Stahlwurzel Forest, where the Wolves spent a week brutally mauling the Loyalists. The 2nd fell back to Tharkad City. [14]

Both sides were reinforced before the campaign reached its conclusion. The 4th Skye Rangers, after the failure of the 3rd Skye Rebellion, joined the Allies while the 24th Lyran Guards arrived to aid the Loyalists. The 2nd was held back in Tharkad City when Nondi Steiner attempted to take the offensive against the Allies, and when the Loyalists began collapsing, Nondi attempted to hold out with the Second, engaged in street-to-street fighting in the capital city itself. Vastly outnumbered, the 2nd refused to surrender, and was effectively destroyed as a combat effective unit. Nondi Steiner herself was killed on 2 April, 3067.[14][15]

Archon Peter refused to disband either Royal Guard commands, instead beginning a crash rebuilding program. Despite this, some of the survivors continued to resent owing fealty to Peter, who had shattered them months earlier. Many of its members chose to resign. [16] By the beginning of August, the Second had been rebuilt to only 20 percent strength overall, with barely a company of 'Mechs. [16] [17] 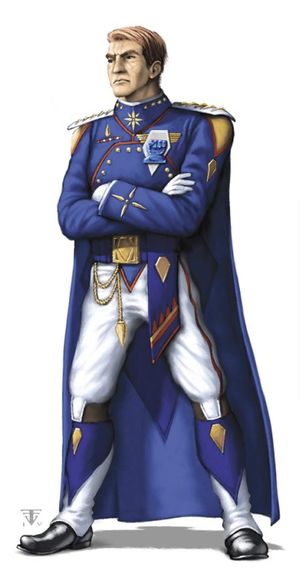 When the Word of Blake attacked Tharkad after the Fourth Whitting Conference, many of the Lyran units on planet were shattered by the orbital bombardment. Archon Peter merged the survivors of both Royal Guards into a single command, and they defended him throughout the campaign. Suffering severe losses over the course of years of guerilla fighting, the Royal Guards were constantly reinforced by soldiers from other commands on planet who the Archon transferred in, refusing to disband his illustrious unit. Despite being reduced to less than a ghost of their prior selves, the Guards did successfully protect the Archon from death or capture. [18] In the aftermath of the fighting on Tharkad, the Second essentially existed only on paper, composed of a single lance of the best MechWarriors that defended the capital. By September 3079, they were still at only five percent strength, even while their sister unit, the First, was rebuilt by absorbing militia units. [19]

By 3085, the 2nd had grown. The LCAF High Command forwarded many elite soldiers to the unit for consideration. These soldiers then took a series of tests to see if they had what the Second Guards were looking for. Anyone who failed these tests didn't make it into the unit. The 4th Royal Guards performed the same tests, but out of respect for the 2nd's history, the 4th didn't recruit many soldiers from Skye. Instead they went to the 2nd for their evaluations.[20] Even with these high standards, the Second had managed to rebuild to over a third of its nominal strength.[21]

Unlike previous iterations of the 2nd Royal Guards, the Pride of Skye of 3085 is expected to perform more than ceremonial duties. To prepare to join their sister units in the field, the 2nd trains against the 4th Royal Guards.[20]

In 3143 Clan Wolf invaded Tharkad. The 2nd Royal Guards defended the Nagelring from the Wolves, but lost two companies of machines.[22] In addition to the Nagelring fight, they also defended Tharkad City. After the fighting on Tharkad the unit was reduced to fifty percent of its nominal strength. With the creation of the Wolf Empire so near Tharkad, the LCAF High Command left the 2nd to reinforce the 1st Royal Guards on Tharkad.[23]

Note: At this point in time the heavy-weight unit was stationed on Tharkad. In 2821 the command was reduced to 57 percent of its strength and was deployed on Tharkad. [28]

Note: At this point in time the heavy-weight unit was stationed on Tharkad with an operational readiness of 97 percent. [29]

Note: At this point in time the assault-weight unit was stationed on Tharkad with an operational readiness of 39 percent. [29]

Note: At this point in time the command was stationed on Tharkad. [11]

Note: At this point in time the command was stationed on Tharkad. [30]

Note: At this point in time the command was stationed on Tharkad. [31]