Although a number of "official" mapsheets exist for BattleTech, players are by no means required to use these. The game can be played on essentially any terrain. Players are free to create hex-based terrain to play on, and earlier mapsheets had blank flipsides with hex grids on which players could draw terrain features as desired. Various fan organizations and third parties have created custom mapsheets for tournaments or general gaming. 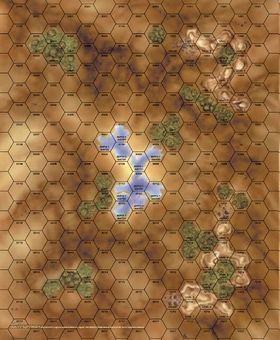 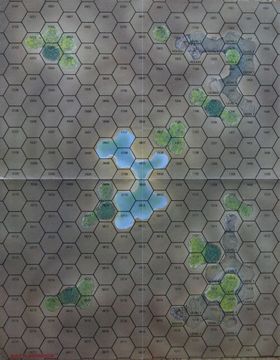 The standard mapsheet layout has remained unchanged from the original BattleDroids edition through to the latest editions, though there have been cosmetic changes. The printed size of a standard mapsheet is 22 inches by 18 inches (not 22 by 17 as many rulebooks suggest).[1]

Several hex maps have been released for various arenas on Solaris VII.

The Solaris VII: The Game World boxed set, published in 1991, included maps for five arenas (with one arena requiring two sheets) , one for each of the major houses.

In 1993 an expansion to the aforementioned boxed set was published as the sourcebook titled Solaris: The Reaches. Five additional hex maps were included.

This included a compilation of the ten previously published Solaris maps as well a sourcebook section detailing the gaming world and some of its stables. Special rules are provided for playing on certain maps.

In the wake of the Dig, Defend, or Die 2018 Worldwide Event, a series of related PDF products was released by CGL that included the scenario's Terrain Set of four newly created maps under the "Map Pack" moniker. Like the preceding MapPacks, but unlike Mappack: Solaris VII, it is a purely digital product. It was published for free.

A map set focused on the Battle of Tukayyid, with four double-sized, 34” x 22", two-sided paper maps.

The beginner boxed set includes one unique, double sided 18″ x 22″ full-color game map, with maps called Grasslands #1 (Side A) and Desert #1 (Side B).

BattleTech: A Game of Armored Combat[edit]

(see BattleTech: A Game of Armored Combat for full article)

BattleTech: A Game of Armored Combat

A high-quality neoprene map set (34"x 22" Inches) featuring different terrain, including biomes including Desert, Luna, Alpine, Savanna and Tundra. The set was created to complement the BattleTech Map Pack: Grasslands that was released shortly after this set, and also including a number of these grassland maps on the reverse side of the Battlemats.[7] 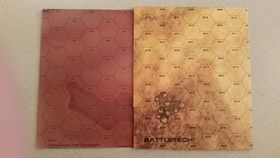